Earlier today, Betabeat ventured downtown for a tech-world double whammy: Not just Mayor Michael Bloomberg, but also Google chairman Eric Schmidt were scheduled to speak. The pair were stopping by the joint headquarters of Boxee and Sidetour for a quick check-up on the state of New York tech.

After a barrage of stats illustrating New York’s rise to tech superstardom–for example, between 2007 and 2010, the number of employees at New York City digital media companies has grown 74 percent–Mayor Bloomberg segued into the news, such as it was.

“But we know that leadership can’t be taken for granted–we made that mistake before and we’re not going to make that again.” Hence the necessity of the conference. “If we want to keep our competitive advantage in both New York City and in America, we have to bring together  the best ideas from the people who know the industry best.”

That also explained the presence of Mr. Schmidt, who spent much of the press conference leaning against the wall next to the mayor, Arthur Fonzarelli-style, and drinking a fully caloric Coca Cola classic. Tut tut, Mr. Schmidt–don’t you know we’re in the midst of a war on obesity?

“It was a vibrant discussion,” Bloomberg informed us all. And while he’s the number-one cheerleader of the New York tech scene, he admitted that “from the East Coast to the West Coast, tech companies are facing similar challenges and opportunities, and we’re all in this together.” In short, everybody’s got to pull together if Team America is going to remain on top.

Then out came the barbs: “Now, unfortunately, not much is being done in Washington to ensure that.” There are things that can be done at the local level, however–“We know it because we’ve done it,” said Mayor Bloomberg.

But he wasn’t done negging Washington, later going on to elaborate, “Washington is spending all their time talking about tax rates. Here in New York City, we are spending all our time trying to help people get businesses started.”

Nonetheless, “every day brings more good news,” he added, mentioning this morning’s announcement from Square that the company is acquiring Soho-based design firm 80/20. As for that cab ride, “the driver was happy–the driver pointed out that with this technology he seems to get bigger tips.”

“I can’t tell you how easy it was,” Mayor Bloomberg added.

Square’s New York office is going to be awfully convenient when the city’s existing contract with Verifone expires in a few months–a legal barrier which the mayor as good as admitted was the last thing standing between seeing some new technologies in the back of yellow cabs.

After Boxee CEO Avner Ronen briefly thanked the mayor for stopping by “our modest office,” Mr. Schmidt stepped up to the podium and turned the urban boosterism on high: “In order to believe in the future of America you have to believe in innovation, and when you study innovation now, you understand that innovation occurs in cities.” That, however, typically requires the right alchemical elements: money, the right people and the right leader–we’re sure you can guess who he was referring to there.

“What we see over and over again is a commitment to make New York City a viable alternative to Silicon Valley and a place where true innovation occurs for the global good,” he added. Here’s hoping, anyway. And with that, Mr. Schmidt returned to his station at the wall.

But he wasn’t entirely done–a cheeky CNET reporter attempted to sneak in a question regarding the state of Google Maps and its uncertain future on the iPhone. Mr. Schmidt, however, demurred. “This is the mayor’s forum,” he said. 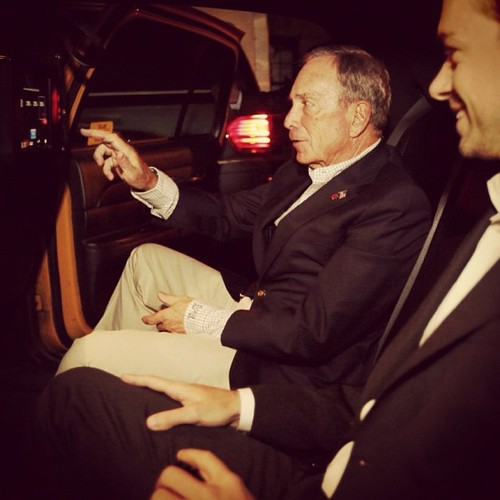