A screengrab from the “October Surprise” site. (Photo: OctSurprise.com)

Earlier, a mysterious website popped up online promising to reveal an election “October Surprise” document drop showing that one of the “presidential candidates isn’t being honest.” The site is nothing but a countdown clock and accompanying Twitter account promising all will be revealed at 5:30 p.m. on October 22. On Twitter, the unknown people behind the site have claimed they’re “not at liberty to say which campaign this affects, just yet” and that the site “has the propensity to turn this election from a nail-biter into the biggest electoral landslide.” They have also posted tantalizing blurry photos of documents to back up their claims. Politicker was able to identify at least two people involved with this secretive “October Surprise,” and we spoke with one of them earlier this afternoon.

Jeff Hopwood is a developer based in the Midwest. We connected him to the “October Surprise” through the BuzzFeed account used to post the blurred documents tweeted by the “Surprise” site. That account, WIOWSA, was previously used to post a link to another website, Partislator, that tracks other political tweets. That post has since been deleted. A Daily Kos contributor named “partislator” also promoted a site called WhatIsOccupyWallStreetAbout.com, which has since been deactivated but was registered with Mr. Hopwood’s email address and phone number. When we called Mr. Hopwood today, he confirmed he was involved with the “October Surprise” site, Partislator and WhatIsOccupyWallStreetAbout.com, but he denied knowing anything about the coming document drop.

Mr. Hopwood said that, in spite of his past work on Occupy-related sites, the “October Surprise” site is not connected with Occupy Wall Street.

“It’s nothing involved in Occupy. We ended up using a BuzzFeed account because of last minute type things, and that account had some other things on it,” said Mr. Hopwood adding that the other activity has since been removed.

According to Mr. Hopwood, the “October Surprise” site was the work of “a group of developers that I’m friends with,” one of whom had been contacted to create the site by a third party. Mr. Hopwood claimed not to know anything about the people who asked him and his friends to make the site. His only stipulation for them was that the documents that will be revealed cannot be hosted on his server along with the site, because he claims not to know their contents.

“I don’t know the identity. I don’t know anything, political affiliation or anything like that,” he said. “Myself, like I said, I’m kind of limited involvement, and I’m trying to figure out what is going on myself, because it’s on my servers.”

There has been some speculation that the site may be part of a viral marketing campaign. Mr. Hopwood said he thinks this may be true because he and his friends were asked to put together the site fairly quickly, and he believes a political group would have been “more professional.”

“I tend to think it might be some type of marketing thing because of the way they contacted us,” said Mr. Hopwood, adding that he and the other developers put the site together in “like a half an hour.”

Mr. Hopwood’s hunch isn’t the only indication that the “October Surprise” site may be connected to a viral marketing effort. According to his LinkedIn page, Mr. Hopwood is a “Creative/Technical Developer” at Discovery Communications, which runs the Discovery Channel and other associated TV networks. A reverse IP address check for the site shows it is connected to the IP address of another site called “Pausetime.com,” which was registered by Anthony Maro, who is identified on LinkedIn as a “Senior UI Developer at Discovery Communications.”

We reached out to Animal Planet spokesman Matthew Windsor to ask if the network is involved with the “October Surprise.” He claimed not to be aware of the site and promised to get back to us with more information once he was able to “check with our digital team.”

Discovery isn’t the only connection between Mr. Hopwood and Mr. Maro. In an internet concert forum, the pair was identified as being behind a 2007 countdown hoax site that promised the release of a new Radiohead album but instead revealed a message containing the lyrics to Rick Astley’s 1987 song “Never Gonna Give You Up,” which is often sent to people who are expecting something else in a common internet prank known as “Rickrolling.”

“THE MOST GIGANTIC LYING HOAX OF ALL TIME,” the site said. “How to RICKROLL 21,232 people at once. REAL LP7 coming soon!”

The post naming Mr. Maro and Mr. Hopwood as responsible for the Radiohead hoax was deleted last night by a user identified as “Anthony Maro” in his profile.

In many ways, Mr. Maro and Mr. Hopwood’s long digital trail reveals as many questions as it does answers about the roots of the “October Surprise” site. The pair has been involved in cable television sites, digital hoaxes and the creation of political sites. Only time will tell which category this “October Surprise” falls under. Whatever it is, the site certainly has generated quite a lot of attention.

Update (10/19/12 12:36 p.m.): A few hours after they were outed, the people behind the “October Surprise” site published a note admitting they were indeed planning a Rickroll prank. 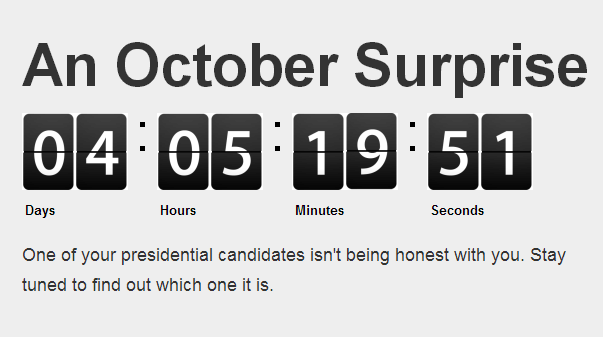