MONTCLAIR – State Sen. Joe Kyrillos (R-13) presented himself as the embodiment of change in his NJTV debate with U.S. Sen. Bob Menendez (D-NJ) tonight, while the incumbent Democrat sought to paint his challenger as a return to disastrous economic policies.

“If you think things are okay, you’ll choose my opponent. But if you think unemployment and the national debt doubling are unacceptable then you’ll choose me,” said Kyrillos as part of his opening statement in this NJTV/Bergen Record/Montclair University-sponsored clash.

“The middle class is not doing very well at all,” the Republican added. “I read the press releases you put out, but I don’t hear any action items about how we’re going to do it better. More of the same means the same outcome. Let’s do some things differently.”

Menendez said, “My opponent would take us back to the policies that got us into this mess in the first place. That’s the biggest disqualifier.”

Leading by double digits in most polls, the Democratic senator characterized Kyrillos’s record as tax cuts for millionaires accompanied by cuts to women’s healthcare.  “I listen to his jobs program, which is a rehash that didn’t drive us to the kind of job creation we want to see, and that’s fatal,” Menendez said.

Kyrillos said he wants lower business tax rates. “My opponent supports a plan that will increase the rates for everybody,” the state senator said. “When that happens you can be sure we’re going to lose jobs. The debt crisis is a severe one. We look at everything through a prism of what do we need, and what we want but really can’t afford.”

Menendez insisted lowering corporate rates must be offset by closing loopholes, pointing out that he opposes off-shore tax havens enjoyed by Mitt Romney.

Kyrillos complained about partisanship killing Washington, D.C., and blamed Menendez for contributing to it.

Menendez denied the characterization, arguing that he reached out to the Republican senator from Wyoming to pass a bill that became the Combating Autism Act, and worked with the other side to secure crippling sanctions on Iran by 100-0 vote.

“He never joined (with Democrats) to seek an override of the front office,” the U.S. Senator jabbed.

Answering a question posed by NJTV’s Michael Aron, Menendez denied he has a poor working relationship with Gov. Chris Christie.

“We’re talking about the ability to communicate with the governor, whoever he is, to produce positive outcomes, and when I talk to people around the state, that’s not what I hear,” Kyrillos said. “These guys (Menendez and Lautenberg) don’t get things done.”

On a foreign policy question later, “I’m going to make sure Iran never gets a nuclear weapon,” Kyrillos said. “I hope the folks in Washington understand what’s at stake. I find it inexplicable the prime minister was in New York, an Amtrak ride away, and the president refused to meet with him.”

Kyrillos worried about definite timelines on Afghanistan and suggested White House withdrawal plans might be built around election intentions.

Also opposed to Iran obtaining a nuclear weapon and with the sanction vote accomplished, Menendez reminded people he voted against the War in Iraq, and applauded the Afghanistan draw-down, saying , however, it might be too slow for his comfort.

The challenger declared his interest in Supreme Court judges who are not predisposed to legislate from the bench. “I will look to nominees from whichever party,” he said.

Menendez needled Kyrillos for not being a solid pro choice candidate and added, “I don’t want to see more Justice Scalias who say discrimination against women is not protected under the Constitution.”

Elements of the Affordable Care Act Kyrillos said he supports, including pre-existing conditions coverage and allowing college students to stay longer on their parents’ healthcare.

“But this law comes at a very high cost,” he added.

“He has been in Trenton for 24 years,” Menendez said in response to identifying Kyrillos’s effort to lay the national economic crisis at “my doorstep.”

The challenger charged Menendez with being absent when Fort Monmouth closed. “Senator, I’m not sure where you were in that fight. I didn’t see you,” Kyrillos said.

Menendez slapped back at Kyrllos for standing on the wrong side of the Access to the Region’s Core (ARC) project, which Christie killed.

On abortion, the sitting senator reiterated his unabashed pro choice position, and derided Kyrillos for being “multiple choice.”

“It’s a very, very serious subject,” the Republican said. “I voted for and advocated for some pro life initiatives. At the end of the day, people have to make up their own mind. I believe in parental notice for teenagers. And I don’t believe in late trimester abortions.” 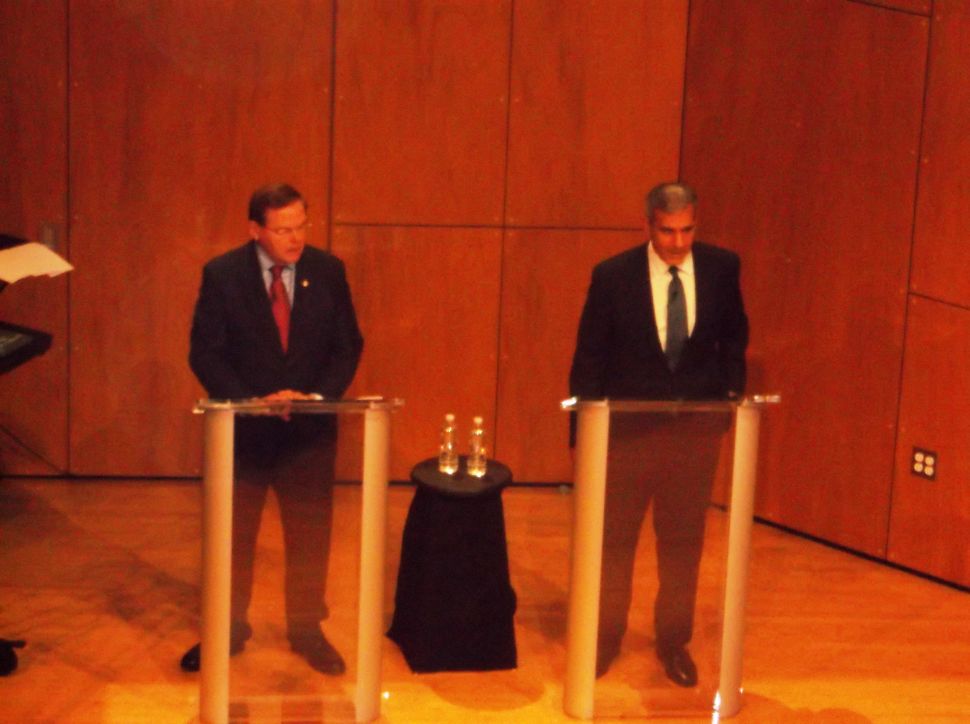