PISCATAWAY – With Florida a battleground and President Barack Obama losing to GOP challenger Mitt Romney in today’s Monmouth University poll, U.S. Sen. Bob Menendez (D-NJ) said he won’t campaign in the Miami-Dade area as he did in the closing days of the 2008 general election.

“No,” the senator said in response to a PolitickerNJ.com question. “I’m going to be in New Jersey from now until Nov. 6th.”

Menendez has his own race to focus on, a showdown with GOP challenger state Sen. Joe Kyrillos (R-13).

“Two more weeks – 15 days to be exact, but who’s counting?” the senator cracked.

He’s leading Kyrillos by double digits in most polls.

Four years ago, on a personal request by Obama, Menendez spent the last full week of the season campaigning in the Sunshine State, reaching out to Cuban Americans in the Miami-Dade area.

“As I campaigned I encountered people who would privately show me an Obama sticker in the palms of their hands and tell me they intend to vote for Obama, but can’t say it out loud because of peer pressure,” Menendez told PolitickerNJ.com at the time.

Today, receiving the endorsement of the American Federation of Teachers (AFT-NJ) and the Rutgers American Association of University Professors (AAUP-AFT), the incumbent Democrat took a swipe at Republican presidential nominee Romney.

Romney and Obama are scheduled to face each other tonight for the last debate of the general election cycle. The subject is foreign policy.

“I get a sense of adventurism abroad again,” said Menendez, noting his own nay vote on the War in Iraq a decade ago. “I listen to Governor Romney and some of the things he’s said about Syria and Iran… loose talk. He seems willing to be engaged rather easily. He doesn’t appreciate how serious that is.”

Menendez co-sponsored a resolution stiffening sanctions against Iran, which is supported by the President.

In the vice presidential debate, speaking to Republican VP challenger Paul Ryan’s insistence that America needs to do more to stymie Iran, Vice President Joe Biden indicated the crippling sacntions and asked him if the next step to him was going to war. 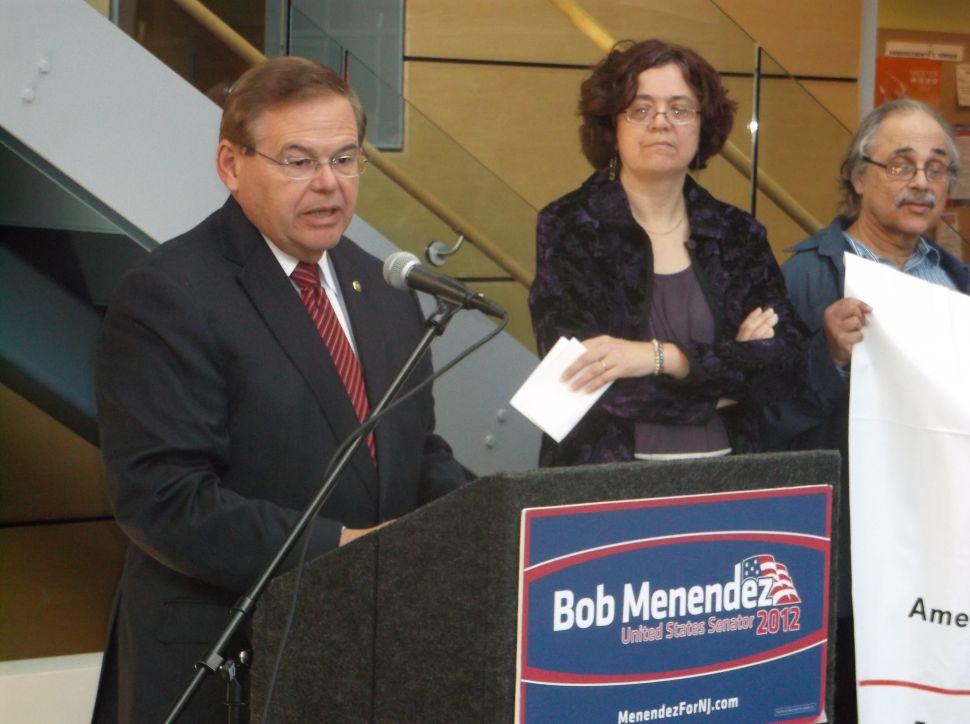