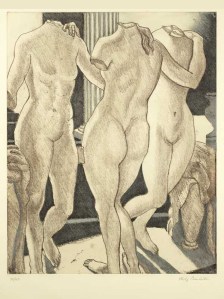 ‘The Three Graces’ (2007) by Pearlstein. (Courtesy the artist and Mezzanine Gallery)

Though the art industry was slow to embrace the Internet, competition among online art companies has been heating up over the past few years, with Art.sy, Paddle 8, VIP Art (née Fair), Artspace and others honing their models and racing to sign partners to their respective platforms.

Artspace‘s latest get is the Metropolitan Museum of Art. Though it’s not a widely publicized aspect of its operations, since 1979, the museum has offered limited-edition pieces through its Mezzanine Gallery outfit. Its prints, photographs and multiples, by names like Alex Katz, George Segal, Ida Applebroog and Philip Pearlstein, will now be on offer through Artspace.

The Mezzanine Gallery’s print program “provides customers, who are supporters of the Museum,  with an opportunity to be more directly engaged with the arts and artists, which ultimately enriches the entire art community,” the Mezzanine Gallery’s senior manager, Michael Hladky, told Gallerist via e-mail. Funds from sales of the pieces, which are often created in concert with the Met’s exhibitions, go to the museum. Mr. Hladky added that they joined with Artspace “to reach new customers and supporters of the Museum.”

The Mezzanine Gallery’s offerings, typically sold only through its brick-and-mortar shop, are priced between $800 and $10,000. “We’re focused not on the art that you see in the newspapers, at Sotheby’s and Christie’s, but a much broader range of art that many, many people can afford, but don’t have access to,” Artspace’s cofounder and chairman, Christopher Vroom, told Gallerist by phone.

The Met joins some 200 museums and galleries on the Artspace website, including the Los Angeles County Museum of Art, the Whitney, Lehmann Maupin, 303 and Honor Fraser. Mr. Vroom said that the company plans to add partners in India, China, Brazil and elsewhere. “We’re going to give collectors worldwide bridges to connect with great artistic practice all over,” he said, adding, “Selling art over the web is in its early stages, and the institutions are recognizing this is a big opportunity.”