ASBURY PARK – Power boss George Norcross III at least a year ago started telling people that if Newark Mayor Cory Booker entered the gubernatorial contest he would “clear the field.”

In the developing Democratic Party jockeying for governor 2013 that now engulfs every event ostensibly organized for another purpose, Booker hit the requisite rock star poses in front of a dazzled Monmouth County audience.

“Mitt Romney’s favorite singer must be Michael Jackson, because he’s trying to do the moonwalk (with his policies),” Booker told a whooping crowd of 460 packed into the West Ward Community Center rallying for President Barack Obama’s re-election.

When Booker finished and pawed and high fived and high tenned and hugged his way to a side exit, the room didn’t empty exactly, but the speakers in his wake were left to peck forlornly at the crumbs of affection still present in a much thinned room.

Was it that bad?

To be fair, not quite.

Each speaker did his or her level best to find an applause line and did, but Booker showed why many in the party believe he would be the best candidate to challenge Gov. Chris Christie next year. It can be accurately reported that politicians occupied two groups on this morning’s speaking schedule: one group that spoke before Booker and therefore occupied an advantageous oratorical position, and those who spoke after him.

“It’s easy to be a Democrat in Hudson,” Menendez said to growing cheers. “It’s a little more difficult in Monmouth County.”

He was very well received, eclipsed only by Booker, and so was local U.S. Rep. Frank Pallone (D-6).

“If you think Romney is scary, you ought to listen to Ryan,” roared a slimmed down Healy in advance of next year’s mayoral contest.

“I didn’t have a choice,” said the Italian immigrant butcher’s daughter. “I have to believe in America, because America believed in me.”

Locals credited Monmouth County Democratic Committee Chairman Vin Gopal with organizing the event in this seaside county, pop. 600,000, where Democrats have struggled to be relevant.

The place has an infamous political context.

Three years ago, while then-Pennsylvania Gov. Ed Rendell sat behind tinted glass in a rain-riddled parking lot and operatives unsuccessfully worked the phones to haul in more bodies, the only positive sound was the merciful creaking of metal chairs as morose looking teens in Corzine t-shirts closed and stacked to make it look like fewer seats were actually unoccupied.

“Everybody recognized by coming today that Monmouth is an important battleground for this state,” Gopal said. 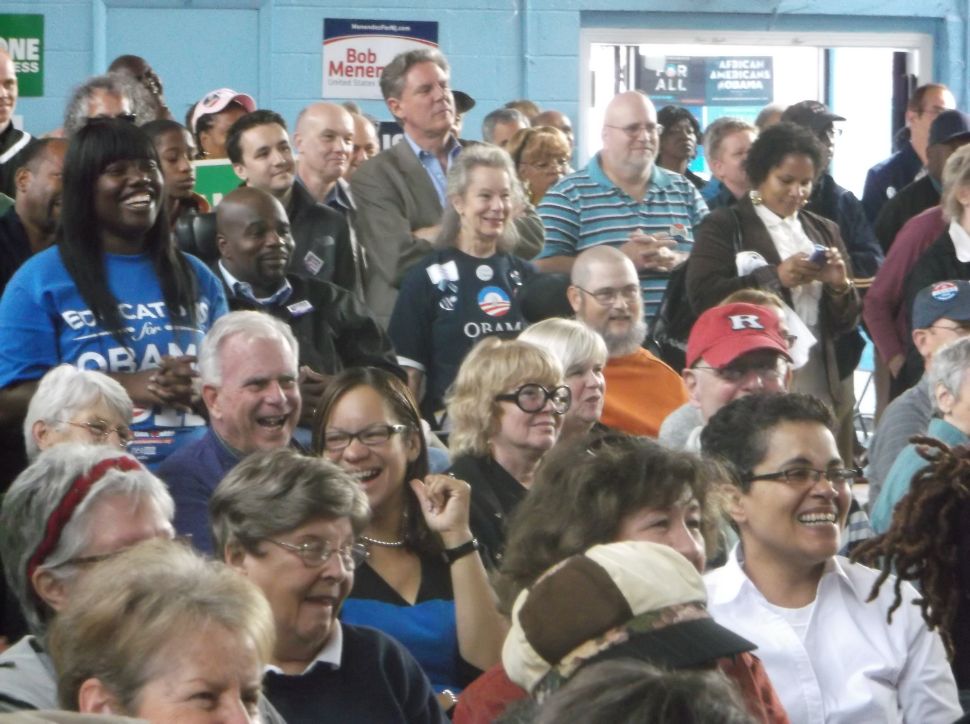