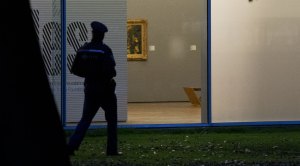 The scene of the crime. (Robin Utrecht/AFP/Getty Images)

A retired Scotland Yard detective speculates on the identity and motive of the thief responsible for the recent Rotterdam art heist: “The volume suggests that whoever stole it owes somebody a lot of money, and it’s got to be a major-league villain.” [NYT via @slaskow]

Could it have been an inside job? [CBS News]

Linda Yablonsky files from Lonodn, and finds advisor Thea Westreich swooning over Robert Overby paintings at Andrew Kreps’ Frieze booth: “‘Wrap it up and ship it,’ she said, sinking into a chair and clearly shopped out. ‘It’s so good I’m exhausted!'” [Artforum]

Ryan E. Steadman on five “white-hot artists that you absolutely need to know about in the fall of 2012.” [Paper Monument]

Private selling exhibitions, Georgina Adams says, are the next battleground for auction houses. [The Art Newspaper]

A $4 million Roy Lichtenstein painting, believed lost, was returned to Barbara Bertozzi Castelli some four decades after it disappeared. [Bloomberg]

French government backtracks on plans to implement a wealth tax on art. [The Guardian]

Praise for the “Picasso Black and White” show at the Guggenheim. [WSJ]

In Paris this week, Matt Mullican will slip into a trance-like state and lecture on his 40-year history of performing. [International Herald Tribune]