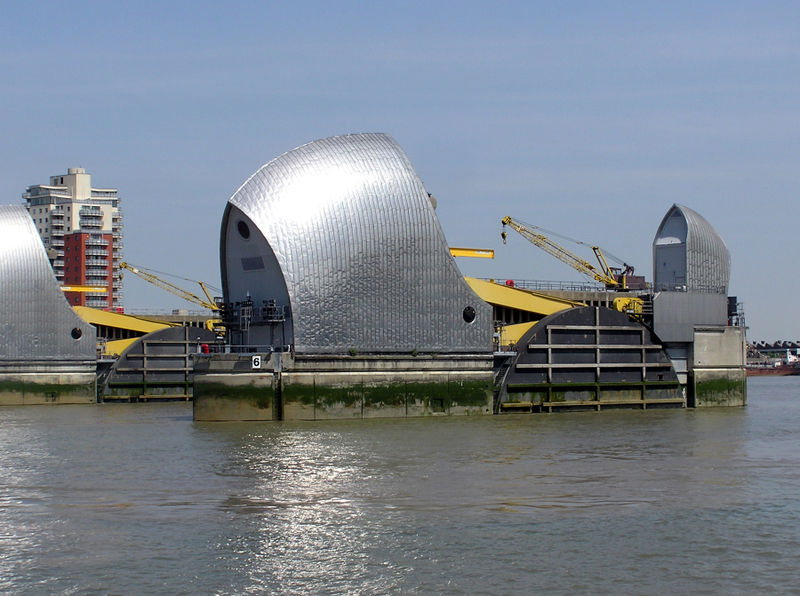 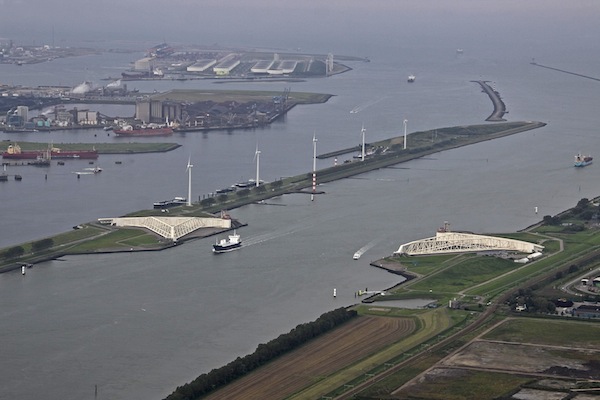 The the Maeslantkering is twice the size of the Eiffel Tower and protects a waterway stretching 393 yards—almost four football fields. (And yes, that little boat is actually giant container ship)
mchabanobserver 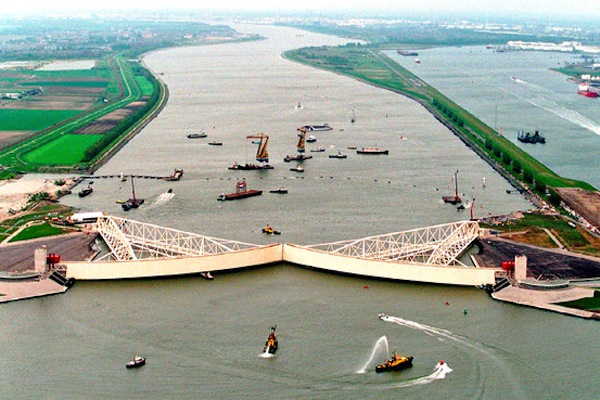 The Maeslantkering in the closed position. Good luck, waves.
mchabanobserver 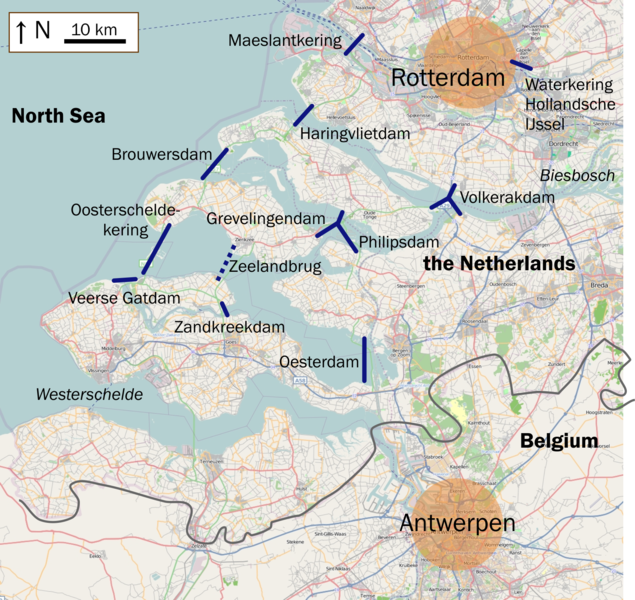 The Netherlands has built a massive system of locks, dams and sea gates to protect the country from storm surges. It has cost billions upon billions of Euros to construct—but also save billions of dollars in damages from storms and countless lives.
mchabanobserver
Advertisement 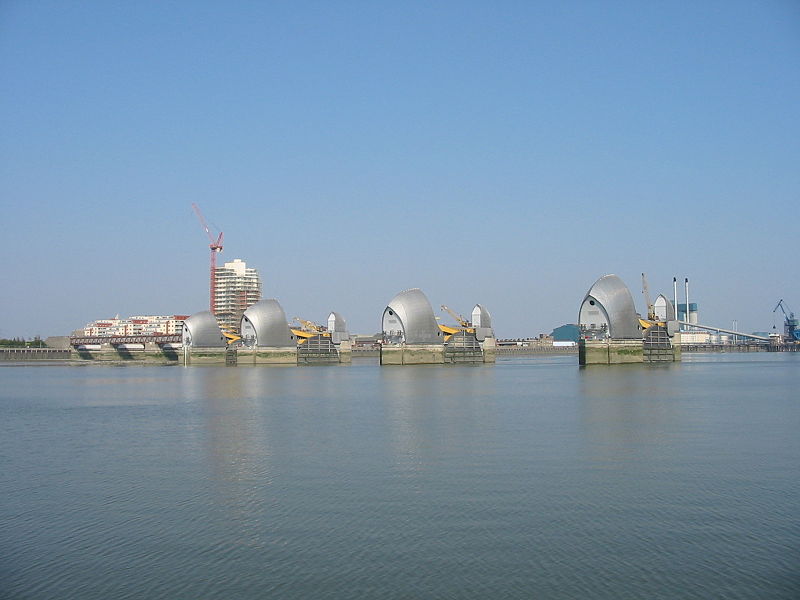 The Dutch are not the only ones. The British created the Thames Barrier following a great flood from the North Sea that inundated London.
mchabanobserver 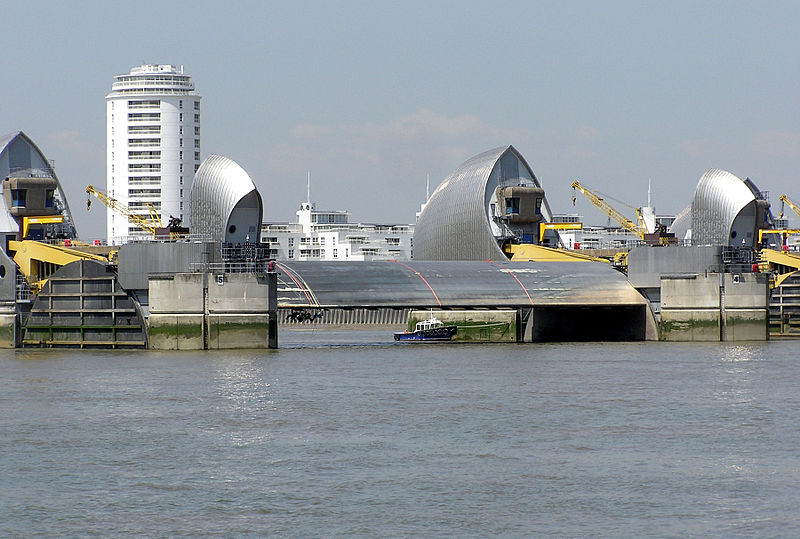 The Thames Barrier has gates that rotate into place to stop water, and boats, from passing.
mchabanobserver 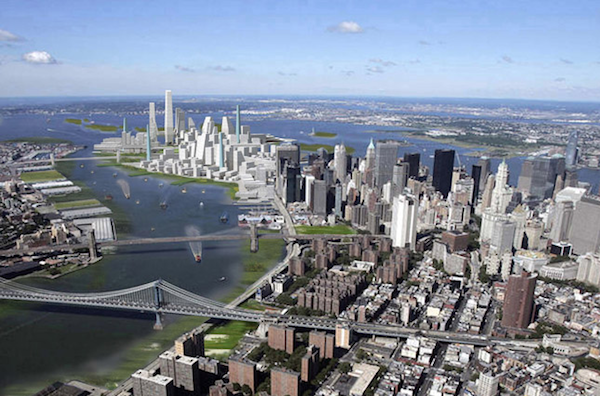 To help protect the city from flooding while also promoting development to pay for all this new infrastructure, Vishaan Chakrabaarti wants to see the creation a LoLo, a new barrier peninsula and islands connecting Lower Manhattan to Governors Island.
mchabanobserver
Advertisement 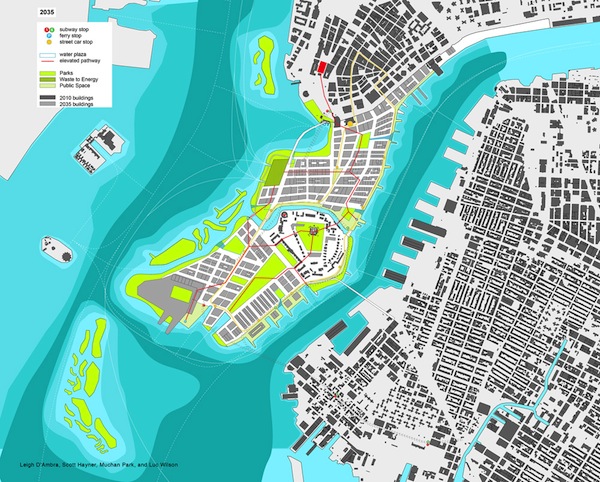 A map of LoLo.
mchabanobserver 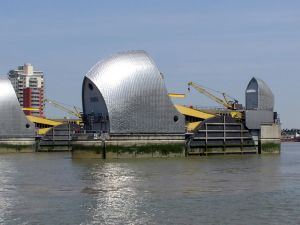 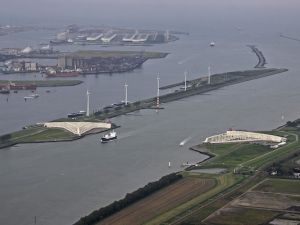 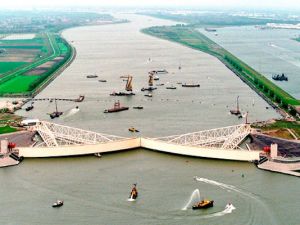 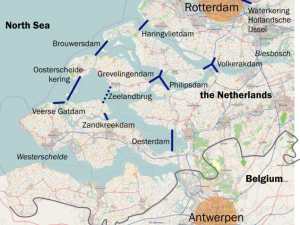 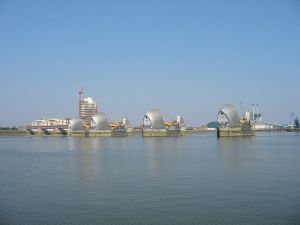 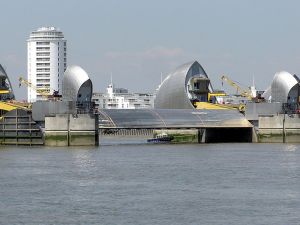 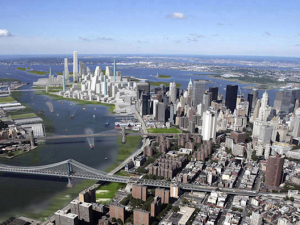 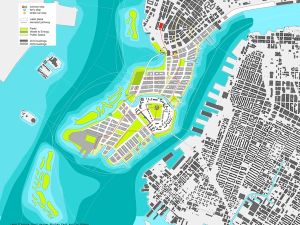 The Observer has been reaching out to urban planners for the past few days now to discuss the issues with our waterfront development in the face of storm surges and rising sea levels. One of the very first people we called was Vishaan Chakrabarti, the director of Columbia’s Center for Urban Real Estate and a partner at SHoP architects. (You can read what others had to think in a story in today’s print edition, as well as in posts still to come.)

Mr. Chakrabarti previously served as director of the Department of City Planning’s Manhattan office, so he was around when much of the waterfront planning by the Bloomberg administration, and the thousands of condos that came with it, were taking shape. Mayor Bloomberg, at least before the storm hit, was fine with things proceeding as they were on the waterfront, with little investment in new protections and infrastructure, while former deputy mayor Dan Doctoroff, who helped hatch many of these plans, wants more of both.

Mr. Chakrabarti has taken a more urgent stance. “The thing we as a city have to understand is, we’ve been promoting all this waterfront development, and most of that waterfront development is happening in the zone that is getting evacuated right now,” he said in a telephone interview. “We’re talking about thousands and thousands of housing units. It’s fine for that housing to be there, but we have to figure out a way to protect it all.”

But Mr. Chakrabarti also has a simple solution. Well, if the world’s largest floodgates would qualify as simple.

It just so happens Mr. Chakrabarti was in Rotterdam when we reached him Monday morning. He had just gotten in on a trip with his students to study the Dutch city’s reclamation of its waterfront after years of industrial semi-neglect (sound familiar?). The idea was to translate the Dutch practices into a model for a new Long Island City, buoyed by the arrival of Cornell’s tech campus. “Rotterdam has some new, extraordinary examples of these new live-work environments, including urban manufacturing, housing and office space all mixed together right on the waterfront,” Mr. Chakrabarti said.

But that was not the near-divine inspiration he had experienced being in the Netherlands’ second-largest city, which also happens to be home to the world’s largest port—one that can ill-afford to shut down, even for the foulest of storms.

“It’s extraordinary to be here, because Rotterdam, in the 1990s, they built sea gates twice the size of the Eiffel Tower at the mouth of the Rhine to protect the city from storm surges,” Mr. Chakrabarti explained. “I think we seriously have to think about doing this in three places probably –at the Verrazano, at Perth Amboy and at Hells Gate–to really protect the city.”

The advantage of such an approach is it allows easy passage for ships while protecting the harbor during the worst incidents. After the storm surge passes, the gates reopen and life can get back to normal. No flooded basements and, especially, no flooded subways.

The costs are obviously astronomical. It was $4 billion to build the sea gate, known as Maeslantkering, or the Maelstrom Barrier, which was completed in 1997. While twice the size of the Eiffel Tower sounds big, the Verrazano Narrows is more than three times as wide as the Rhine span, and that leaves two other gates to be constructed. The cost could easily surpass $10 billion, likely making the kind of damming gates Mr. Chakrabarti is proposing the most expensive infrastructure project ever undertaken.

This is not simply a Dutch tradition. Following the North Sea Flood of 1953, the British built a flood barrier in the Thames. It did not open until 1984,  at a cost of £534 million, which would be £1.4 billion today, or $2.25 billion. So again, not cheap, but also important enough that some of our global coastal rivals have undertaken the investment.

In light of the projections of $20 billion in damages and lost productivity resulting from Superstorm Sandy, it makes more and more sense. Whether this is simply a “storm of the century”-type event or the new normal in an age of global warming can be debated, but even protecting the city from one more storm could make the investment worthwhile.

“Climate change is here, and we clearly have to acknowledge that these unusual weather events are going to become more and more frequent, and we’re going to have to do something about it because we could lose much more than we’re going to save if we don’t invest in the right infrastructure,” Mr. Chakrabarti said.

And he has an ingenious idea to help protect the city while at the same time paying for the infrastructure to protect it. In addition to the sea gates, barrier islands would help protect the city from flooding and storm surges. But rather than building small, disaggregate land masses, Mr. Chakrabarti proposes large islands and peninsulas that can accommodate new development on them. The investment in these new spaces would generate millions, even billions of dollars in tax revenues that would help pay for the critical waterfront infrastructure the city needs.

Specifically, Mr. Chakrabarti came up with a proposal known as LoLo, a 20-acre stetch of in-fill created using dredgings from the harbor—a job the Army Corps already has to do on a regular basis, so why not put that earth to a productive use? Over time, LoLo would be built up around Lower Manhattan, eventually connecting it to Governors Island, which would also become a more vibrant place as it would no longer require a ferry to get to.

“I think we just have to think of this in different terms,” Mr. Chakrabarti said. “And a proposition like LoLo, it could pay for itself. It would be interesting to see if people think twice about that kind of action because we’re going to need to generate the revenue to invest in that kind of infrastructure, and that could do it.”

This is nothing new, either, as Lower Manhattan has spread and spread over the years, most recently with Battery Park City. While that area has become a flood zone because it was not built for these kinds of floods, LoLo could help mitigate the poor planning of the past. And it would help get us back in touch with our Dutch roots!

“They really don’t treat the in this kind of eggshell kind of way that they do in the United States,” Mr. Chakrabarti said. “They reclaim the land, use dredging material, do a whole variety of things to reshape the shoreline, like we first did when we were New Amsterdam. The Dutch have unrivaled experience in dealing with flooding. They really know how to shape the ‘s edge, and I think we really have to rethink the way we deal with the ‘s edge, given what’s happened with Sandy.”

And the city, or at least the state, may finally be prepared to do that. Moments ago, Governor Cuomo said during a press briefing he believed something had to be done. “We have to take into consideration reforming, modifying our built environment, our infrastructure. This city, this region is very susceptible to coastal flooding. It’s not something we had to deal with with any frequency whatsoever. So we’re not built in a way that has the built in protections.

Here’s one idea for you, Mr. Governor.