Rounding the corner onto Schenck Avenue in East New York, the staff of East New York Farms winced a little—the farm’s gate had been wrenched off its hinges and a port-a-potty was lying on one side, but things were not as bad as they might have been. The plants—particularly the long beans—were wind-beaten and crushed in places by fallen branches, but the greenhouse had protected many of the pepper plants and the bees were alive and well in their hives.

“A lot of trellising is down, but we’re almost done with the market season,” said agricultural coordinator Deborah Greig, who walked The Observer through the 1/2-acre farm. Willow branches littered the many varieties of pepper plants, but the plants themselves had been low enough to escape most of the wind’s fury. A large tree had toppled over by the back fence, but it was not a beloved one. Mostly, Ms. Greig had been worried about the bees. “I’m surprised they’re doing okay. It looks like just the brick got blown off the top of the hives,” she noted. In a few hours time, the port-a-potty had been righted, the farm manager was swinging an axe at the fallen tree and the non-profit was planning to hold its scheduled market, the last one of the season, the following afternoon.

The bees at Brooklyn Grange were not so lucky; most of the hives were swept away by the storm surge. “The bees got washed away, flooded out. They were on a pier in the Navy Yard. It was pretty devastating,” said Gwen Schantz, the rooftop farm’s chief operating officer. It was a significant loss: after a successful Kickstarter campaign to raise $22,000 this spring, the Grange had briefly boasted the city’s largest commercial apiary.

“They did great,” said Ms. Schantz. Frightened that the gusts whipping across the roofs might not only dislodge the plants, but the chicken’s penthouse coop, the farm staff had spent several days securing everything before the storm hit.

Gotham Greens, a rooftop greenhouse operation in Greenpoint, also said their plants were doing well. “We’re busy harvesting and sending out produce to our customers. Our greenhouse facility was unaffected by Sandy and our crops are in great
shape,” CEO Viraj Puri emailed The Observer.

The Red Hook Community Farm was under more than two feet of during the storm, executive director Ian Marvy told us. Even the crops that remain after flooding are a total loss and cannot be sold or donated because of pollution. The farm also lost two bee hives; it’s unclear how much of the equipment can be salvaged.

It is likely that flood waters also destroyed Battery Urban Farm in Lower Manhattan. Phones were not working and emails to staffers went unanswered, but reports of extensive flooding on the streets surrounding the farm leave little doubt that the agricultural operations is more than likely done for the season, if not longer.

It was a pattern that played out consistently across the city: the bees, birds and the plants withstood the gale’s winds, but not even the most diligent preparations could stop the floods. Although New York’s space-starved reliance on rooftop agriculture did prove an unexpected boon for operations like the Grange.

And while Brooklynites sometimes take a drubbing for their D.I.Y. ways, having a more robust local food supply is looking more and more appealing after our near apocalypse. Especially when the governor, at a press conference, tells the storm-wearied public that extreme storms are the new normal, a fact that cannot be ignored when the city rebuilds. “Anyone who says there is not a dramatic change in weather patterns is denying reality,” Governor Andrew Cuomo warned.

That food security will be a more important issue in the coming years, as hurricanes and other extreme weather events batter the city, is no surprise to Elizabeth Bee Ayer, the co-manager of Bk Farmyards in Crown Heights. The Farmyards suffered moderate damage from Hurricane Sandy, which blew over collards and kale plants and dropped branches on several beds, although the farm’s bees, chickens and the majority of its produce were not fatally injured.

“Food security is a really big issue everyday for many New Yorkers who don’t have access to fresh fruits and vegetables,” said Ms. Ayer, who supports growing more local, organic foods to supplement the deliveries from major agricultural operations Upstate and on Long Island. “And now the climate is changing and it’s causing larger challenges.”

The farm has struggled with strange weather occurrences for the past three years, she told The Observer. Hail damaged plants in 2010, tropical storm Irene and the Halloween snowstorm destroyed crops last year and the warm winter of 2012 resulted in an uncommon number of pests.

“As urban farmers it’s something we notice, working outside you can really see it,” she said. 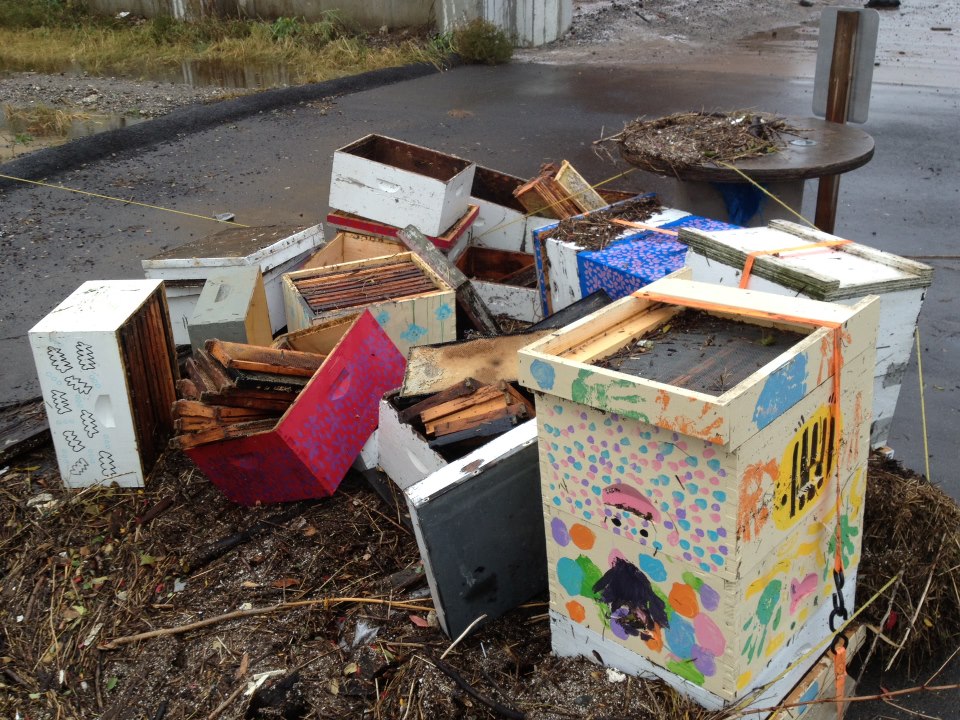