It was slipped into brief late-night remarks, so that you almost might’ve missed it: “The one thing that we had not counted on, New York University’s hospital backup power, in spite of them making sure, ensuring us that it’s been tested, has stopped working,” admitted Mayor Bloomberg. “And we’re working with them to help move people out.”

He sounded so calm, it was almost hard to tell whether the evacuation of a major Manhattan hospital might be a serious cause for alarm.

In any given hospital, the most critical patients are usually being kept stable thanks to electricity-dependent machines like ventilators. Those machines have got a bit of backup battery power, but not all that much. What usually happens when the power cuts off is that the lights flicker, everyone glances around nervously, and then the generators kick in and everything’s fine.

But if the generators don’t kick in, you’ve got a serious problem. The lights are out and medical personnel have to work quickly.

That’s roughly the situation the staff at NYU Tisch Hospital–which evacuated for Hurricane Irene, but decided to stay put for Sandy–found themselves in earlier this evening, judging from the dispatches from journalist David Shuster, reporting on the evacuation:

That basically means someone had to do the ventilator’s job by hand, using one of these bag valve masks you’ll likely recognize from medical dramas.

From CBS: lines of ambulances waiting to take patients away from NYU hospital. twitter.com/ditzkoff/statu…

According to CBS, there were something like 50 to 70 ambulances lining up to transport patients from 30th and First to other hospitals, reportedly including Mt. Sinai and Sloan-Kettering. NYU Medical Center dean Robert Grossman told CBS:

“We’ve had a number of power failures of primary and secondary backup systems.”

“[We’re] trying to evacuate our patients from the hospital. Our patients are our main concern right now.”

One thing’s for sure: We’d hate to be whatever poor bastard promised Mayor Bloomberg those backups would be working just fine. 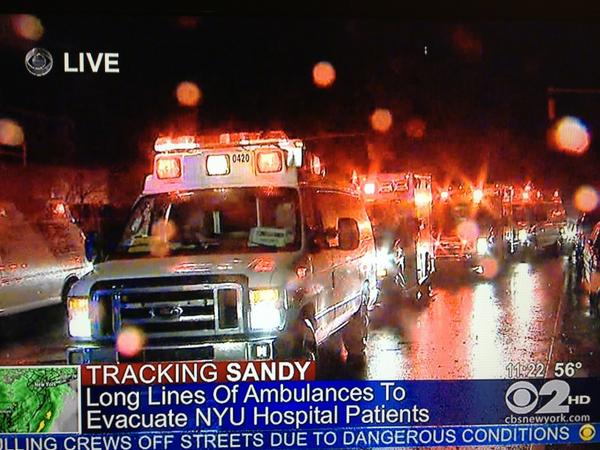