The closest thing we’ve gotten to reinstituting dueling was probably Norman Mailer’s 1969 New York mayoral campaign, where his animated call for jousting in Central Park to relieve modern flab formed one of the key pieces of his plank. Then the sitting vice president, Burr ran unsuccessfully for governor of New York, took a beating, and blamed former Secretary of Treasury Alexander Hamilton. We all know what happened next. The two men rowed across the East River to Weehawken and Burr cut down Hamilton in the most famous duel in American history.

Jefferson subsequently followed through with what he wanted to do anyway, and dumped Burr from his re-election ticket.

With apologies to Rodney, this is the last time New Jersey got a Frelinghuysen this close to the big Pennsylvania Avenue dance. Anti-Andrew Jackson Whig Henry Clay hung around presidential politics long enough to try to make amends for his 1832 loss to Jackson. Running against Democrat James K. Polk, Clay selected Frelinghuysen as his running mate in a play for northeastern support of his policy to deny Texas statehood. Already stymied in the South, on lockdown for Polk, the Clay-Frelinghuysen ticket lost a close election when Polk beat them in New York.

The Frelinghuysen-reinforced ticket did eke out a win over Polk in New Jersey: 50-49%.

Picture Steve Sweeney going straight from the Senate Presidency to the vice presidency of the United States. Today that has about as much chance of occurring as Joe Biden getting into a duel with Hank Paulson, mortally wounding him, and getting drop-kicked by Barack. But that was Hobart’s trajectory. His successful managing of John Griggs’s 1895 N.J. gubernatorial campaign coupled with his Republican National Committee credentials, corporate lawyer professional background and affable demeanor put Hobart in play.

But most important, Hobart hailed from a potential swing state, with a long history of Democratic Party dominance.

Remember (not that you should, really), the state that had put up General George McClellan to run against Abe Lincoln hadn’t voted for a Republican ticket in over twenty years.

1896 broke the chain, as the McKinley/Hobart ticket defeated Cross of Gold Democrat William Jennings Bryant nationally, and won New Jersey with a whopping 60% of the popular vote.

Up to the 11th hour, President Lyndon Johnson toyed politically with three potential vice presidential running mates: Senator Tom Dodd of Connecticut, future Clean Gene anti-war candidate Sen. Eugene McCarthy and Humphrey. He went with Humphrey – like McCarthy, a senator from Minnesota, whose north country presence helped balance Johnson’s attack. At the convention in New Jersey, Humphrey went into full-fledged battle mode, famously going after Republican presidential candidate Barry Goldwater. “Most Democrats and Republicans in the Senate — in fact four-fifths of the members of his own party — voted for the Civil Rights Act, but not Senator Goldwater,” Humphrey said.

After Kennedy’s 1960 victory in New Jersey, 1964 would be the last time a Democratic ticket would carry the Garden State until Bill Clinton’s 1992 campaign.

Bush wanted to keep New Jersey in the GOP win column after Ronald Reagan turned the trick twice in 1980 and 1984. Americans remember the Quayle-Bentsen debate for Bensten’s cutting “You’re no Jack Kennedy” line. But on the attack for his boss, Quayle made sure New Jersey voters knew Republicans were counting on them when he looked into the camera and decried Mike Dukakis’s environmental record. Quayle alleged that Dukakis’s solution to the cleanup of Boston Harbor was to dump sewage sludge off the New Jersey shore. “Michael Dukakis says he wants to do for America, what he’s done for Massachusetts,” the Bush campaign doubled down in a follow-up television ad. “New Jersey can’t afford to take that risk.” Bush carried on the Reagan tradition in New Jersey and beat Dukakis.

But who could forget Vice President Quayle’s other infamous New Jersey association, when, at a Trenton elementary school on June 15, 1992, he advised a student spelling bee contestant to plant an “e” on the end of “potato” after the kid had already correctly spelled the word.

The gaffe underscored a creaking shift in presidential politics, as six back-to-back elections won by the GOP proved that streak’s duration. The rise of Bill Clinton and  a coming five straight wins by Democratic Party presidential candidates starting in 1992 solidified New Jersey as a blue state.

Republicans had destroyed Dukakis four years earlier, and now they saw their perfect foil in Gore, the Tennessee senator/author of an environment tract called “Earth in the Balance. “Mr. Ozone,” the incumbent Republican president took to calling Gore on the campaign trail and on Oct. 22 with time running down and New Jersey a key battleground, the Democratic VP nominee appeared at the New Jersey laboratories of the Englehard Corporation. According to the New York Times, Gore attacked “comfortable and mistaken assumptions” that market factors alone would lead to improvements in the environment, and called for a new industrial revolution.

Interestingly, in his debate four years earlier with Lloyd Bentsen, Quayle had cited diminishment of the Earth’s ozone layer as one of his areas of environmental concern.

Riding an N.J. win streak going back to Nixon’s 1968 win over Humphrey, Bush would spend the eve of the election at a massive rally in Madison, emceed by right wing radio personality Rush Limbaugh, as the Clinton/Gore ticket prevailed.

“The campaign starts tonight, right?” shouted the Democratic governor. It would be a sign of bad things to come for the incumbent. The presence of Vice President Joe Biden at the Codey Arena in West Orange on June 5, 2009, was supposed to highlight the importance of Corzine’s re-election. But few people showed up, leaving the well in front of the august podium embarrassingly sparsely populated as Corzine roared to the rafters a message that subsequently went into a vacuum on Election Day.

Certainly, Biden’s other New Jersey appearance, in the closing days of the campaign at a Building Trades rally in Atlantic City, further showed the VP’s willingness to GOTV for Corzine.

But the lingering image out of the White House was Obama standing at a podium in the PNC Bank Center while Corzine haplessly held the president’s jacket – and lost the election to Chris Christie. 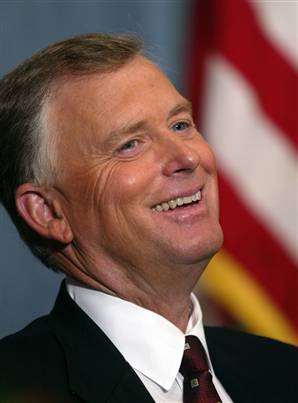