“I doubt there’ll be an offer anytime soon,” she added with a laugh, “unless people are really sick.”

The secret to her success, Ms. Gifford added, was discovering where her real talents lay. “I long ago realized half of finding out what you are is what you’re not,” she explained. “I was never going to be Barbra Streisand as a singer. I was never going to be Meryl Streep as an actress. But you learn to accept the fact that there’s only one you.”

However, this self-acceptance hasn’t caused Kathie Lee to stop challenging herself. Hence, her new credit as Broadway impresario.

Scandalous: The Life and Trials of Aimee Semple McPherson, which opens November 15, will test the breadth of Ms. Gifford’s appeal as well as her theatrical talents. The musical, for which Ms. Gifford wrote the book and lyrics (the music is by David Friedman, also a productivity guru and life coach, and David Pomeranz), tells the story of Los Angeles-based evangelical preacher McPherson. Quite possibly America’s first true media celebrity, she emerged at the dawn of radio to become one of the most prominent evangelists in the country. While the play is evolving day by day, the current draft uses as its framing device the perjury trial McPherson underwent near the end of her life, after her mysterious 1926 disappearance while swimming at Venice Beach. Presumed drowned, she eventually reappeared in Mexico, claiming to have been kidnapped. Detractors believed she’d been shacked up with a lover.

As Ms. Gifford pointed out, it’s a hell of a story.

“The biggest challenge of writing Aimee is, what do I leave out about her?” she said. “I have a huge piece of marble that was dumped on my front yard and I’ve been chiseling away for 12 years.” The play, previously called Saving Aimee, played in Seattle last year and is the end result of a lifelong obsession for Ms. Gifford, who said she has read 50 books on the subject. “Which story about her do you tell? Do you tell Aimee the evangelist? Do you tell the first superstar? The genius in marketing? The mother, the wife? Do you just do ‘Tabloid Aimee’?”

It’s as hard to know just what to do with Ms. Gifford. There’s the Kathie Lee who co-hosted the syndicated Live! alongside Regis Philbin from 1985 to 2000, and NBC’s Today with sometime Dateline journo Hoda Kotb from 2008 on—a ray of kooky, garrulous and sometimes self-involved light puncturing the earnest Donahue era. There’s the author and lyricist whose previous play, the 2005 children’s musical Under the Bridge, was crucified by the Times—the phrase “gag reflex” was trotted out—and who’s currently working on an adaptation of It’s a Wonderful Life. There’s “Tabloid Kathie Lee,” the harridan of TV talk accused of using child labor for her Walmart fashion line in the 1990s. And, perhaps most importantly, there’s the woman of faith, who first heard about Sister Aimee as a student at Oklahoma’s Charismatic Christian college Oral Roberts University and who hikes around Israel in her spare time.

We asked if she considered herself religious. “That’s what people assume,” she said. “I did go to Oral Roberts University, and I made some great friends there. But I left Oral Roberts. There’s a cookie-cutter mentality in many religions. I bristle against any organization that tries to make us alike. That religiosity thing—I rebel against it, I rebelled against it my entire life. And so did she,” Ms. Gifford said of McPherson. While the show is produced in part by the Foursquare Foundation, an arm of McPherson’s Foursquare Church, it is not a spiritual tract. In fact, when quoting scripture, the play sticks to the Old Testament rather than the New, because, Ms. Gifford said, “In the Judeo-Christian tradition, it’s something that we can all relate to. It doesn’t divide—it unites us.”

On Broadway, hundreds of gay chorus boys, as well as the happy blasphemers of The Book of Mormon and Ms. Gifford’s own lead actress, avowed athiest Carolee Carmello, might differ. But no matter. Ms. Gifford has faith, referring us to a favorite verse: Jeremiah 29:11, in which God sent his prophet a message of hope. “I know the plans I have for you. Plans to prosper. To give you a future and a hope,” she said, paraphrasing.

The show’s inspirations don’t end with the Torah. A key line of dialogue, “If you have a pulse, you have a purpose,” came from Paul Newman, “one of my favorite people ever in the world,” she said. At a fund-raiser for the Westport Playhouse, Ms. Gifford said, Newman greeted her by getting down on one knee and kissing her hand. He told her, “I have a pulse. That’s a good thing.”

She pondered the meaning of this on her way back home to Greenwich—the charitable nature of a Hollywood legend who could have skipped the evening altogether, the belief that there’s always time to make an impact. “I tried to explain to Frank, who was not happy he kissed my hand,” she said. “I told him to be happy that’s all he kissed!”

There she goes again. Ms. Gifford has long been a rebel not just in her theology but in the tightly structured world of TV talk. On Live!, Ms. Gifford and Mr. Philbin would chat at length about themselves for the opening segment, with her contributions largely focused on her children and home life. “Is there anything they won’t say?” asked a 1991 People cover. (A little benign gossip about sportscaster hubby Frank Gifford seems pretty edgy when you’re up against morning infomercials and local news.)

Ms. Gifford sees Live! as somewhat revolutionary—after all, without her kibitzing, would we have ever had Rosie O’Donnell’s pleasantries about the Broadway show she saw last night or the mommy chat on The View? “It was the first time ever on TV—ever—aside from Lucy, that people went through a pregnancy with a woman on television that was real,” she said. “And Regis and I were the first people that I know of where we talked about our lives. We didn’t have a commercial for the first 23 minutes. That had never been done before! And it changed daytime television forever.” 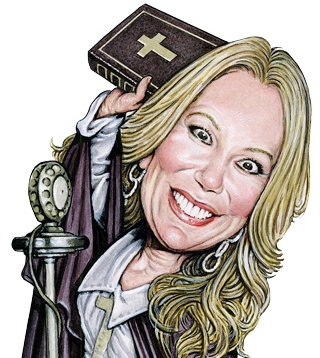