October’s Queens Tech Meetup began with a statistic. Coalition for Queens founder Jukay Hsu announced that, since the inaugural June meeting, the group has grown to more than 800 members. While it didn’t look like everyone had turned out on Wednesday night, Long Island City’s See Exhibition Space was packed, with the chairs almost full and a fringe of folks standing in the back.

IRL, the pair are kind of an odd couple. The towering Dean Huttenlocher, clad in professorial business casual (read: a roomy, tucked-in button-down) took the mic like a natural and began holding forth. Mr. Pass stood back, arms crossed in the untucked startup uniform.

“Definitely have to shorten that bio,” admitted Dean Huttenlocher as he took the mic, before launching into his spiel: “The Bloomberg administration, I think set the tone here for trying to push tech forward in New York City in all kinds of ways,” he said.

“With the applied sciences initiative, at Cornell we have this amazing opportunity to back up and say, ‘What should a graduate education and research campus for the twenty-first century look like?'”

For one thing, R&D (in consumer tech, anyway) doesn’t quite always adhere to the pipeline model any more. The timeline has shortened, and for another, development isn’t necessarily sequential anymore. Often, Mr. Huttenlocher added, “the development of new products drives new research ideas.”

Next up was entrepreneurial officer Mr. Pass, who elaborated a little about how the school focuses on life after graduation and the commercial realm.

The school’s curriculum, he said, will look a little more like a business school, with the early part of the week taken up with classes and the latter half devoted to “an explicit focus on entrepreneurial life and learning about what it takes to achieve real-world impact.” (This, one imagines, is where the mentors will come in.) In fact, as Dean Huttenlocher later added, one of the degree programs eventually offered will be “a version of the MBA,” which he described as a twelve-month accelerated program with the prerequisite that one have an advanced degree in a science or technology field.

Perhaps thanks to the rather intimate setting–the See Exhibition Space doesn’t hold the hundreds that the Skirball does–the questioners didn’t shy away from aggressive questions.

One asked how the school planned to keep companies in the New York area (a fair question, considering the city’s investment). According to Mr. Huttenlocher, it won’t be anything formal but more of a community-building matter. “The main ways that we’re looking at keeping graduates in New York is tying them to New York–and I don’t mean physically tying them,” he quickly clarified. “Great people with great expertise are going to go where they feel they can have the most impact,” and by involving mentors from the local tech community, they’ll weave students into that community. Then they’ll stay, where their connections are.

Another inquisitor wanted to know which of the “two different kinds of people” in the tech industry the CornellNYC campus would focus on serving. “You have the social people, and you have the tech people, and it’s a rather deep dichotomy that does exist,” he explained. Mr. Pass, however, disagreed with the fundamental premise of the question: “I’ll agree that maybe tech people stereotypically have certain personalities that are less social, but what you’re describing is a bad culture. Not all tech companies are that way.” Hence, CornellNYC is going to focus on building the kind of culture where there’s no such rift.

The questioner wasn’t satisfied. “But is the focus of the campus going to be to bring those people [meaning the uber coders, the technically rather than socially skilled] out of their shells, or will it be to get people who are already somewhat social and give them a deeper knowledge of the tech industry?”

Mr. Pass took another pass, settling the matter by saying there’s “certainly a culture fit” they’re looking for–i.e., they’ll select for individuals with at least a willingness to be collaborative.

Mr. Hsu, the meetup’s organizer, asked about that touchiest of subjects, software patents–a timely query considering the announcement earlier this month that the Department of Commerce took the unprecedented step of placing one of its patent officers directly on the Cornell-Technion campus. “Our plan on the tech campus is not to shy away from controversy,” Mr. Huttenlocher admitted with a laugh, adding “and certainly, with software patents, we’ve stepped right into the middle of a gigantic boxing ring.” The presence of a patent officer has two roles, he explained: One is as a resource for not only the school but also the five boroughs, as well.

The second part is “really opening up a high-level dialogue between the faculty and staff and students of the tech campus, companies in New York, and the patent office, around issues of software patents and some of these controversial topics.”

After the Q&A came the demos. It was an abbreviated schedule, with just three companies on the docket. First up was Paid Content founder (and Long Island City resident) Rafat Ali, introducing Skift, a content startup aimed at the travel business. Following him were Hubbl, an app for app discovery (yes, it’s named after the telescope–not very startup can be Space X, okay?) and for the finale was See.Me, a creatives’ platform formerly known as Artists Wanted and, incidentally, the organization behind the exhibition space where we were sitting that very minute.

Then, after just a couple more beers, everyone dispersed into the Long Island City night. 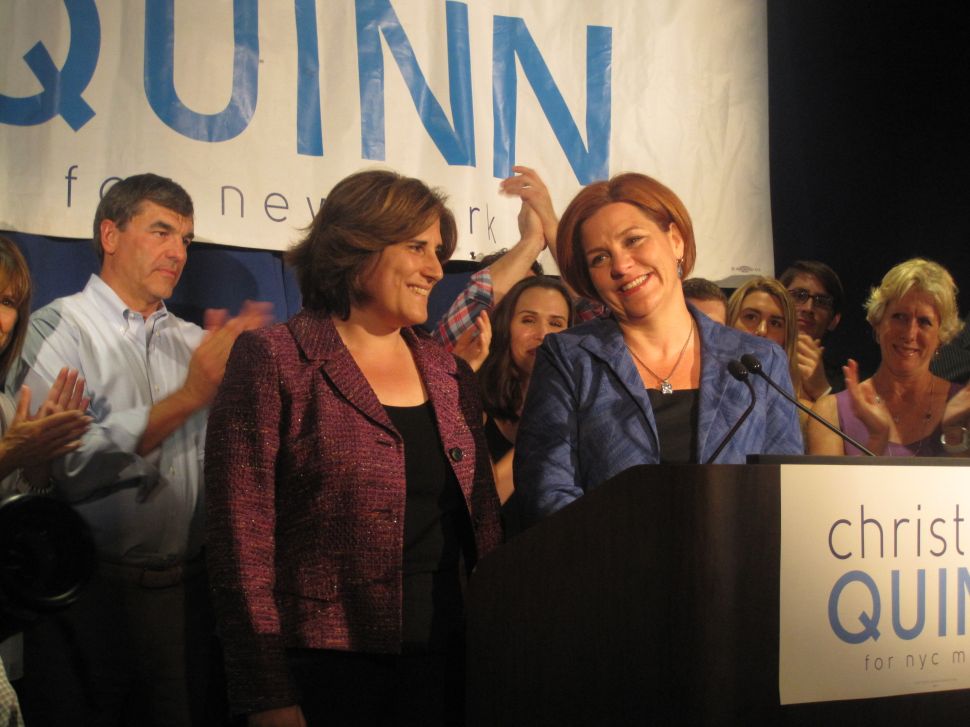