Quora is the site where headsdown homebodies ask other sheltered types questions like, “What are some things I’d be shocked to learn about the outside world?” But now that Quora is over three years old, it seems as if they’re finally going into the real heavy stuff.

A question posed under the topic “Murder,” asked, “What does it feel like to murder someone?” Some inmates from San Quentin State Prison opened themselves up, providing deeply personal answers that offered up something rare on Quora: a glimpse of life far, far away from the tech bubble.

Tommy Winfrey, an San Quentin inmate currently serving a sentence of 25 years to life for second degree murder with gun enhancement described his feelings about his crime:

Without a doubt this is probably the most personal question I think I could ever answer. This is a question I have been asking myself for a very long time now, and just coming to grips with the answers I have found. To say my answer is complex, and that I am going to have difficulties expressing exactly how I have felt, and still feel about murdering someone is an understatement.

I guess the beginning would be the best place to start. When I took another man’s life I was just nineteen years old. Looking back now, I can honestly say I felt immense peer pressure to go through with the murder. I felt like I would be seen as a weak punk if I let another man get over on me. I was a drug dealer, and I felt I had a reputation to uphold. I can see all this now, but at the time I could see none of this. I realize now I was in a very bad place in life back then. I was in the midst of a serious drug addiction. I felt worthless and unworthy of love, so in return I placed little value on my life or on the life of anyone else. All of these feelings combined, made feel so powerless in life, I lashed out….

Of course, inmates are not allowed to use the Internet. But a select few of the prisoners at San Quentin are enrolled in a program called The Last Mile, which trains them with the goal of eventual placement in a paid internship somewhere in Silicon Valley, and as part of the program, they’ve been answering questions on the Q&A site. (Earlier this year, Betabeat introduced you to Phil, one of the most popular prisoners on Quora.) The’ve gathered somewhat of a following–VC darling, former Digger, and the current CEO of rewards site Kiip, Brian Wong visited with the group last December (picture is above).

We look forward to Quora finding the right experts to explore other terrifying and fascinating questions that keep us up at night. Looks like they’ve already tackled “what it feels like to die.” 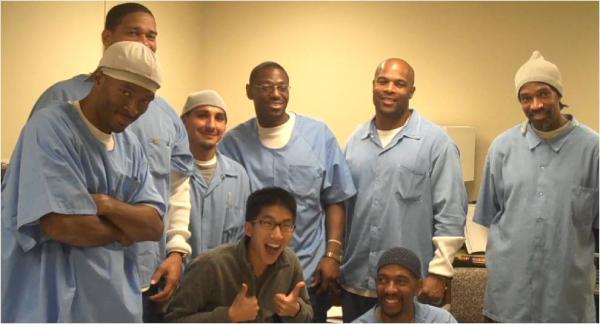