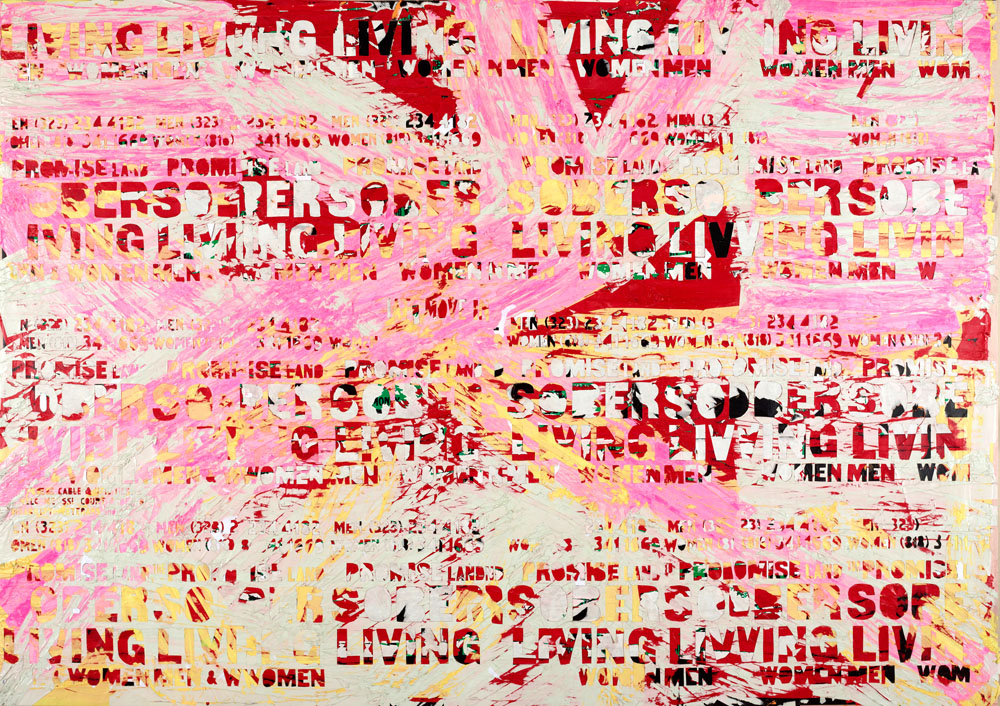 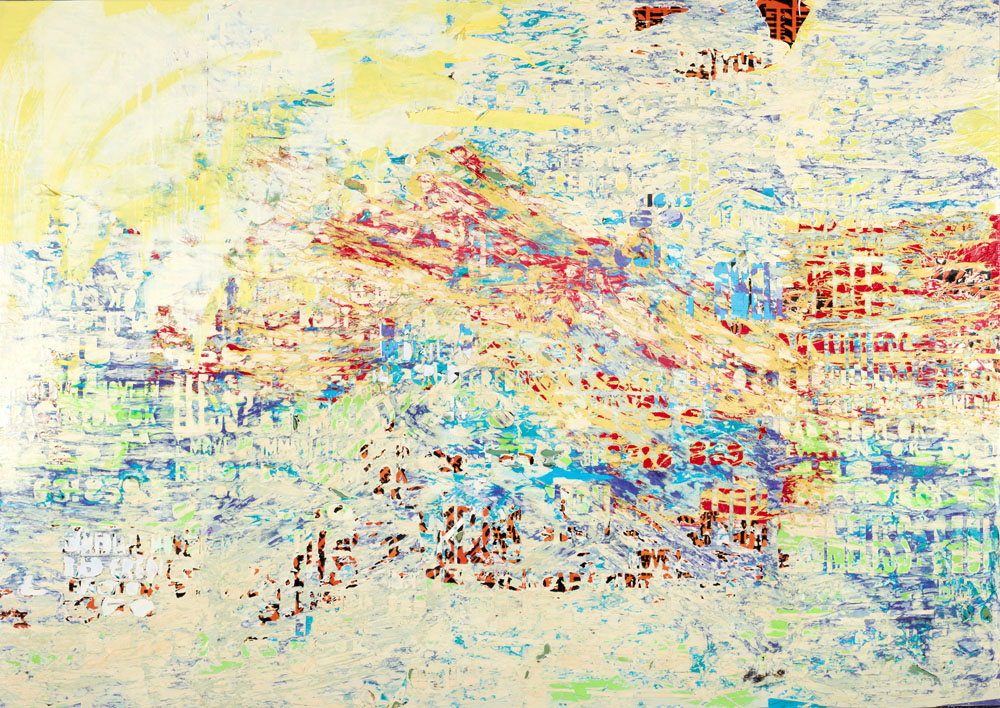 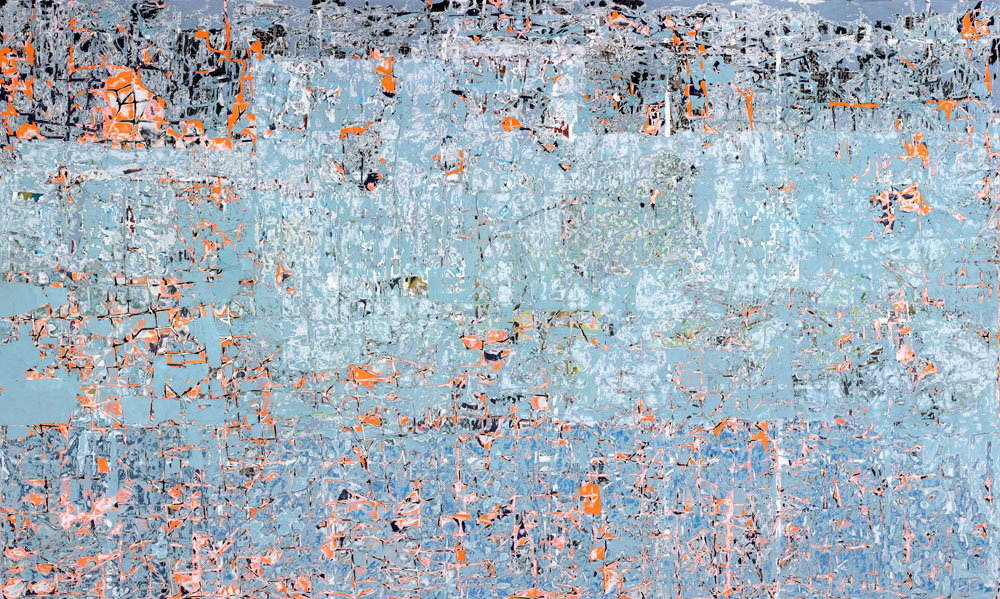 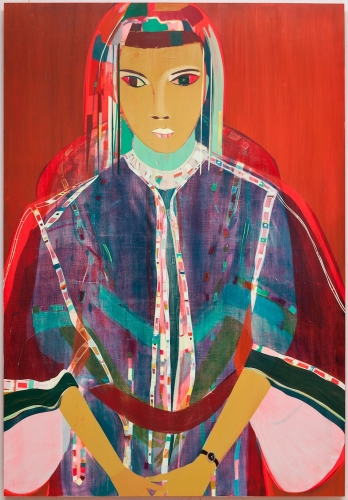 Oil and acrylic on panel, 96 × 66 inches
Courtesy the artist and Salon 94
Advertisement 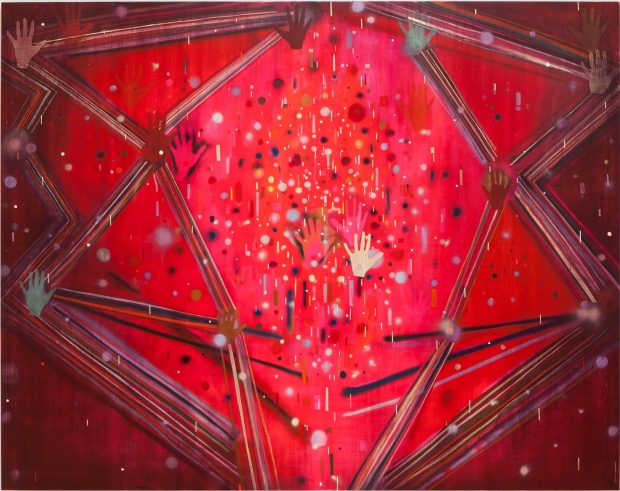 Oil, acrylic and spray paint on panel 96 × 120 inches
Courtesy the artist and Salon 94 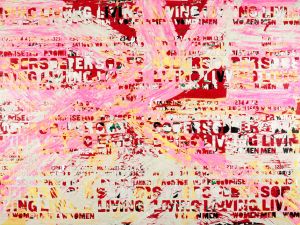 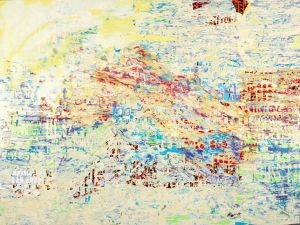 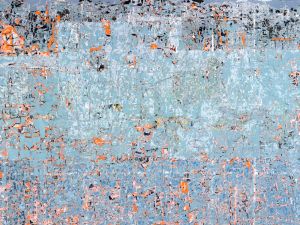 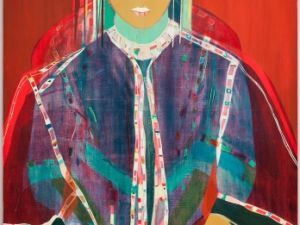 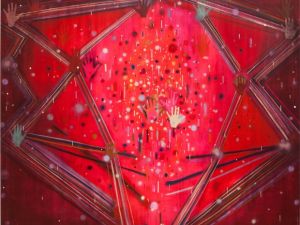 The two best painting shows in New York right now, the superb “Picasso Black and White” at the Guggenheim and the convert-making “Wade Guyton OS” at the Whitney are exemplary of distinct conceptions of painting—there’s the inexhaustibly inventive, emotionally charged Modernist, all eros and thanatos, and, a bit further downtown, appropriately, the cool, cunning techno-formalist, launching surprise attacks on painting’s past.

But both shows are distinctly grayscale affairs, and as such are likely to put you in a mood for color. Luckily, sprawling canvases by two ace mid-career colorists, Jules de Balincourt and Mark Bradford, appeared in galleries this past weekend, just before Hurricane Sandy made landfall.

Mr. de Balincourt first appeared on art’s radar about a decade ago when he was a graduate student at Hunter. He won attention for his figurative paintings, but swiftly proved that he can do it all—text pieces, geometric abstractions—in a consistent style evocative of 1970s illustrations (he adores earthy tones: umber, ocher, burnt sienna). But he’s at his best with slyly humorous genre scenes. He aspires, it seems, to be a modern-day Bruegel of listless American types—hippies, biker gangs and yuppies, gathered around a campfire, cruising a highway or hobnobbing on the penthouse deck of a luxury condo.

For his show at Salon 94 Bowery, his first solo outing in New York since a 2010 turn at Deitch Projects just before its namesake set sail for L.A. MOCA, Mr. de Balincourt offers up nine paintings, most large and concerned loosely with the connections and gaps between people. The most populated painting is of a large park filled with scores of figures holding up placards, each bearing a different portrait. It looks as though a number of niche political rallies have accidentally converged. Though they share the park, the figures are absorbed in their own worlds; some have abandoned their signs and wandered off. It’s an apt depiction of today’s polity, but like its title, Idol Hands (all works 2012), it feels facile, lacking the mystery and bite of his earlier paintings.

There are two lifeless, seemingly critique-free scenes involving boats out on the open (more people alone together), one with fireworks streaking overheard, and two brightly colored abstract paintings with lines and small patches of color. In one of these abstractions, Ecstatic Contact (2012), those lines flow over a hot pink, polka-dotted field of color, connecting a number of handprints. It’s cute and disturbingly wan: a New Age bo-bo from one of Mr. de Balincourt’s better paintings could have made it. Mr. de Balincourt does better in two haunting portraits. In Off Base, which stretches a full 10 feet across, a large group of spectral, camouflaged soldiers in myriad shades of green seem to float atop one another, as if each man is drifting apart. In a slightly smaller portrait of a young, almond-eyed woman wearing a sphinxlike expression, he channels Modigliani by way of Matisse. It is a stunner.

A recurring motif in Mr. de Balincourt’s work is the map—he’s painted purposely naive-looking images of the United States, China, California—and his invocation of it here is telling. This time he presents a purely theoretical place: Pangaea, the landmass that geologists believe existed in the Paleozoic era. That supercontinent, which will slowly break apart, is filled with faces and, oddly, surrounded by modern boats. Spanning some 250 million years, it shows him again eschewing deadpan commentary in search of some grander, more timeless statement. The result may not be altogether convincing, but he deserves credit for gamely deviating from his successful formula, for embracing his restlessness. This may prove to be a transitional moment. Here’s hoping.

Mark Bradford also has an affinity for maps, though viewers would be hard-pressed to identify any exact locales in the gigantic, virtuosic paintings that he makes by painstakingly collaging and rubbing down various elements, especially cheap posters. He sometimes models forms from actual maps, but even when he doesn’t, his pieces are often comparable to aerial views of cities, thanks to their rhythmic array of geometric shapes—rows of rectangles, like city blocks or streets—and thick, meaty lines that are suggestive of transportation networks.

To make these pieces, Mr. Bradford pastes layers and layers of posters and other paper on top of one another, periodically grinding them down or slicing in shapes or bits of text he finds from signs near his Los Angeles studio. Monumental abstract paintings forged through hard labor, they radiate color from the slivers and patches he leaves around his hard-won erasures. Rather than sending the eye dancing (as in, say, a Pollock) or into a field of pure color (Yves Klein or Ad Reinhardt), they invite it to get closer, and dare to read through the tightly pressed cacophony of materials.

Once you’re up close, things can take an unsettling turn. In Her Mouth Across the Table (all works 2012), overlaid splashes of Kool-Aid–like colors contain discernible phrases: “eviction,” “bad credit,” “homeless.” The psychedelic Promise Land—a tie-dye-style confection of pink, yellow and red—has words like “sober” and “living,” as well as a phone number that, for the record, rings endlessly when called.

In some pieces, like Father, You Have Murdered Me, Mr. Bradford overloads his canvas. Other painters do this and it looks tedious, but the patterned cutting and meandering lines that Mr. Bradford creates make his compositions cohere—as though they are small slices of some vast artwork.

With their humble materials and fragments of language, Mr. Bradford’s abstractions harbor traces of the real world, problems that are papered over or rubbed out of existence. Even when there’s not a single word visible on these gigantic paintings, you know they are there, just out of sight.