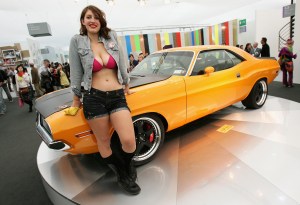 A work by Richard Prince at the 2007 Frieze Art Fair. (Chris Jackson/Getty Images)

Here’s some disheartening news to consider this afternoon: 67 percent of galleries at London’s recent Frieze Art Fair have rosters with less than one third women, according to the East London Fawcett Group, a U.K. gender-equality organization. It published its results in a report called the ELF Great East London Art Audit, which was inspired by a similar study that the feminist art group the Guerrilla Girls conducted in 1985 on a show at the Museum of Modern Art. They also determined that only a minuscule 1.5 percent of galleries at the fair show more women than men. This comes to us via Huffington Post with an assist from Blouin Artinfo.

Huffington Post quotes Jude Kelly, the artistic director of London’s Southbank arts center on the topic: “If culture is the expression of who we are, and if women’s stories are tiny on that landscape, you’re continuing the idea that women don’t really play a role in the world. And that’s bad for everybody.”

On a slightly more positive note, the percentage of London galleries doing solo shows with women artists during Frieze time rose 11.8 in 2008 to 23.3 this time around.

As we noted last year, prices for women artists still lag far behind men’s at auction.