Whoa, Detective Munch needs to take some time off the force: Law & Order actor Richard Belzer recently proved that he is the definitive guy in blue (at least language-wise) when he appeared on Good Day NY, ostensibly to promote his latest book, Dead Wrong: Straight Facts On The Country’s Most Controversial Cover-Ups. The Fox 5 morning anchors got more than they bargained for when the former stand-up comedian (he used to warm up the audiences on SNL!) started talking about sodomy and having co-host David Price “banged in the ass.”

Then he gave the Nazi salute and told the horrified hosts to “Say HEIL to all your colleagues at the other division.”

Of course, the best part was his publicist’s explanation.

http://youtu.be/giFFALUlPTo
In attempting to explain the whole Hitler thing, his publicist told TMZ that it was a “satirical gesture toward Fox News…whose ideology he is opposed to.”

Yeah, no shit. This just makes us feel bad for the poor Good Day NY hosts, whose producers probably should have vetted Mr. Belzer–who frequently appears on Bill Maher and Howard Stern’s programs–more thoroughly before letting him on a morning program. 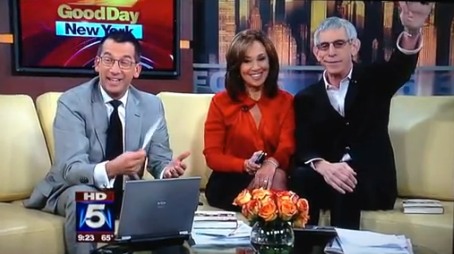