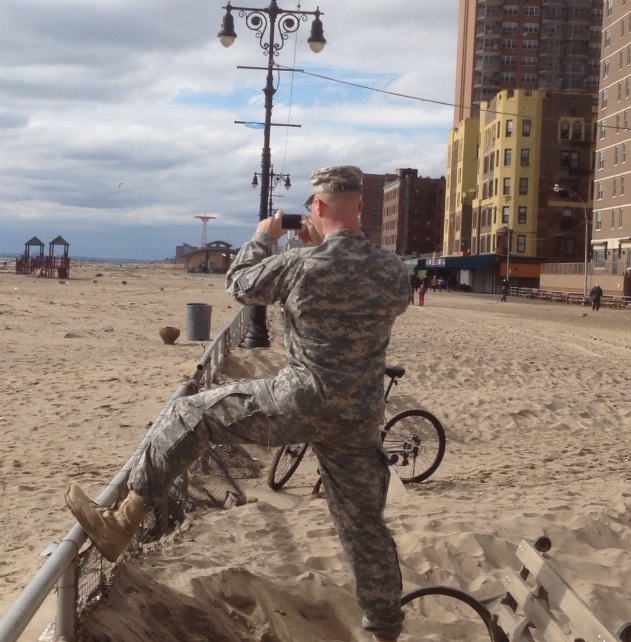 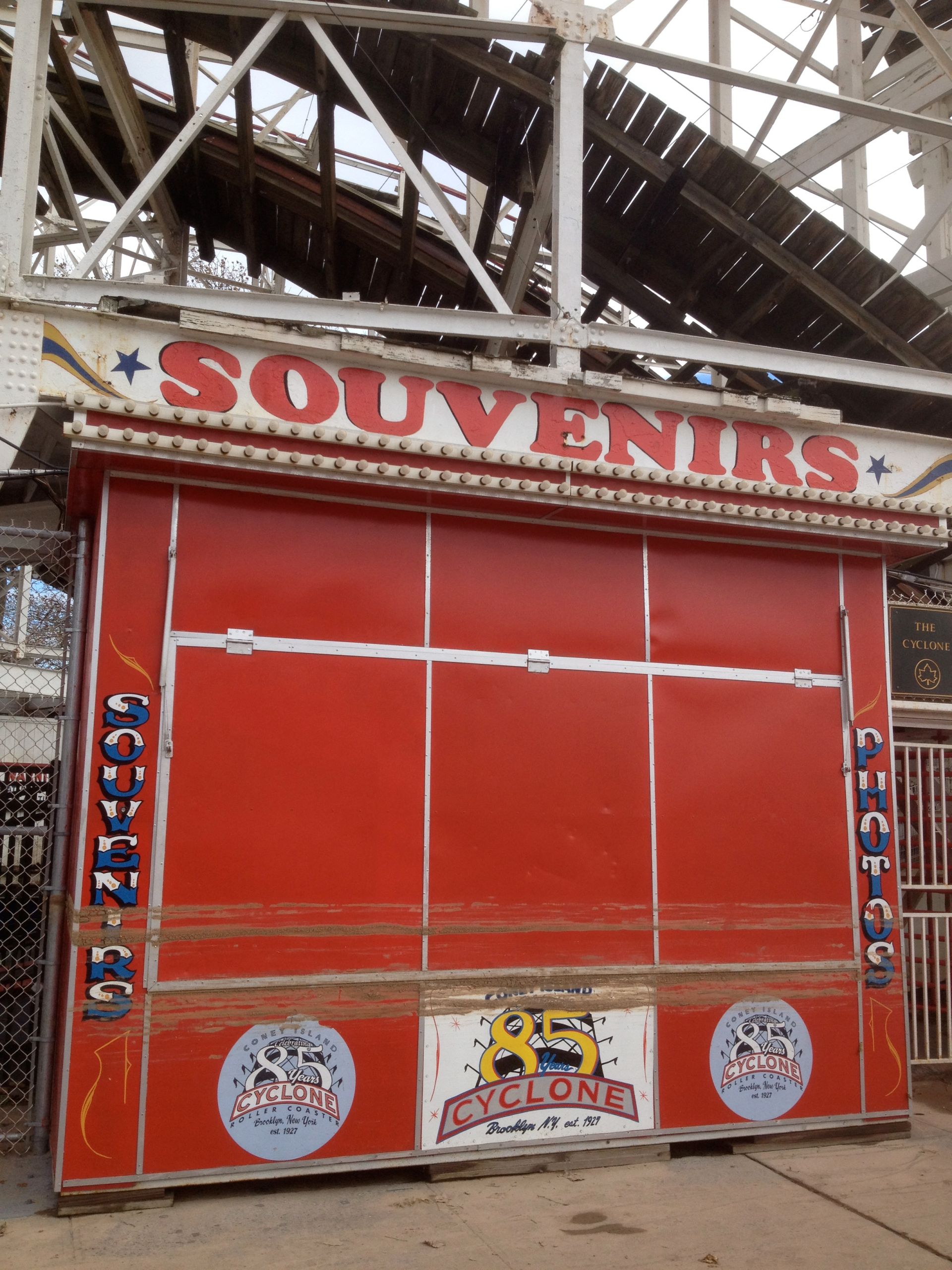 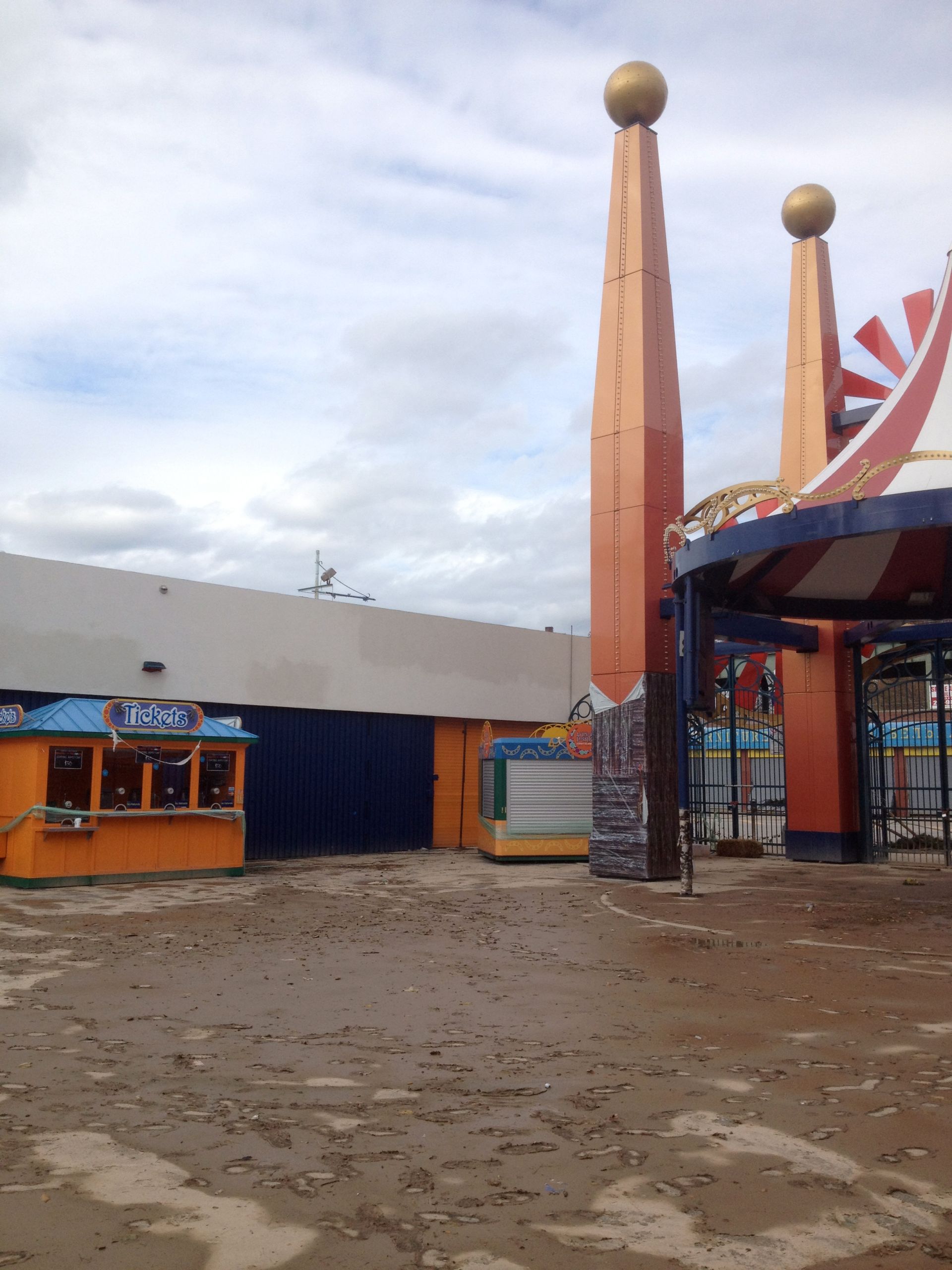 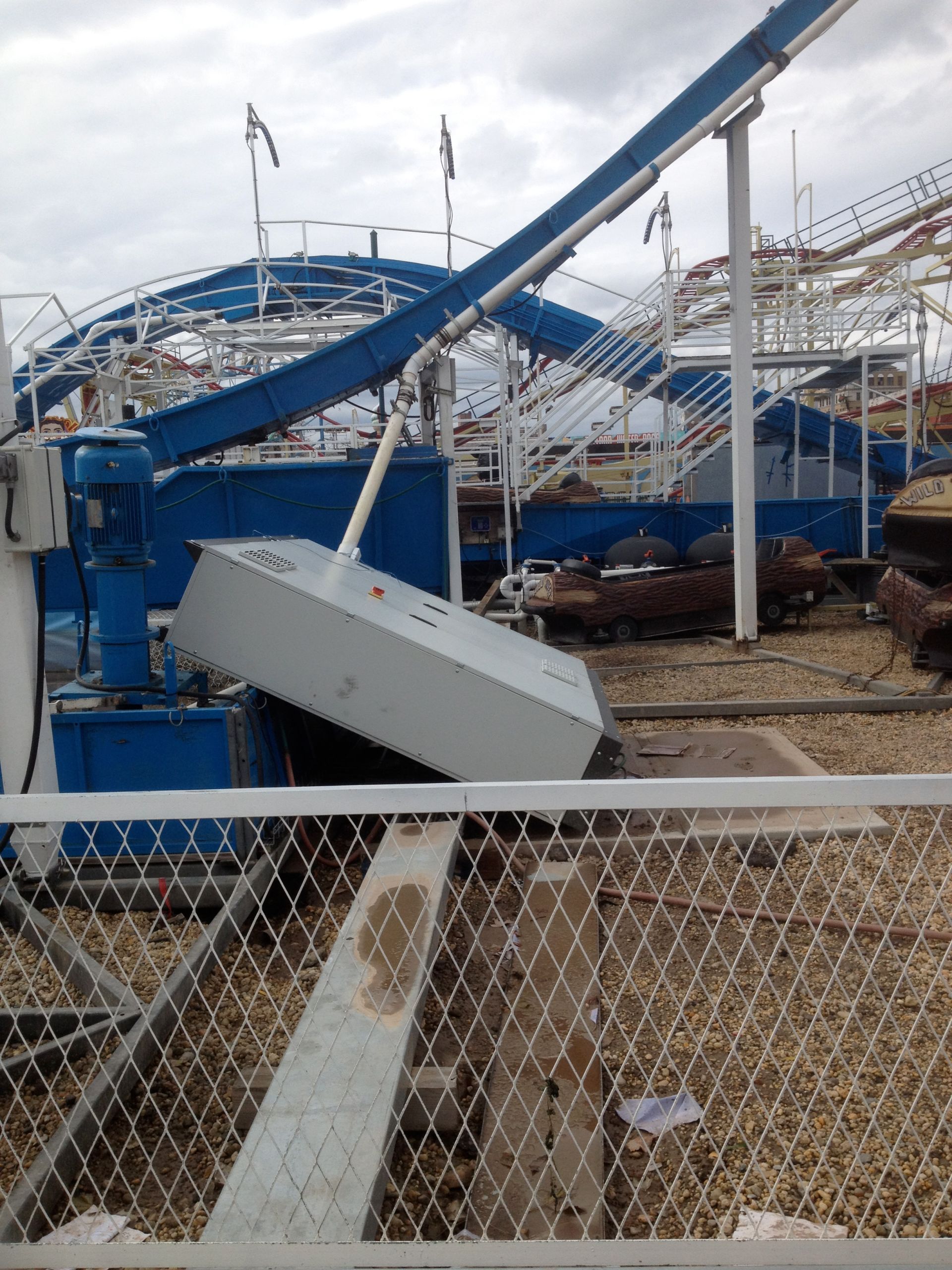 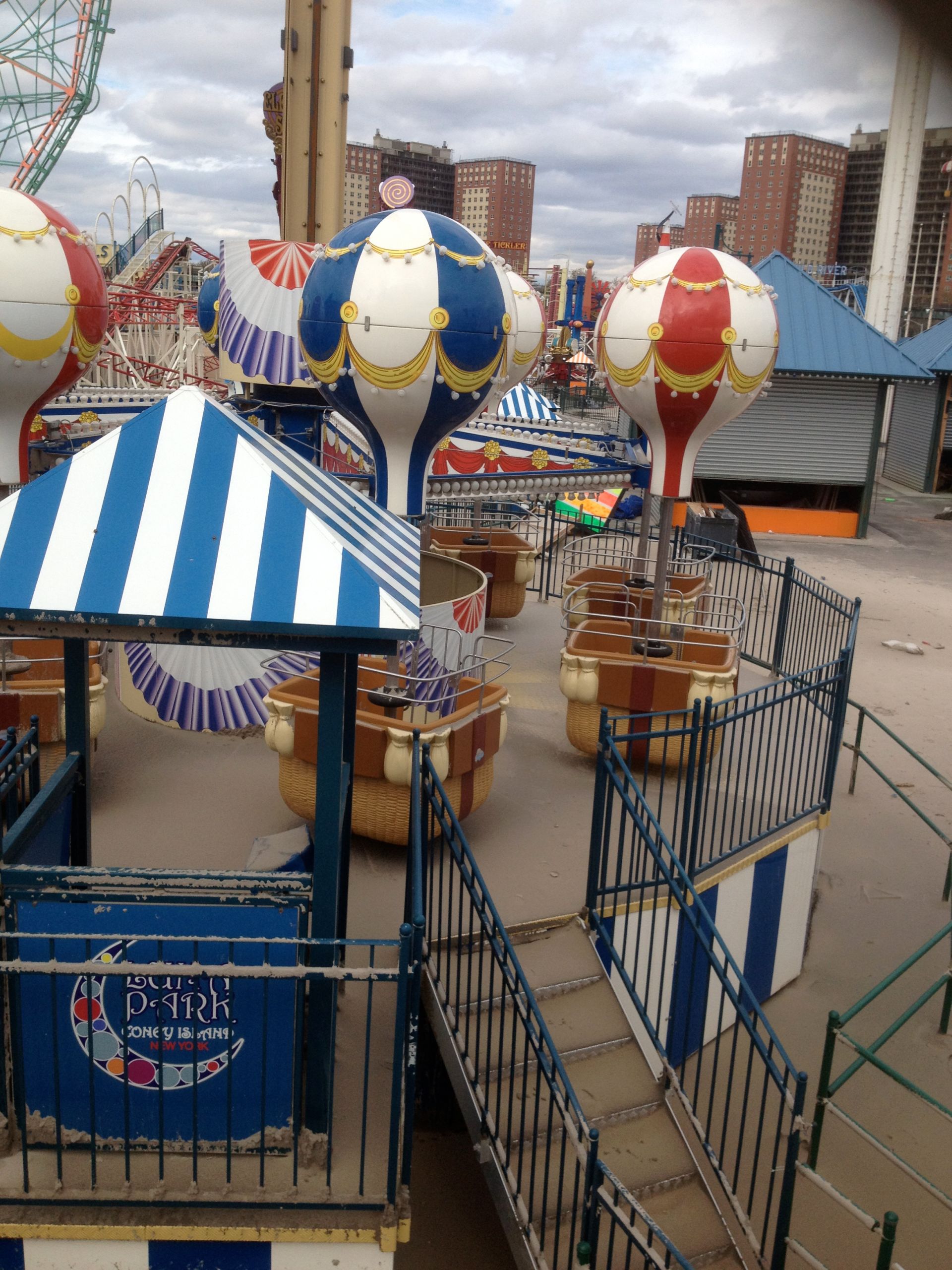 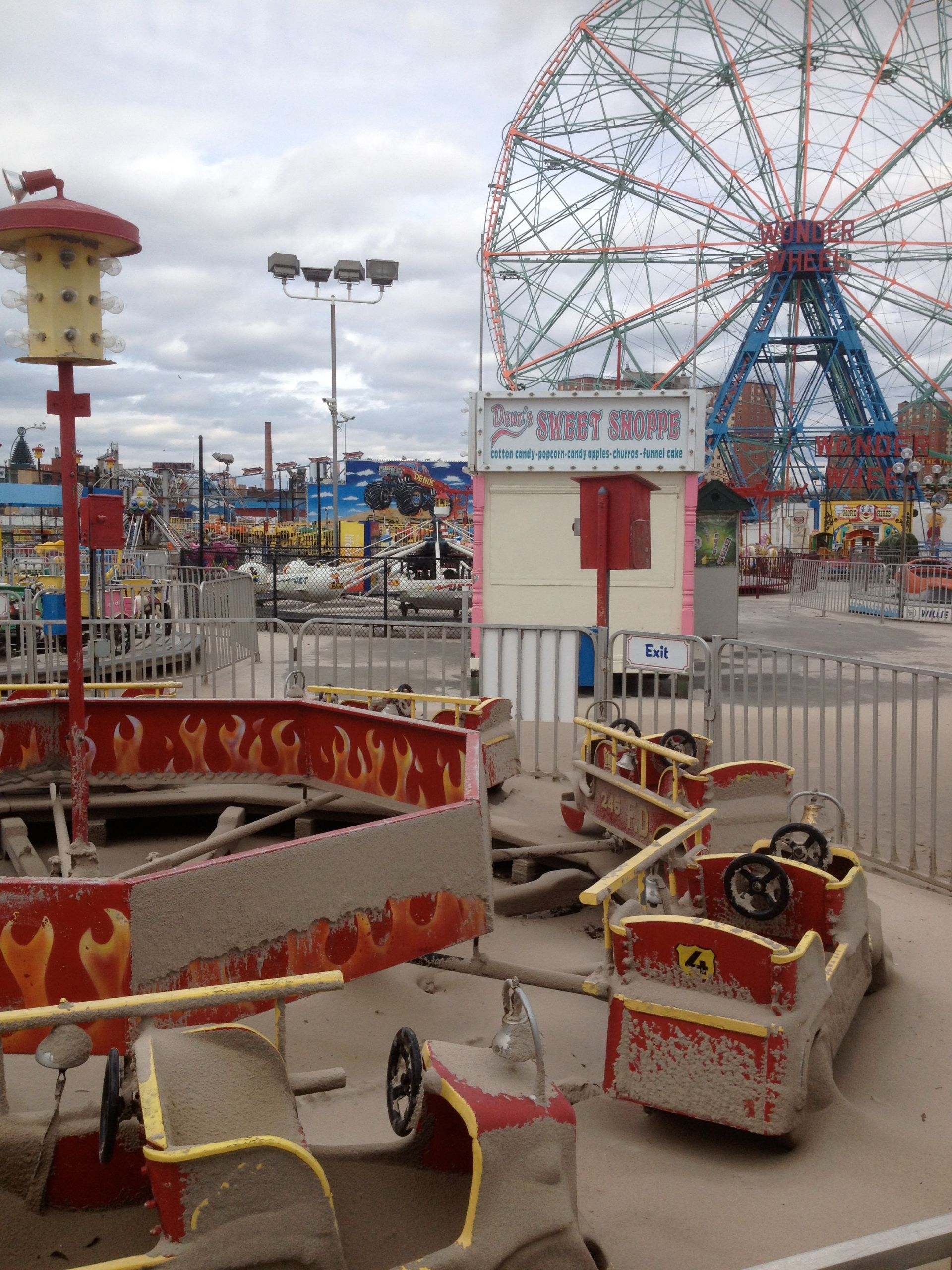 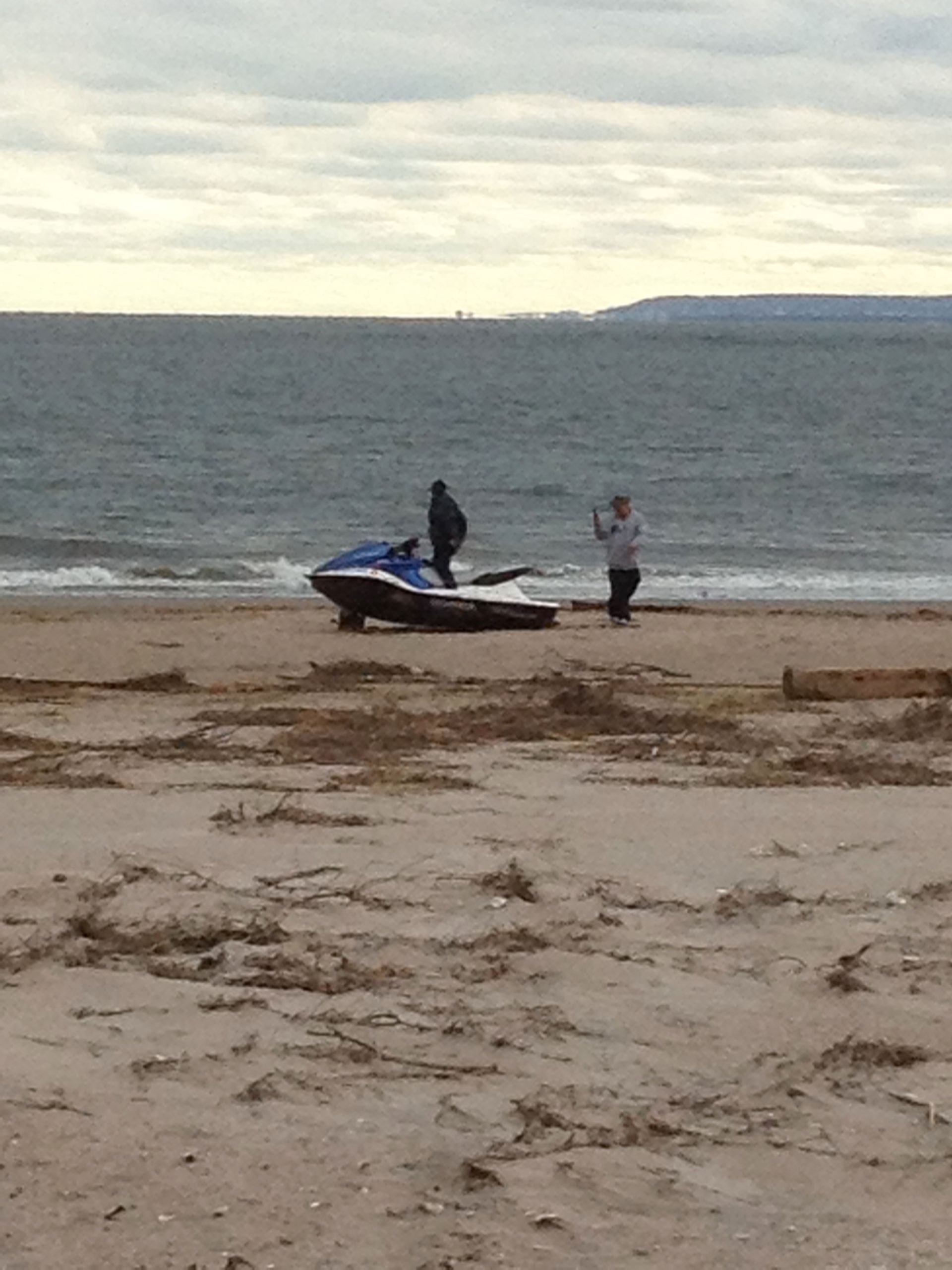 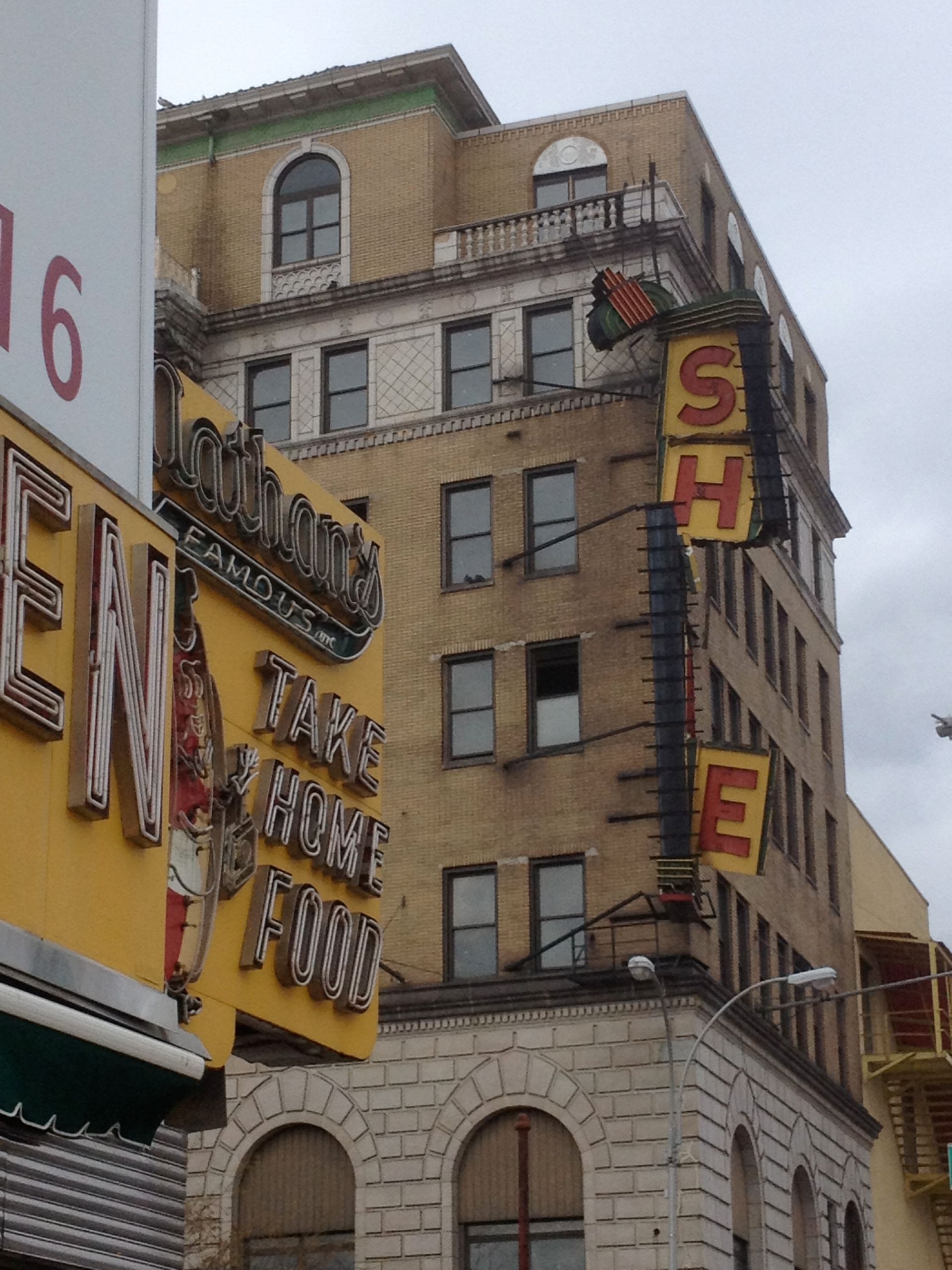 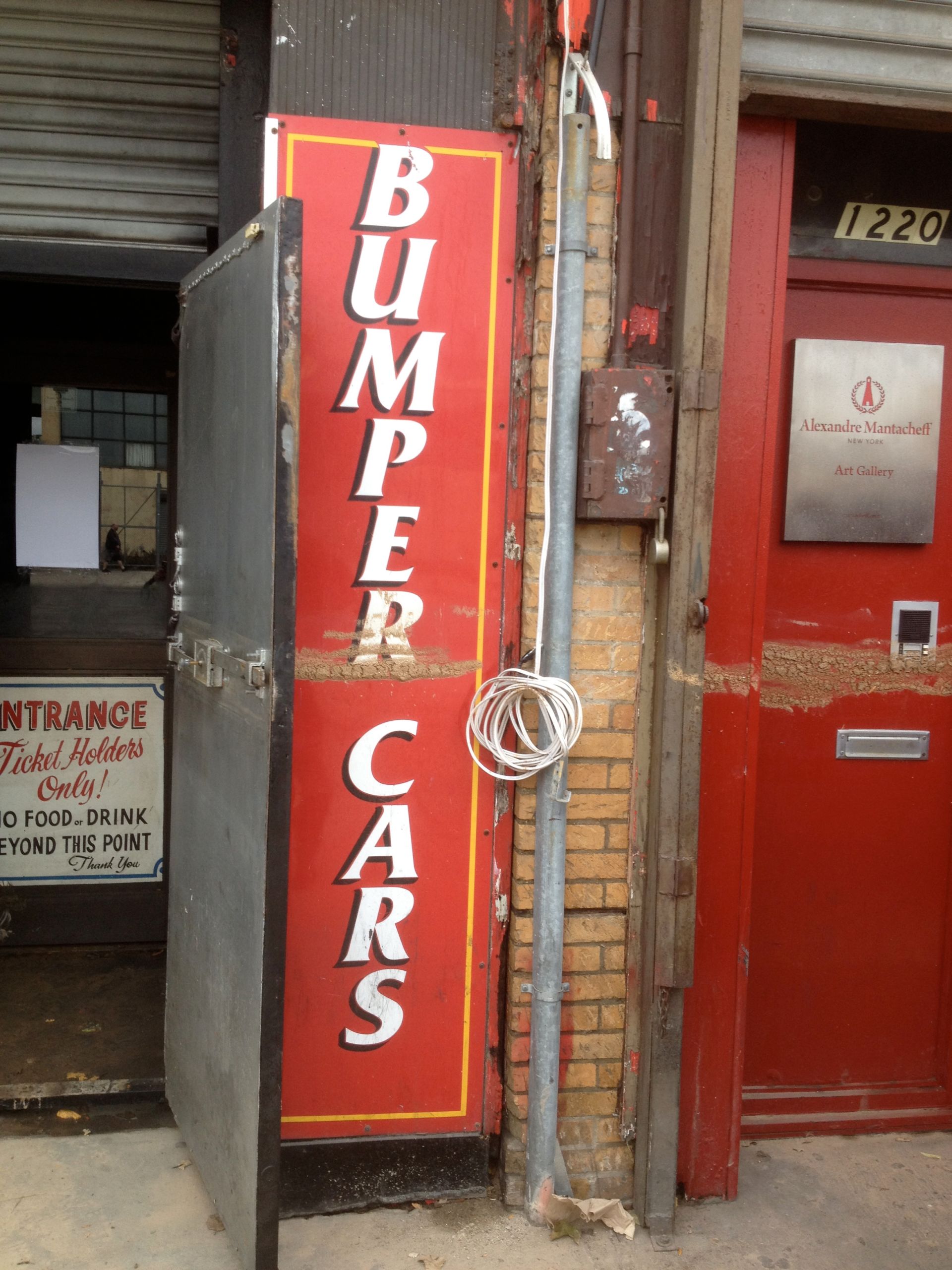 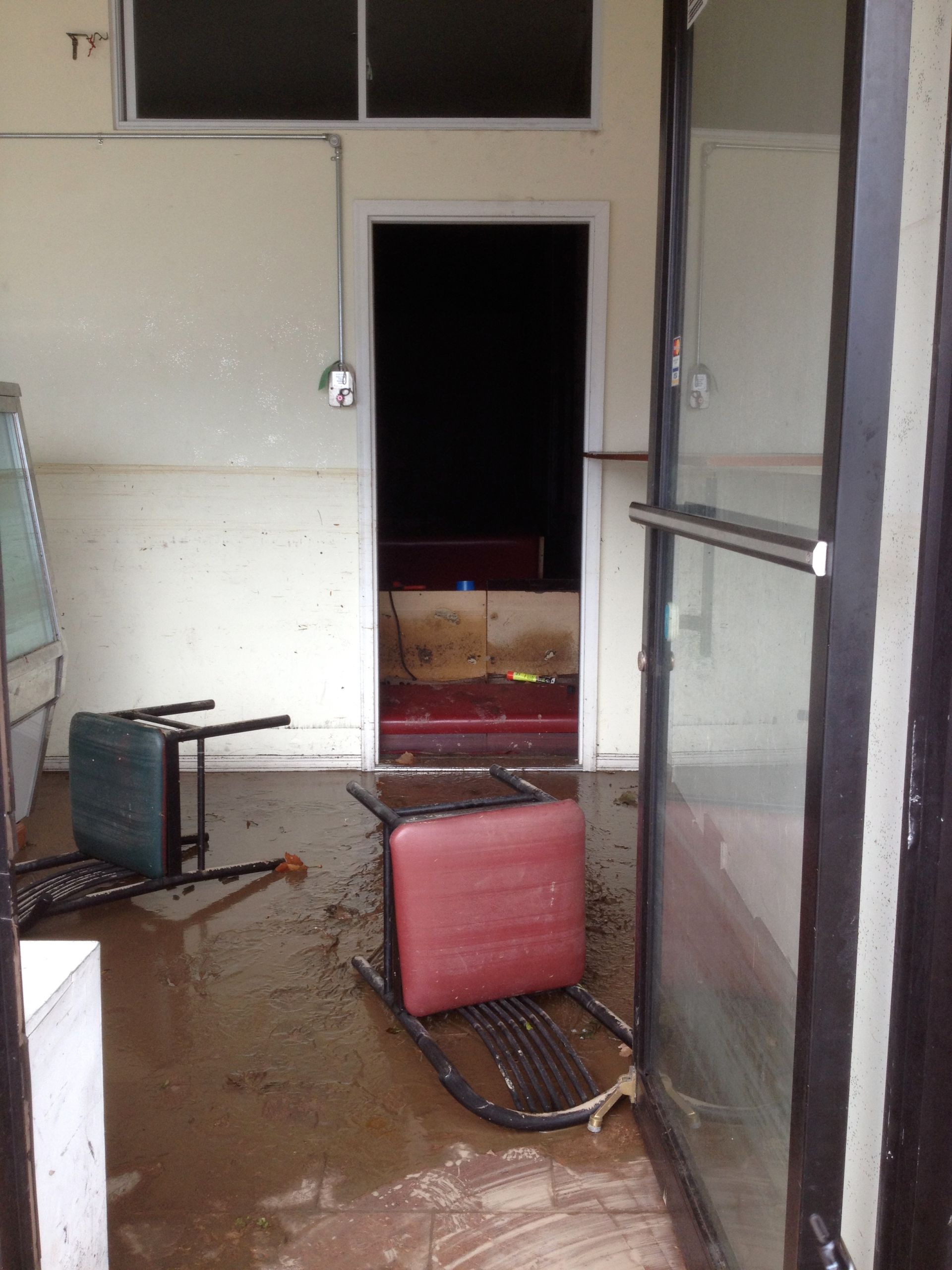 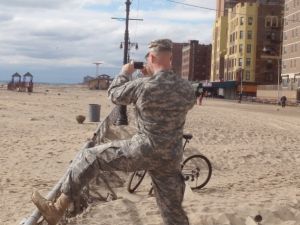 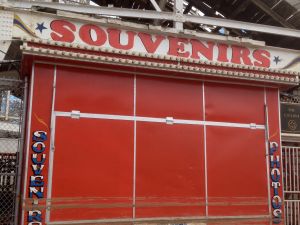 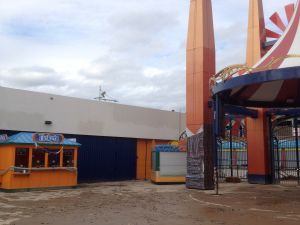 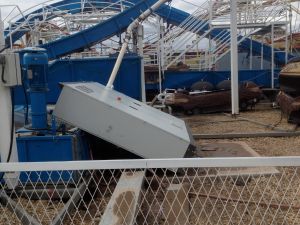 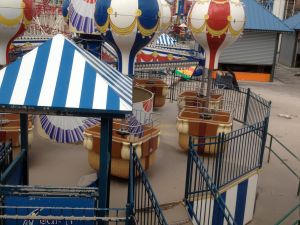 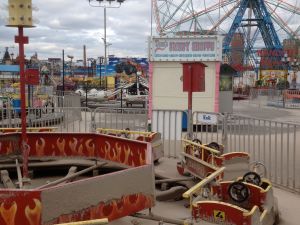 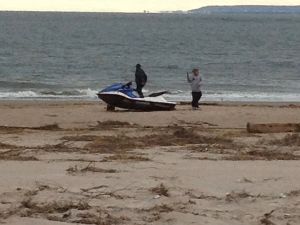 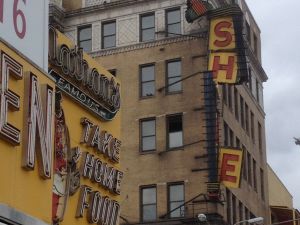 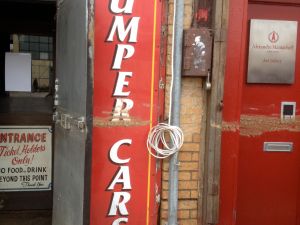 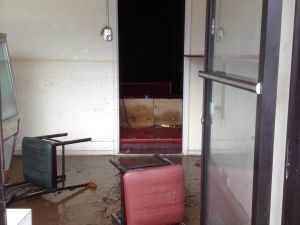 Coney Island, including its iconic amusement park and boardwalk, was hit incredibly hard by Hurricane Sandy along with the rest of Brooklyn’s southern coast. Politicker ventured into the area today, a journey that took us on sand-covered streets without working traffic lights, and saw broken rides and damage on Surf Avenue, which was flooded with waterthat reached a depth of at least four feet.

At the New York Aquarium, which is located under the boardwalk, staff said they were too busy dealing with the after-effects of the hurricane to speak with us. Alongside one of the aquarium buildings, we noticed being drained into the street.

The parking lot of the aquarium was covered in sand that spread through the area with the floodwaters. In the amusement park we witnessed several rides damaged by sand and winds.

Above, on the boardwalk, local business people were cleaning up their shops, restaurants and bars. Lola Star, who owns a souvenir boutique on the boardwalk and another shop below on Surf Avenue said she hadn’t seen anything like this storm in her 12 years on the island.

Apart from damage to her large, pink sign, Ms. Star said her store on the boardwalk mostly survived the storm. However, she said the problems on Surf Avenue were far worse.

“My store on the boardwalk is fine, thank god, but my store on Surf Avenue is just totaled. It’s demolished,” said Ms. Star. “The structure itself is O.K.–it looks O.K. But everything inside the store must have been churned with this whirlwind, powerful whirlwind of that just–everything, it destroyed everything. Everything is soaking wet full of, like, disgusting sewer .”

Ms. Star said she was worried about whether her insurance would pay for the destruction caused by the hurricane.

“It’s such a hassle when you’re down here and you’re trying to get insurance. No one wants to insure, so you kind of agree to all these things,” Ms. Star explained. “So, I kind of have this bad feeling that I may not have flood insurance for that reason. Like, who wants to insure you when you’re on the like this?”

Barry Flynn, a manager at the ice cream shop Coney Island Cones, was biking along the boardwalk after checking out the store. He pointed toward the beach and said sand dunes that had been created to prevent flooding were completely wiped out by Sandy.

“They put up sand to stop the waves, but it didn’t stop them,” he said.

Mr. Flynn said his store weathered the storm well. He lives further inland and his car was destroyed. However, he said many others on Coney Island had it far worse than him including residents who had their homes and possessions destroyed, but lack the resources to find temporary housing or rebuild.

“Some people have no place to go. Coney Island is inundated with poor people, that’s the really hard thing,” said Mr. Flynn.

City Council Speaker Christine Quinn came to Coney Island after surveying the intense damage in nearby Sea Gate with Councilman Domenic Recchia and Assemblyman Alec Brook Krasny. She told us the city is making extensive efforts to get food and to the residents of Coney Island. She also urged anyone in the area who needs help to get to one of the evacuation centers, which are still open.

“There is a large effort being coordinated out of the Office of Emergency Management to get more food–first to the shelters that were out there, because there’s more people at the shelters than they thought there’d be. Two, to get to neighborhoods and food to neighborhoods where people were in Zone A and may have stayed,” Ms. Quinn said. “People still should know the shelters are open and that they can and should go there. And that’s going to be the easiest way to get food and , because that’s the first point we’re going to take it to, and then we’re obviously trying to get , and trucks and food to other spots as well.”

For her part, Ms. Star sounded optimistic that life on Coney Island will return to normal.

Click the slideshow to see photos of the damage in Coney Island.