The crowded presser for the factory of the future. (Photo: Shapways’ Instagram)

This morning, Betabeat ventured forth to the industrial environs of Long Island City for a ribbon-cutting at what’s being billed as the “factory of the future.”

Naturally, quite a few tech scene regulars were in attendance, like New York City Economic Development Corporation president Seth Pinsky. But, by and large, it was mayor Michael Bloomberg’s show–that, and of course Shapeways, the company that’ll soon be 3D printing user-generated designs right were we were standing.

“There are plenty of good reasons we want New York City to be the epicenter of the industry, something, folks, that the factory and the research lab here at Shapeways will help make possible,” he told us, before adding, for anyone missing the point: “This is the future of our city.”

“We have to compete with other cities around the world, and I think we are well on our way to do it, but we certainly cannot let up.”

Shapeways, which also has offices in Seattle and the Netherlands, got its start abroad but has been headquartered in New York since 2010. However, this is the company’s first production facility here in the city. Once it’s up and running, the factory will hold fifty industrial-scale printers, capable of producing 5 million products a year. It’ll also contain a research lab, devoted to advancing the technology.

At 25,000 square feet, it’ll be the biggest 3D printing facility (for individual consumers, that is) in the world.

However, when we arrived, all we saw was an enormous empty space–the kind of echoey void that makes you want to strap on a pair of 3D rollerskates. In one corner of the room, everyone had gathered around the pastries and coffee dispensers (provided by Joyride, of course); in another, someone had set up a podium, a cluster of chairs, and a table covered in 3D-printed tchotchkes. Chief Digital Officer Rachel Haot was already floating through the crowd, meeting and greeting, and we saw Queens Tech Meetup ringleader Jukay Hsu roll up with a cup of something warm in hand. A commercial on infinite loop was projected onto the far wall.

Upon sitting down, it took a moment to realize one of the objects on the table, a little tree and child’s swing inside of a bird cage, was actually ticking off the time with tiny jerking movements.

“By forming a critical bridge between the tech and manufacturing centers, [Shapeways’ factory]’ll give other companies the idea they need to be here,” said Mayor Bloomberg. “It’ll also help us bring the city’s industrial sector directly into the twenty-first century and it will add to Long Island City’s reputation as one of the hottest spots on the planet, where tech companies can grow.”

“It is really potentially one of the great transformations in this country, in the world, of how we go from an idea to something that’s useful.” Though, of course, some of the products on the table veered more in the direction of decorative.

Pointing out that the facility’s opening would create fifty manufacturing jobs in its first year alone, the mayor took a moment to trumpet the state of the city’s employment statistics: “Today there are 3.8 million jobs in the five boroughs. It is an all-time high record. Last time we were even close to this was 43 years ago.” He also noted that, while the city has less than three percent of the country’s population, this year it’s created nearly eight percent of the private-sector jobs in the country.

Soon to be full of 3D printers. (Photo: Shapeways’ Instagram)

Besides the ribbon-cutting, the mayor had also stopped by to launch a “next top makers” competition. New Yorkers will be able to upload pictures of something they’d like to design–electronics, home decor, whatever–and five projects will be selected by product design experts, with a sixth chosen by public vote. Those six teams will then participate in a “five month design studio” to develop their product, including working with mentors from Shapeways, Adafruit Industries, and Honeybee Robotics.

In September 2013, the most promising business will get a cash prize.

“Yes, the name of these companies–Shapeways, Adafruit Industries and Honeybee Robotics–don’t have the same ring as something conventional like Bloomberg LP does, but it’s a different world, you guys,” he said, sounding a little like Jean-Luc Picard adjusting his cummerbund on the bridge of the Starship Enterprise.

Next up was Shapeways CEO Peter Weijmarshausen. “So what is Shapeways? Shapeways is a platform for anyone to make, buy and sell their own personal products–things you care about.” They’re already making 100,000 products or more on a monthly basis, and that number is growing quickly, he said.

Several of the 50 industrial-sized 3D printers soon to inhabit the space were already at work in a room just off the main space–“We already, in true startup fashion, are driving this car whilst we’re building it.” Once everything’s up and running, the facility will do production, post-processing (like dying and polishing) and sorting and distribution, right from the Long Island City space.

That means the company can produce between 3 and 5 million products in the space every year–faster, more affordably, and with less damage to the environment.

After the other speakers had said their part–including Queens borough president Helen Marshall, who turned around and extended a personal welcome to Mr. Weijmarshausen and his company–it was time for the actual ribbon-cutting which, like so many of the 3D printed objects on the table, was largely decorative rather than functional. Several Shapeways employees simply took a ribbon and held it up so that Mayor Bloomberg could cut it, using a pair of 3D printed scissors.

But before the crowd parted ways, a quick Q&A offered the mayor a quick chance to–as always–be booster-in-chief for New York City. Achieving utter tech sector dominance, he explained, is largely a matter of attaining critical mass. “People will say, ‘Oh, we have no chance of being bigger in technology than Silicon Valley.’ That’s not true.”

“Once you get the critical mass here, I’ve always thought that New York’s value proposition is a better one, because here people that you want, the best and the brightest, also can partake of great cultural institutions and a very diverse community, so that they can practice their religion and have the kind of food that they want, try new things.”

That, and there’s a hell of a lot more nightlife. 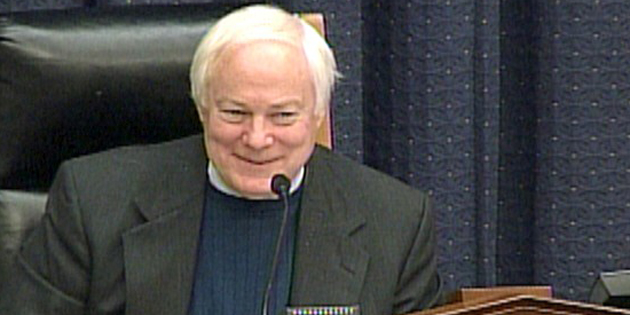