[youtube http://www.youtube.com/watch?v=eQfjMJpWrUU]
“You can tell the building is rocking back and forth because you can see the pocket doors hitting the wall,” said Eric Williams, a computer engineer waiting out Hurricane Sandy in his apartment on the 46th floor of the W Hotel and Residences in the Financial District. “It’s such a slow sway you don’t really see it, but you can feel it.”

Most of the building had been evacuated because of its proximity to the water, and he’d just received an email from the building management warning residents that the power would be shut off in the next hour, basically nixing elevator use, but he and his roommate were planning to wait it out. They didn’t fear floods on the 46th floor, but both of them were motion sick. He couldn’t see the building’s sway in glasses of water, but it was visible in the pots of water they’d filled in preparation for outages, a slow ripple from one side to the other, as though a hand were gently shaking the pots back and forth.

“If I would have known we were going to be motion sick, I don’t think we would have stayed. I didn’t know it would affect me this way,” said Mr. Williams, who felt distinctly dizzy after a day of swaying back and forth. He had known the building would move, of course, but it was hard to know how it would feel before it happened; during Irene last year, he’d lived in a mid-rise.

Still, the view was, as always, unparalleled. “We’re facing south to the Battery; we can see if the water’s coming up. A lot of police are driving down there.”

Not that there is anything to worry about at the top of a skyscraper during a storm, Tom Scarangello assured The Observer. Mr. Scarangello, the CEO and Chairman of Thornton Tomasetti, the engineering firm behind many of the city’s recently-built skyscrapers, including the New York Times building, said that the city’s skyscrapers are built to withstand winds high above 100 miles per hour. Indeed, the swaying is part of the building design (flexibility is an asset in high winds), even though most new buildings are designed to minimize perceptibility, dampening the motion that residents can feel.

Mostly, he said, skyscraper dwellers need an additional visual or audio cue to perceive the building’s motion: a creaking from the Sheetrock, or a wobbling flagpole seen from the window.

“The New York City building codes are designed for over 100 mph winds; they’re very robust. Tall buildings, because of the nature of the construction and their possible exposure, they get a lot of scrutiny because the consequences of failure would be so extreme,” Mr. Scarangello told us. “The main danger to the building in a storm is water damage. Once water breaches the building envelope and wind gets inside, you have major structural damage.”

None of this should concern building residents during a storm, Mr. Scarangello said. The only thing they should worry about is flying debris hitting the windows.

“We know that people put all sorts of things on their roofs in this wonderful city,” he said. “The glass is strong enough for wind loads, but not for impacts from unanticipated objects flying around. It’s a low probability, of course, but I wouldn’t be hanging around windows.”

Andy, a resident who lives on the 21st floor of the W Hotel in Hoboken, said he was more worried about the water than the wind when we called him earlier today. Not that the wind wasn’t doing a number on his apartment.

“The building is rocking and rolling, the chandelier is shaking back and forth. I actually saw it moving in a circular motion,” he said, sending us a video of said chandelier. When he wasn’t watching his quavering lighting fixtures, he was staring at the Hudson (of course, he had an excellent vantage point).

“It looks like the ocean; there are whitecaps,” said Andy. “The building is only about 30 or 40 feet from the Hudson. We’re mostly concerned about flooding, that the lobby will flood and we won’t have a way to get out.”

At New York by Gehry, 18th-floor resident Kathy Williams said that she wasn’t feeling anything. Yet.

“I haven’t really been looking; I’ve been watching TV, ” Ms. Williams confessed. “I’m just hoping that the builders did their job right and I’ll be okay.”

At Mr. Gehry’s other building, Beekman Tower in Midtown, the guests were nonchalant, the front desk attendant told us. No complaints come back from guests sickened by any swaying motions. But then, Beekman is a mere 26 stories.

“It’s really nothing major. The restaurant is closed and most of the guests are hanging out in the lobby, reading a book,” he said.

In fact, the scariest thing about skyscrapers during Hurricane Sandy seems to be living next to one that’s under construction. 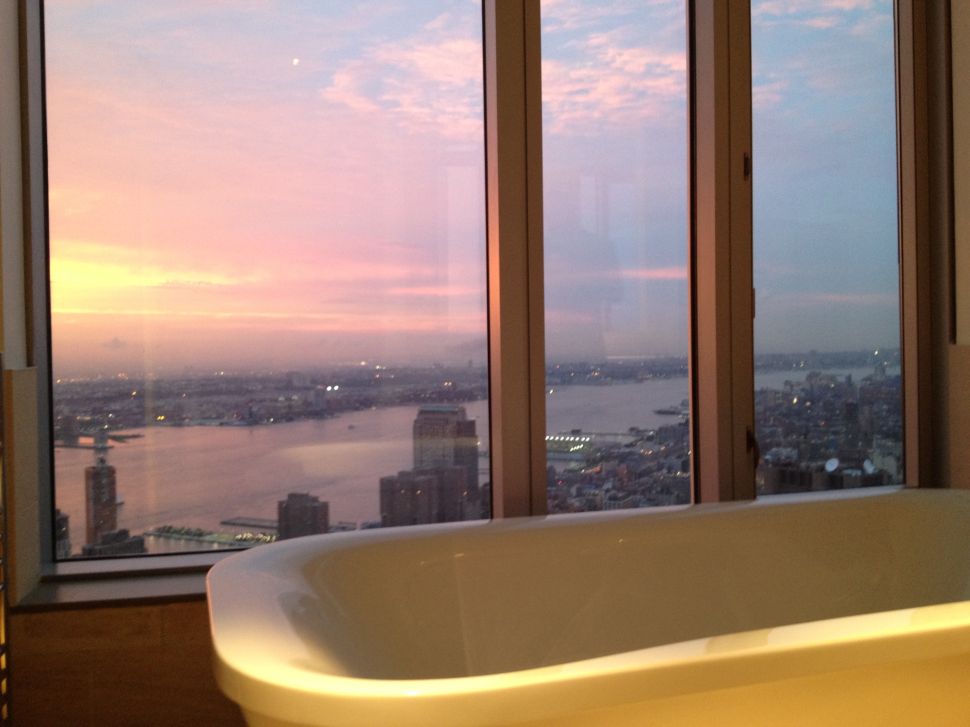