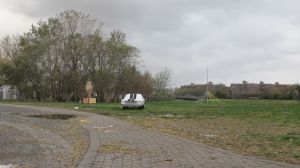 “Ninety percent of the park was under water,” Lars Fisk told Gallerist yesterday standing in front of the gate at Socrates Sculpture Park, the outdoor exhibition space along the East River in Long Island City. Mr. Fisk, the studio and facilities manager at the park, said he spent all Monday night there staving off the damage that Hurricane Sandy attempted to wreak on the artwork, which seemed ready to float away.

“One sculpture was toppled by the wind,” he said, referring to Melissa Calderon’s Indivisible, an 800-pound sheet metal sculpture with a four-leaf-clover motif. It is is part of Socrates’s “2012 Emerging Artist Fellowship Exhibition.” “I was concerned it would get blown away,” said Mr. Fisk who chained the work to a tree to prevent it from further harm. Though it was “crumpled,” the damage, he said, was “salvageable.”

A transparent floating Buddha in the river, a work by Chang-Jin Lee called Floating Echo, was one of the biggest challenges.  “We had to deflate it and cover it with a heavy tarp.”

In the corner of the park, at the studio of Mark di Suvero, the park’s founder, steel I-beams peaked out above the treeline. While none of his sculptures on site were harmed, Mr. di Suvero’s studio up the street was flooded badly and many prints, works on paper and likely some equipment had been damaged.

Mr. Fisk pointed to a weeping willow that was one of several old trees that were downed—the most serious harm done to the park. Other than that, the damage was minimal. We asked about the Mustang painted spanking white with two black stripes across the top, which was sitting at the center of the park. “Nope,” said Mr. Fisk of the car, which is a work by Hugh Hayden. “That was untouched.”