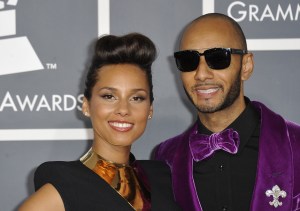 When we last heard from music producer Swizz Beatz, back in December, he was talking about opening a gallery. “I feel like I found the new Warhol in Japan, the new Murakami in Hong Kong,” he said in an interview on Jay-Z’s Life and Times website.

There’s no sign of that project yet, but in an interview with T: The New York Times Style Magazine, Swizz, a k a Kaseem Dean (who’s married to R&B singer Alicia Keys), talks a bit about collecting (he owns work by Ansel Adams and Peter Max) and his burgeoning art career. He also shares a story about Jeffrey Deitch:

Jeffrey Deitch once told me that I reminded him of Basquiat when he first came in, and I thought that was a huge statement because I’m like, Basquiat is on a different level! But once I digested it, I understood what Jeffrey meant: Basquiat had the same hunger and passion. He was young and out there and into music and in a place he probably wasn’t supposed to be. I took that as a great remark.