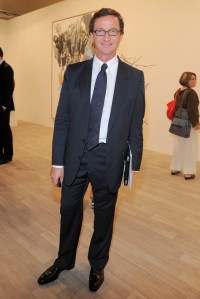 Back in June, you may recall that Thaddaeus Ropac was not pleased at the announcement that Gagosian will open a new gallery in Paris this fall, just as Mr. Ropac will, with a debut show featuring the work of Anselm Kiefer, the same artist Mr. Ropac had planned to use for his debut show in his new space. The Financial Times‘ Georgina Adams said Mr. Ropac was “furious” about the Gagosian plans.

However, The New York Times today has a story about the two galleries and, in it, Mr. Ropac seems content to let bygones be bygones.

“I think it’s totally exaggerated, I’m quite relaxed about it,” said Mr. Ropac, touring the Pantin space as dozens of workers installed phone lines and raced to finish construction. “We’ve planned this for a long time, and if Larry decides to do something similar and also do something with Kiefer, then at least we were the first to announce it. It’s an interesting move. I think it’s good for Paris, it gives it another dimension.”

The Times story also features a new detail about the Gagosian space. It apparently features “three large skylights and a rare feature for a gallery: a 340-square-meter mezzanine giving elevated views of the art, with a drawbridge that can be lowered to allow works inside.“ Hard to visualize, but, intriguing!