In January of 1968, the beginning of a year when the world caught on fire, Guy Ferry was born in a hospital in Columbus, Ohio. And in that moment, though America would not realize it for years to come, she had welcomed into her heartland perhaps her greatest homegrown besmircher, the seed of her undoing. A baby then, now a middle-aged man, Ferry would go on to gain weight, change his name to the more ethnic-sounding Fieri, frost the tips of his hair blond, wear his sunglasses on the back of his head, become a Food Network star and open, at the beginning of September, Guy’s American Kitchen and Bar in Times Square, a restaurant that would be indicted for crimes against humanity, if only that crime fell within the Department of Health’s purview.

It would be disingenuous to claim that Times Square represents anything but a regurgitation of the American dream, monetized, metastasized, made blindingly bright by light-emitting diodes and shoved back down the gullets of those souls unlucky enough to have mistakenly stumbled into the red zone, or worse, like moths to the incinerating flame, have actively sought it out. To deride Mr. Fieri for opening his restaurant there as if he’d taken a dump in the Louvre is silly. He pooped on a pile of bright shiny poop, Jeff Koonsian poop, Guy Debordian poop. But public defecation is still a crime in New York City (Health Code Section 153.09), and his offenses rest not in their location but in their very nature.

Mr. Fieri not only serves truly horrible-tasting food, an awkward origami of clashing aleatory flavors, but he serves this punishing food emulsified with a bombastic recasting of deep-fried American myth. Mr. Fieri’s most egregious transgression isn’t what he puts into his fellow citizens’ stomachs, it’s how the cynical slop interfaces with what he puts into their minds.

The conflation of Guy Fieri with America itself begins as soon as one can discern his storefront signage, just west of the dying Daffy’s sign and just east of the benign Bowlmor Lanes guy. Above the threshold of the 500-seat restaurant sits a massive eagle crest, clearly an allusion to the Great Seal of the United States. The breast feathers of this eagle, whose head is covered in metal stars and stripes, are made of vintage license plates; its tail feathers are tiles of flattened beer cans. In place of the escutcheon, traditionally a blue chief with vertical red and white stripes, are a series of stacked car grilles. And across its chest, written in red neon, is the expletive “Guy!”

The space, which used to be a Heartland Brewery—Jonathan Bloostein, the owner of Heartland, is a partner in the new restaurant—is a massive and multilevel exercise in megalomania. Mr. Fieri’s taglines are scrawled on the wall. “Welcome 2 Flavortown” is written in large type above the hostess stand. A mammoth reproduction of one of Mr. Fieri’s tattoos, featuring Botticelli’s Venus with “Namaste” written above it and “Morgan,” the name of Mr. Fieri’s deceased sister, below, hangs next to the bar. There’s a chandelier made of his old pots and pans. Pictures of the chef’s favorite cars, old guitars, and stars and stripes hang on faux clapboard walls. Embedded in the bar are vials of Mr. Fieri’s semen. [Note: Only one of those things isn’t true.]

You are led by a cheery hostess—everyone who works at Guy’s American is very nice—past giant television screens showing an endless loop of Mr. Fieri opening his goatee-framed sphincter-mouth to welcome a panoply of fried matter, to a table or a booth built of such proportions that your feet dangle and you are infantilized by the scale. Immediately you will meet a tall dark stranger, and he will say to you, “Hey guys!”—a brilliant piece of linguistic co-branding. He will smile and you will order a drink that costs $15. This drink may be a Manhattan, which is surprisingly okay, or a spicy margarita, which is goonishly spicy and not okay at all.

To begin your meal, you’ll be directed to some of Mr. Fieri’s signature items, such as Vegas Fries, which according to the very large menus, are “extra crispy, natural cut fries tossed in house made Buffalo sauce, served with bleu-sabi dipping sauce,” though you’ll wonder what natural cut means, if anything at all. When they come, the fries are a sticky supernatural orange simulacrum of a former potato, fried to paralysis. “We had to figure out a way to maintain the crispness with the sheer amount of buffalo sauce we put on them,” explained a manager. You may be urged toward the Malibu Oysters, which shouldn’t exist but do, or to the Sashimi Tacos ($14.50), which, your server will say, are “out of this world.” When they arrive, they will seem out of this world, but from a weird, not-very-good-Ray Bradbury place where wasabi and sweet soy sauce looks like mayonnaise, goes with tuna and tastes delicious.

But if you are like the majority of the patrons, you’ll start with something like the Pepperoni Mozzarella Stix with Marinara ($11.95) or, from the Ain’t No Thing Butta Chicken Wing section, “sweet and sticky firecracker” wings ($13.50), which constitute a fate not even the most embittered wolf could ever wish upon a hen. You’ll quickly move on to the heartier fare, perhaps the Sangria Glazed Shrimp ($24.95), which is inedible, or Guy’s Big Bite Burger and Rojo Ring, made with Pat LaFrieda beef, once a shibboleth for good food and now just another four syllables of nonsense. In all fairness, this burger, which is ingeniously pressed so hard upon the griddle it becomes more of a beef pancake that hangs over the bun like a meat skirt, is genuinely tasty. You may even order the Cajun Chicken Alfredo ($22.95) which, per the server, has about 10,000 calories. Calories are not listed on the menu, by the way, since New York City law requires only chain restaurants to do so. “Thank God,” your server will say, grinning like Mephistopheles and refilling your .

Mr. Fieri has built his career valorizing deeply unhealthy eating habits, rhapsodizing about all that is fried, caloric and meaty in his cookbooks and on his Food Network shows, which now include not only Diners, Drive-Ins and Dives, but Guy’s Big Bite and Guy Off the Hook. And though, statistically, many more people will be exposed to his television shows than his restaurant, there seems to be a fundamental moral difference between advocating for an unhealthy lifestyle and actually providing it. This, of course, is the point at which freedom of expression turns into a sin of commission.

There’s no question that obesity is not super kewl for the future of America. According to a recent study, F as in Fat: How Obesity Threatens America’s Future, by 2030, “obesity rates for adults could reach or exceed 44 percent in every state and exceed 60 percent in 13 states.” Those 13 states, by the way, are all either in the Midwest or the South, areas from which most of New York City’s domestic tourists come. This will translate into a tenfold increase in cases of type 2 diabetes, hypertension, coronary heart disease and arthritis by 2020, and that will double again by 2030. Total cost? According to a 2012 study in the American Journal of Preventive Medicine, “The projected increase in obesity is estimated to cost the United States $500 billion in health spending between now and 2030.”

It’s also not as if Mr. Fieri is completely oblivious to the dangers of obesity. Among his charitable endeavours, touted on the Food Network website, is a foundation to combat childhood obesity. But far from absolving or even ameliorating his general crumminess, this personal commitment makes it worse. For if he were truly ignorant of the effects of his actions, Mr. Fieri would simply be a fool. Instead, he’s a villain.

But what makes Mr. Fieri truly reprehensible is that he’s exploited a mythology that appeals to the downtrodden to deliver unto them cholesterol and all its long-tail misery. By advocating an America in which the symbols of our salvation—manufacturing (embodied in those classic cars), rock ’n’ roll (the old guitars), and a return to the rough-hewn America of yore (the vintage flags, the faux taxidermy mounts)—becomes linked inseparably with a place in which pepperoni and mozzarella deserve to be rolled in panko breadcrumbs and deep-fried, where the quantity of sauce on a fry demands even more frying, where chicken alfredo has many thousands of calories, Guy Fieri is using patriotism as a Trojan Horse for his infectious and insidious garbage.

Mr. Fieri, though, was not there to witness this crime. When I visited, the chef, whose net worth is valued at $8.5 million (though it may be much more), was on a family vacation in Italy, a country where they don’t have Vegas fries and where pastas are fresh and served with olive oil. In this disconnect, Mr. Fieri is the culinary equivalent of the gun lobby, which cloaks its self-serving interests in the garments of freedom and peddles them to an older rural white population (while it is young urban black men who suffer disproportionately from gun violence).

Closer to home, Mr. Fieri finds kinship with the New Yorkers for Beverage Choice, an astroturfed front for the soda industry, designed to fight Mayor Bloomberg’s soda ban not out of the sort of Patrick Henry-esque belief in freedom that informs its marketing materials but out of simple concern for the bottom line. With Guy’s American Kitchen and Bar, Mr. Fieri joins these deeply anti-American Americans in shouting out, “Give them liberty and give them death.” 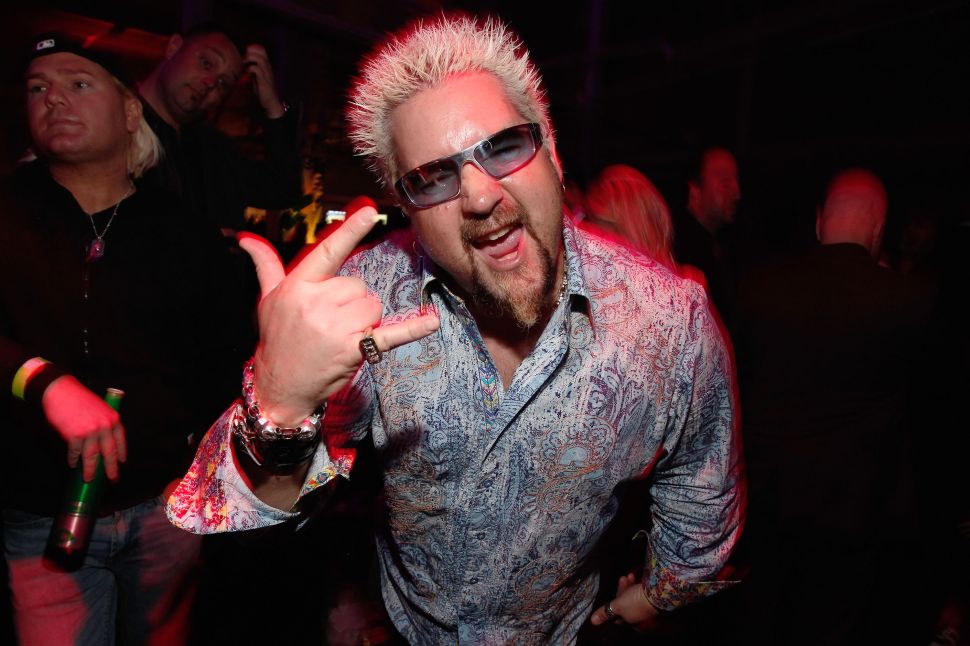