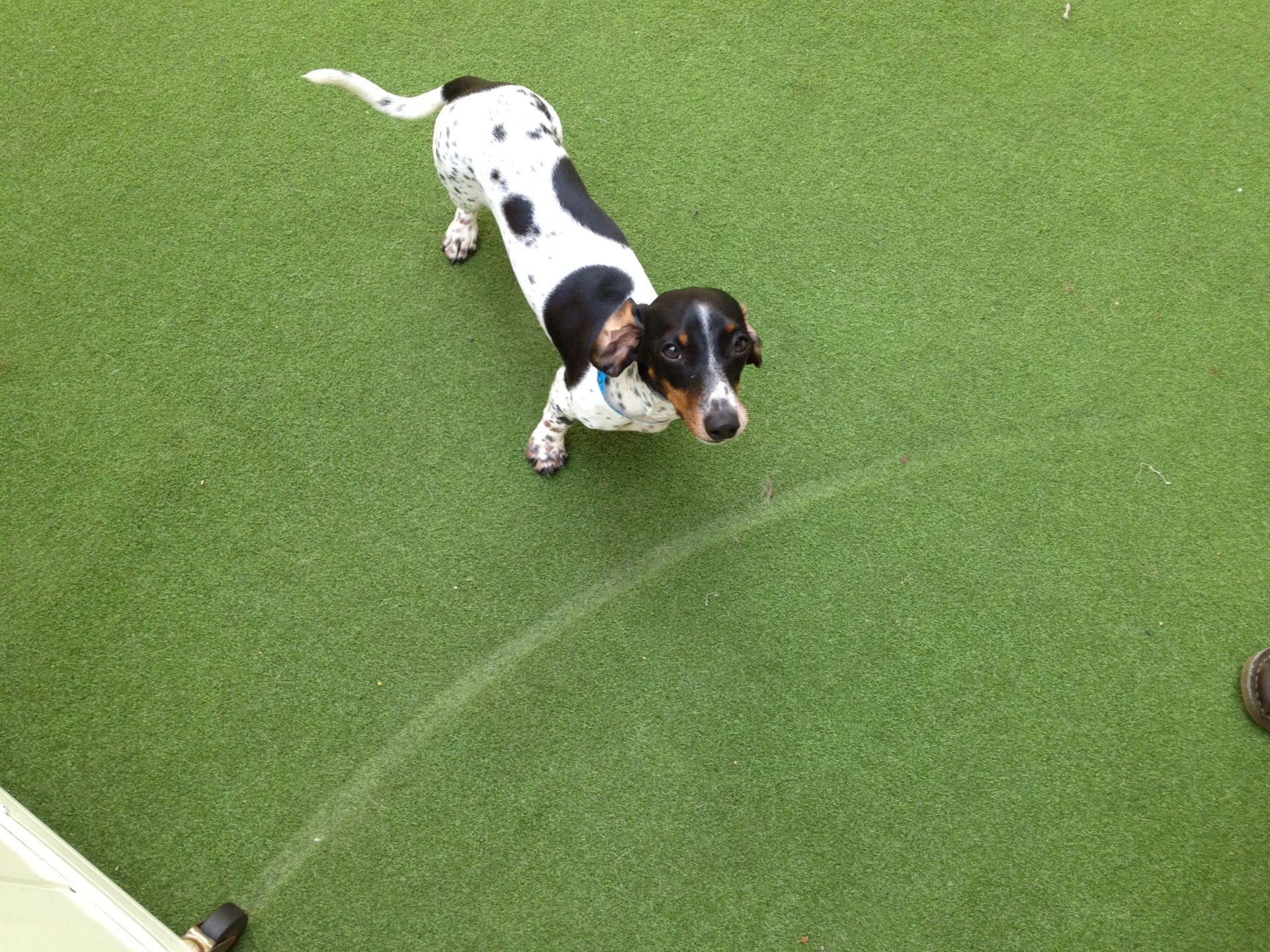 Maggie Morrissey mugs for the camera. 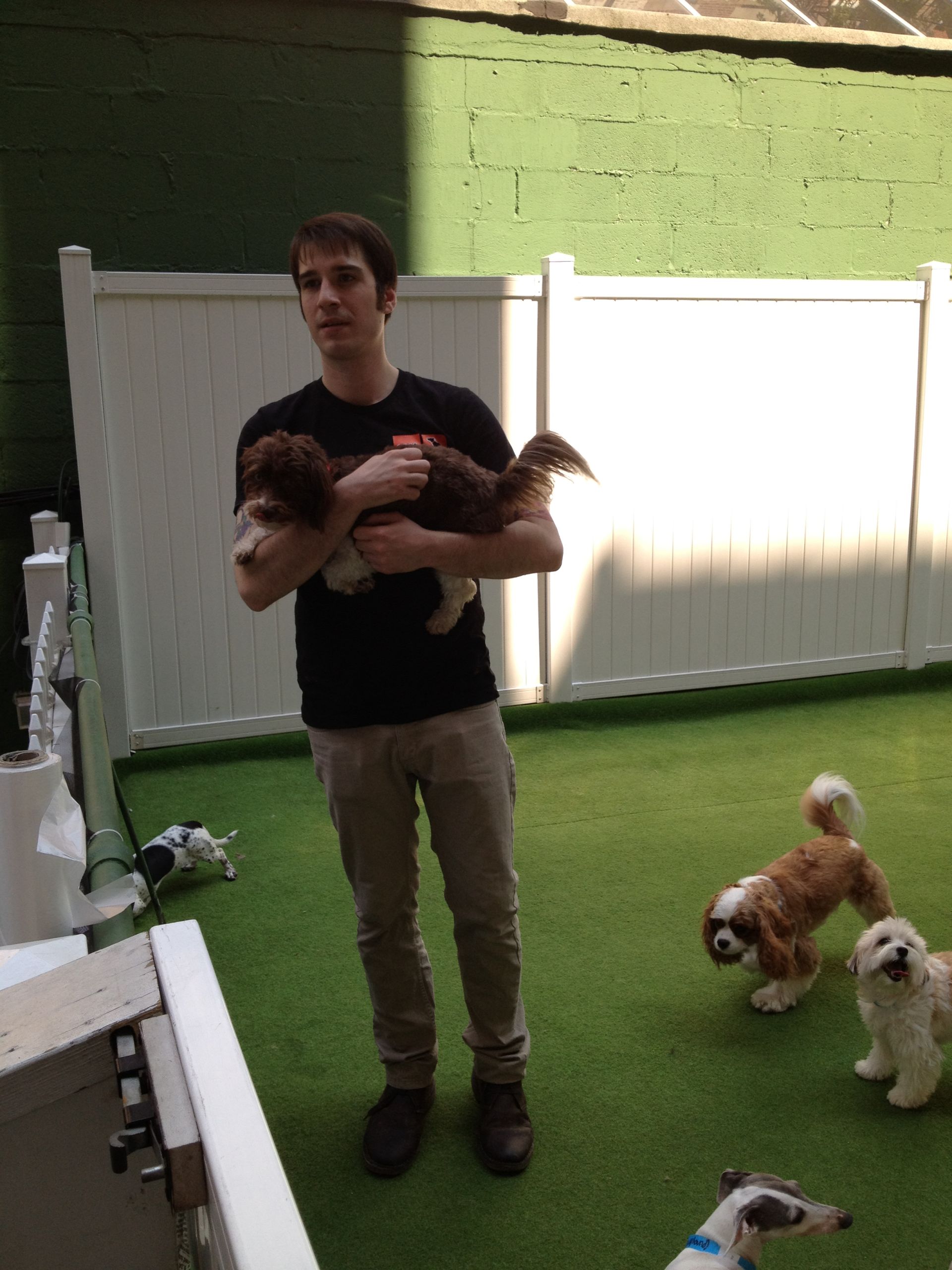 Trainer Robert Lang cuddles one of the pups in the outdoor play area. 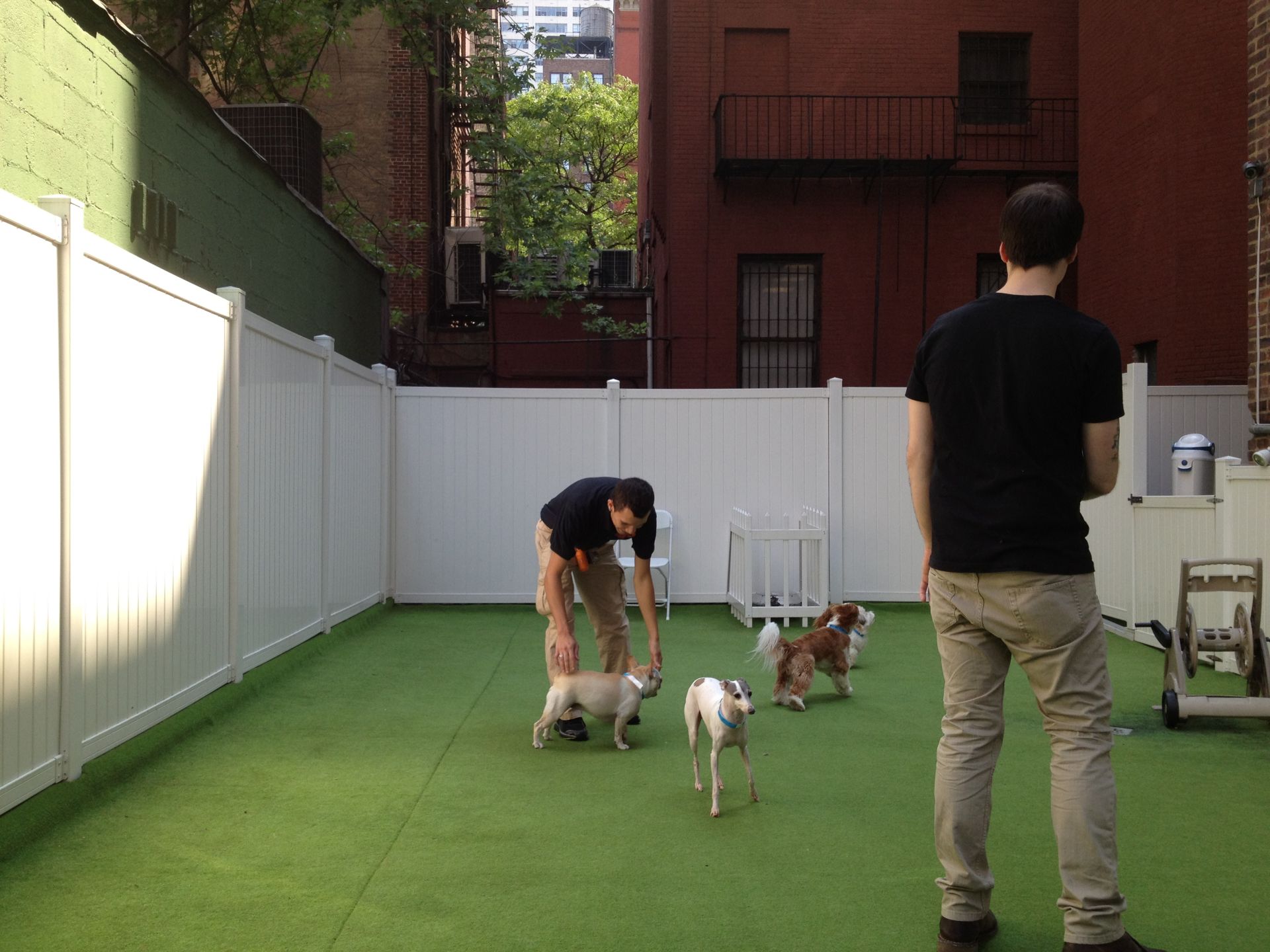 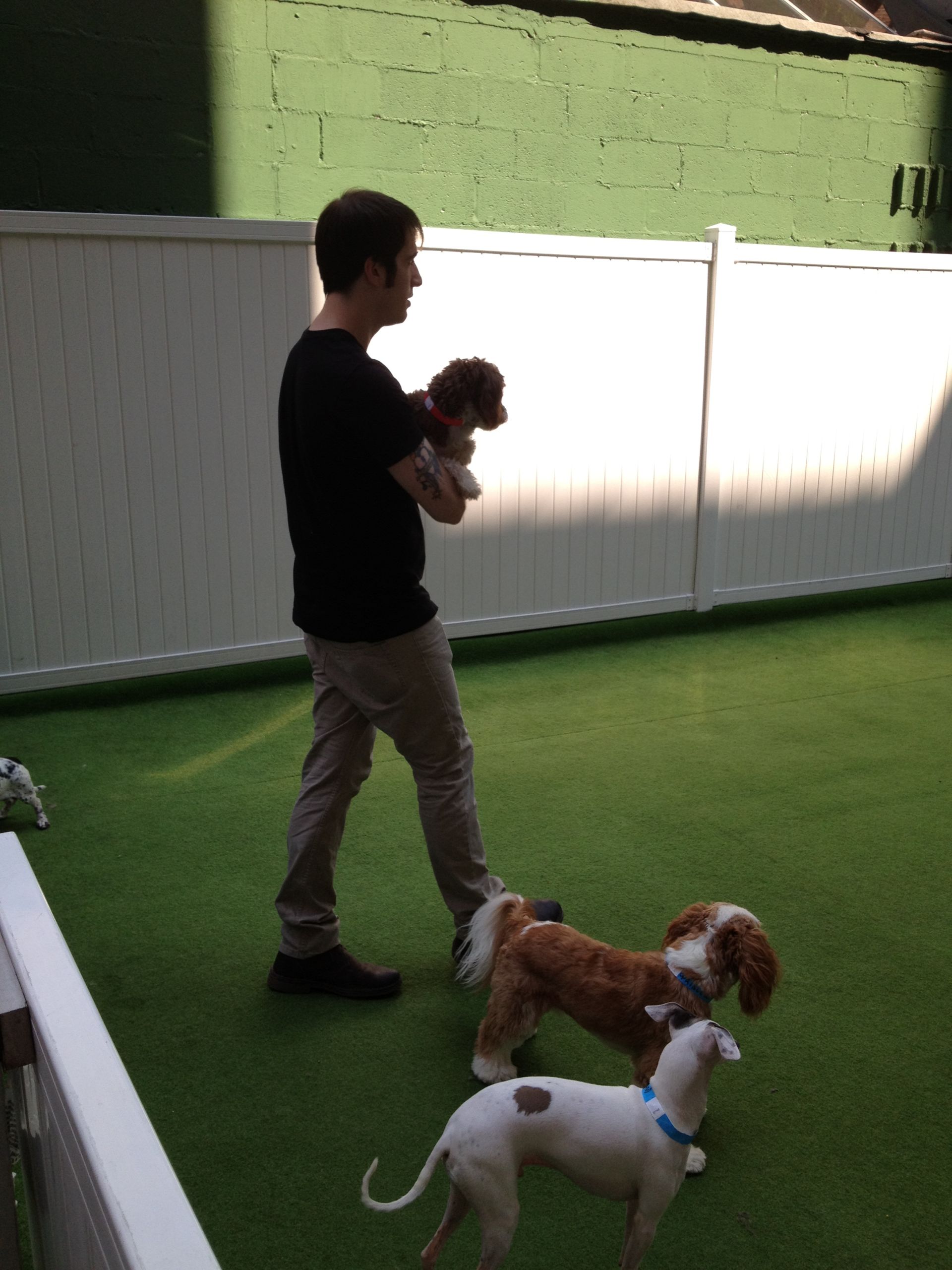 But most of the dogs seemed more interested in the trainers.
Advertisement 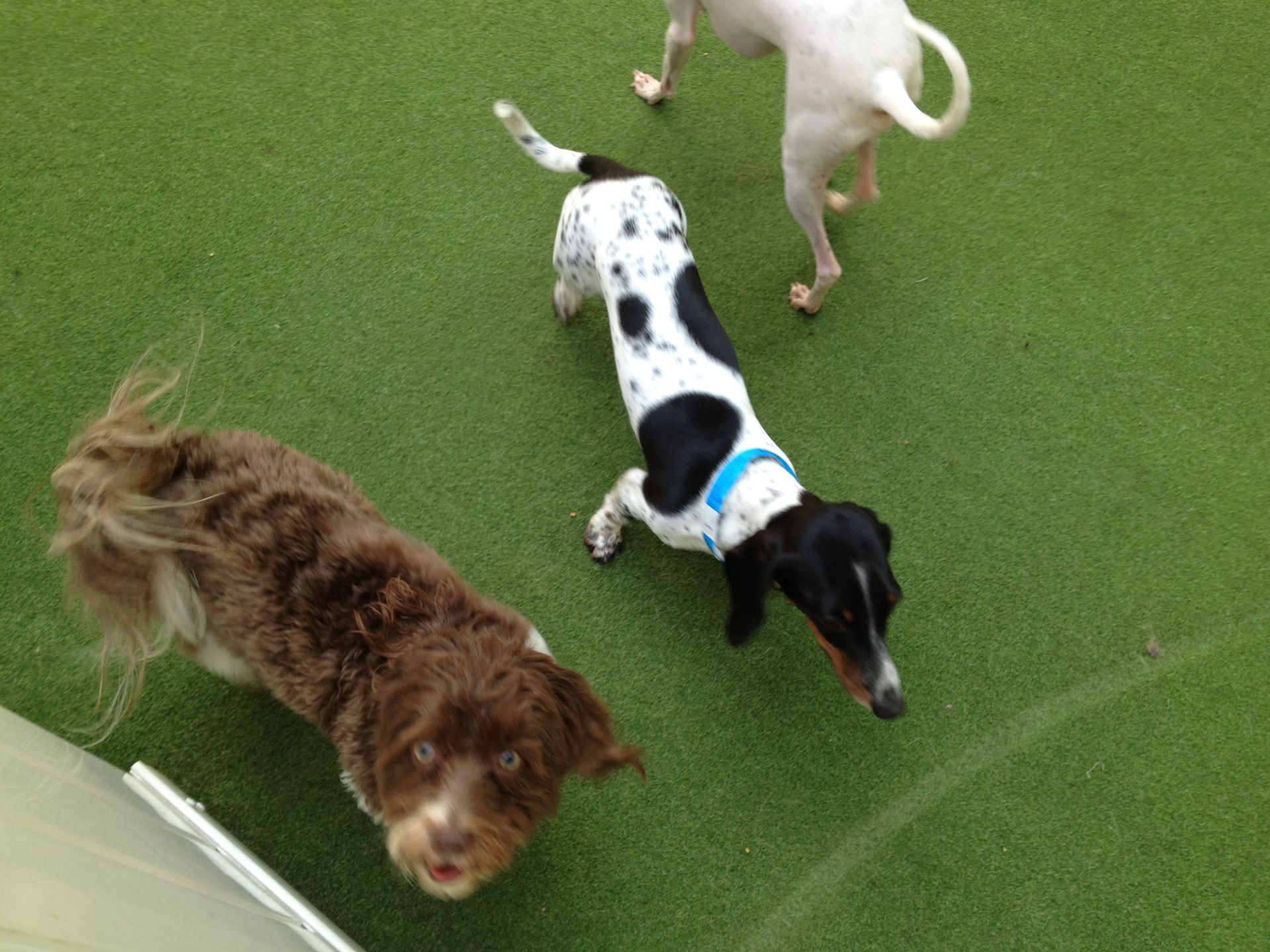 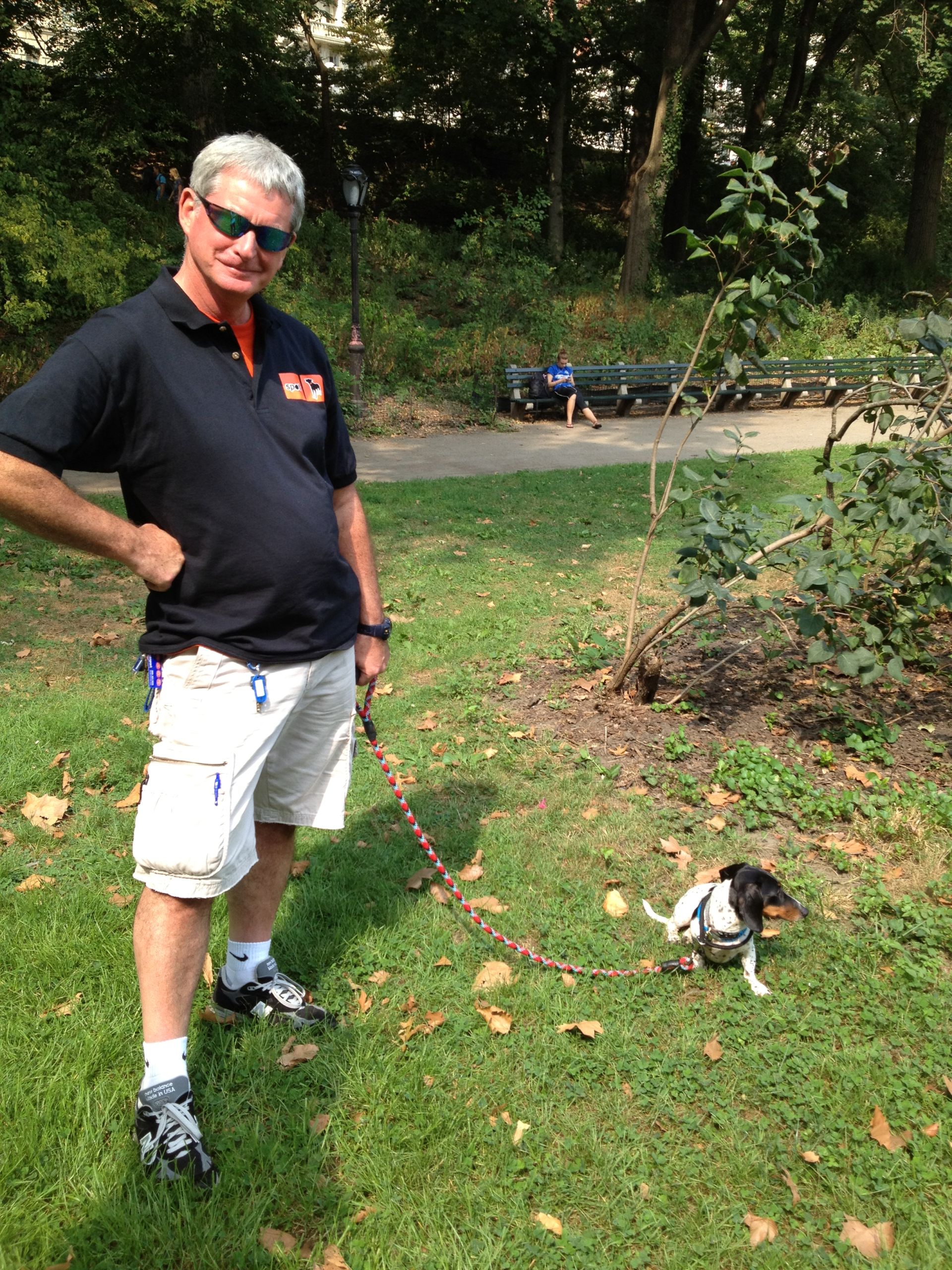 Maggie's favorite stroll is down West End Avenue, her walker Steve McNalley told us. But Central Park is a close second. 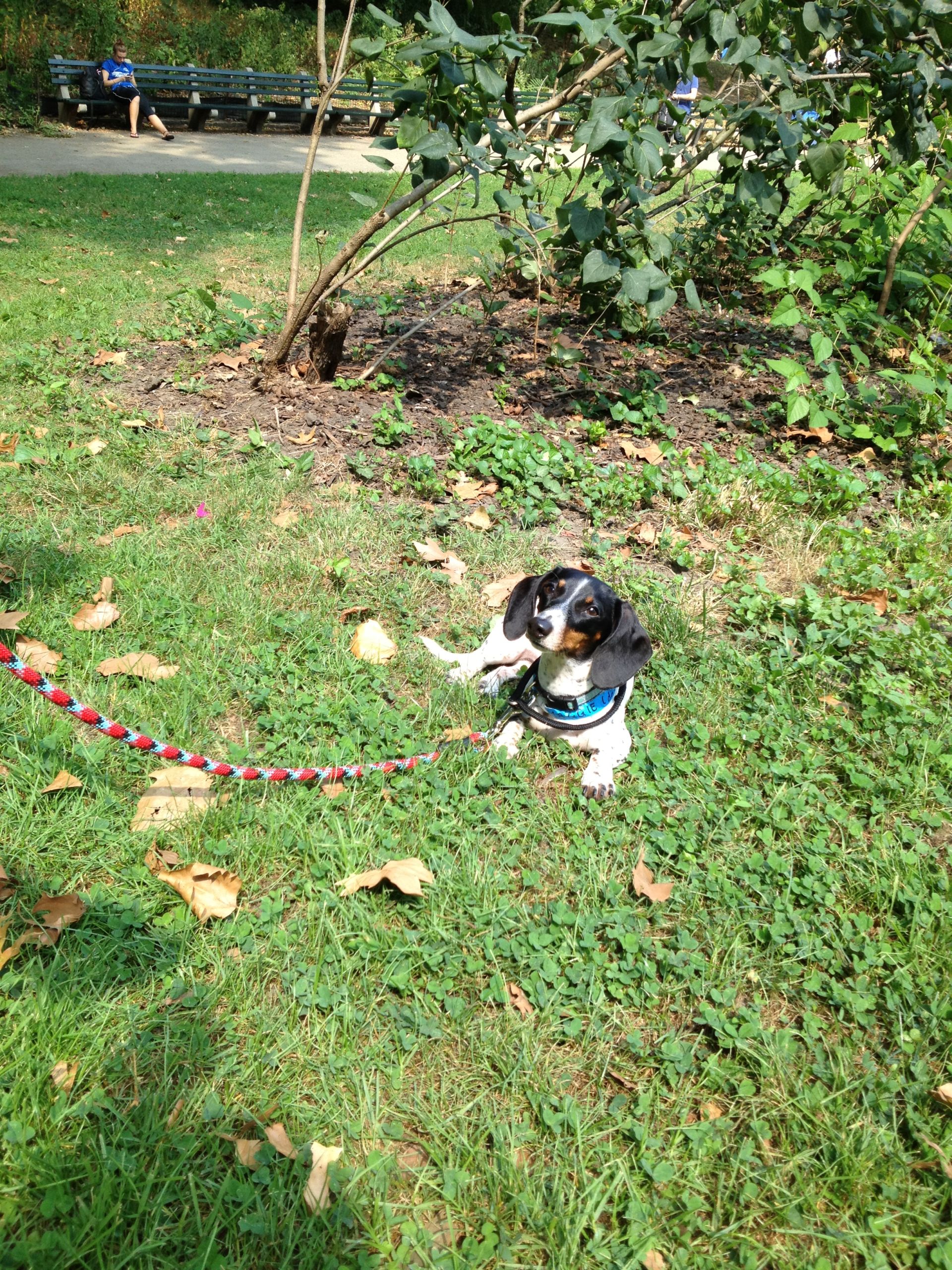 Talking a breather, Maggie relaxes in the warm sun of Central Park.
Advertisement 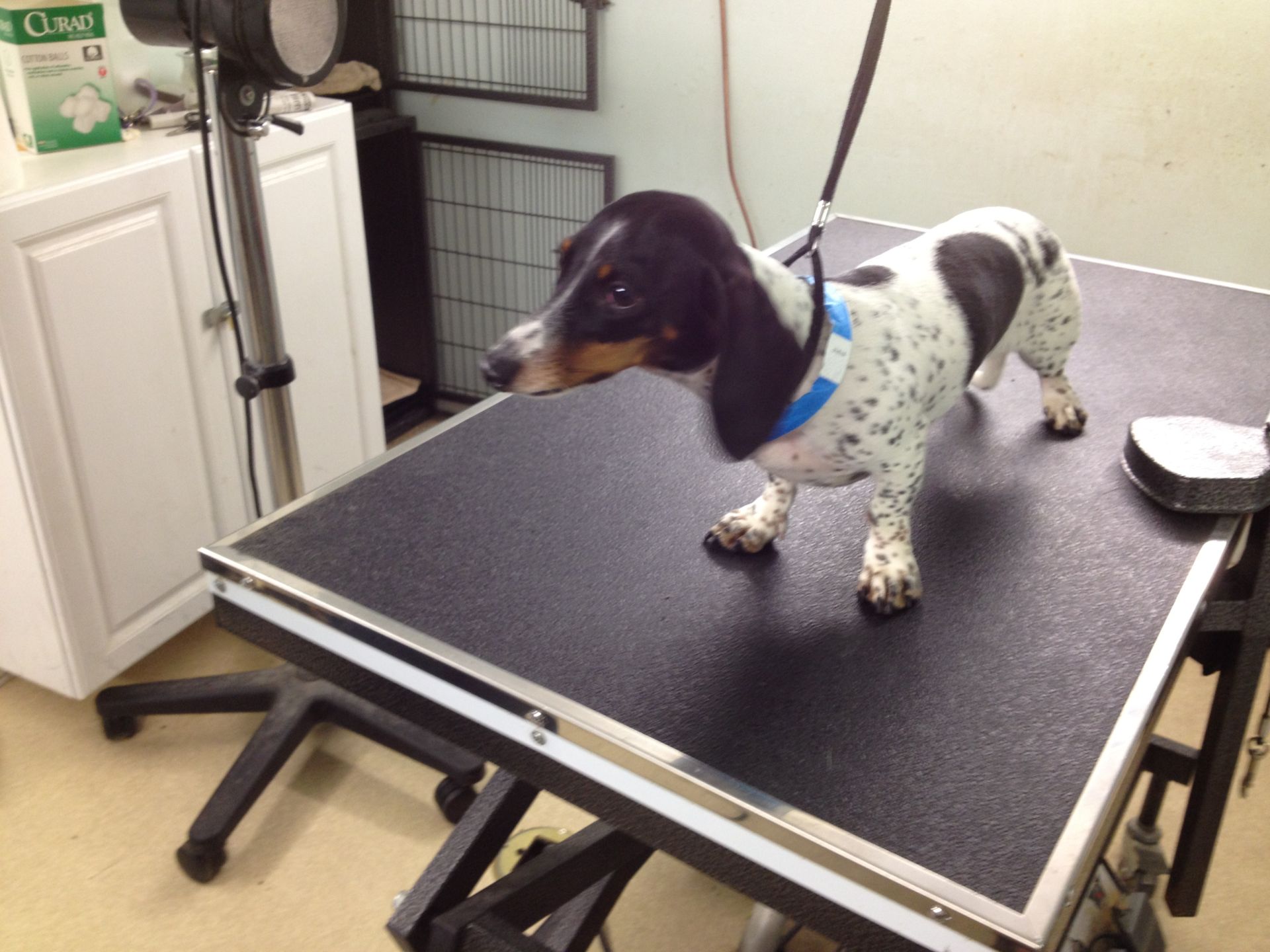 Maggie does not relish grooming time. 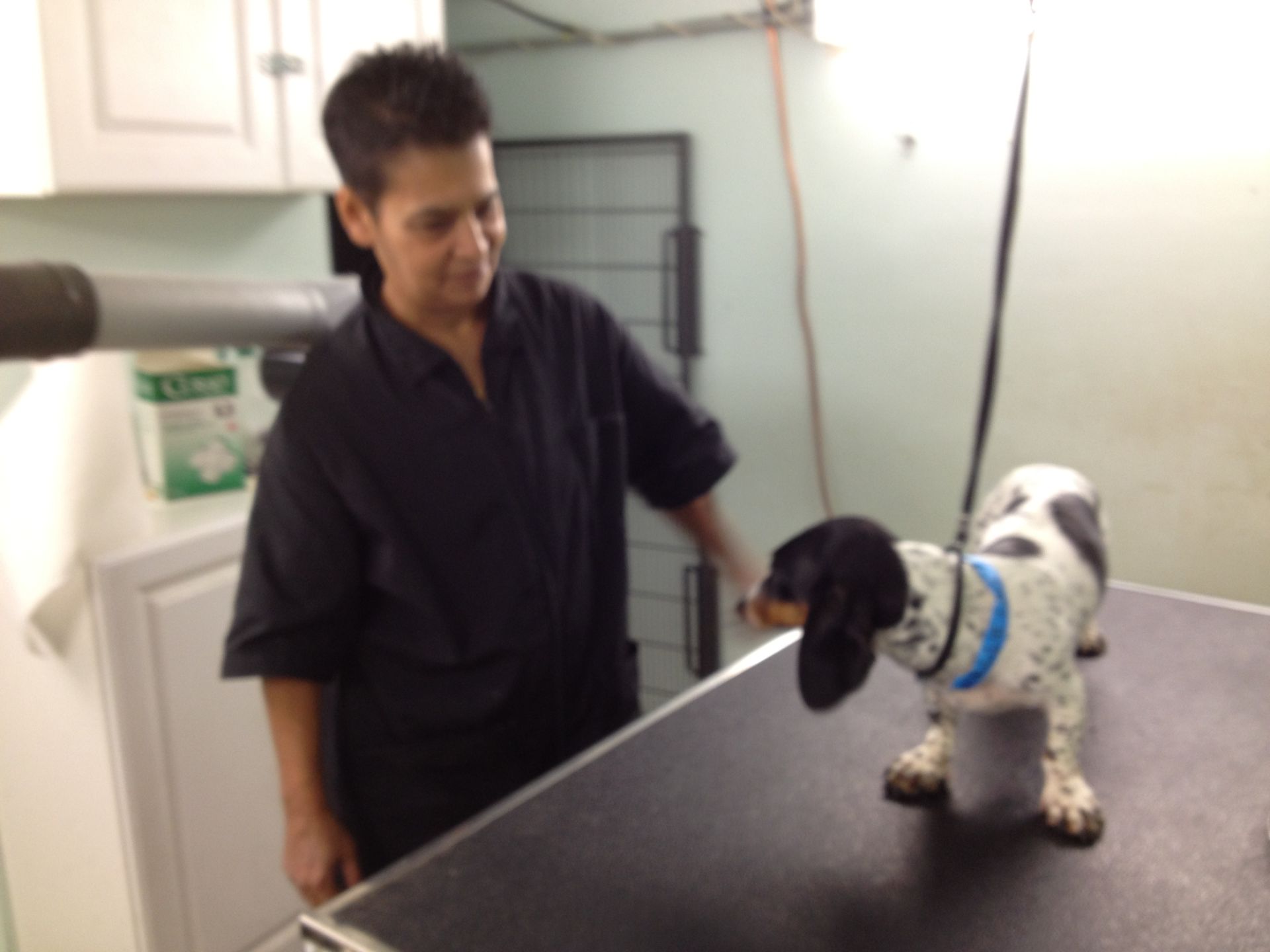 Groomer Michelle Duran cleans the ears first, making sure there's no "footy cheese doodle odor," which is a sign of infection. 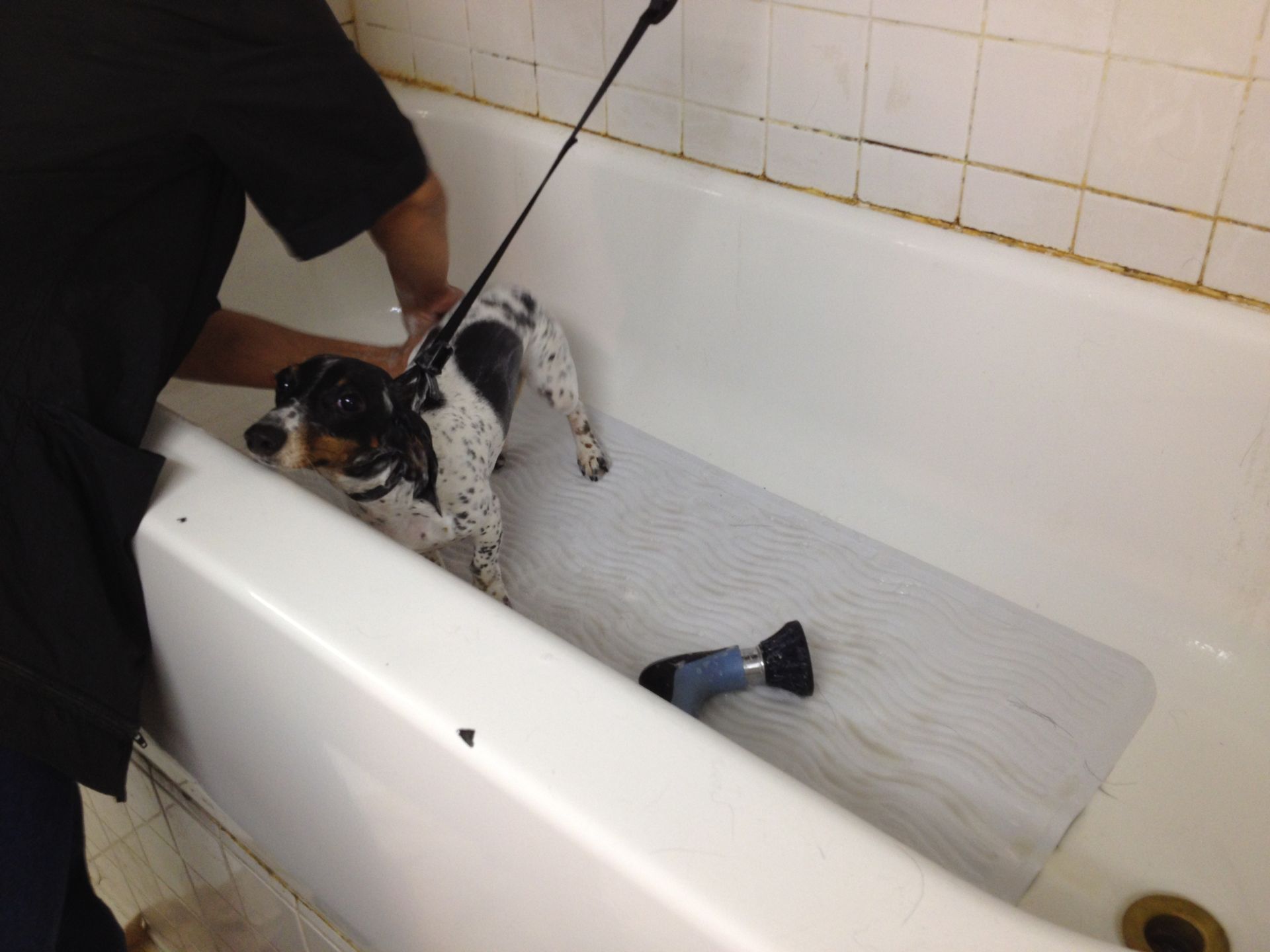 It may have been a gentle massaging bath with hypoallergenic shampoo but Maggie clearly hated this.
Advertisement 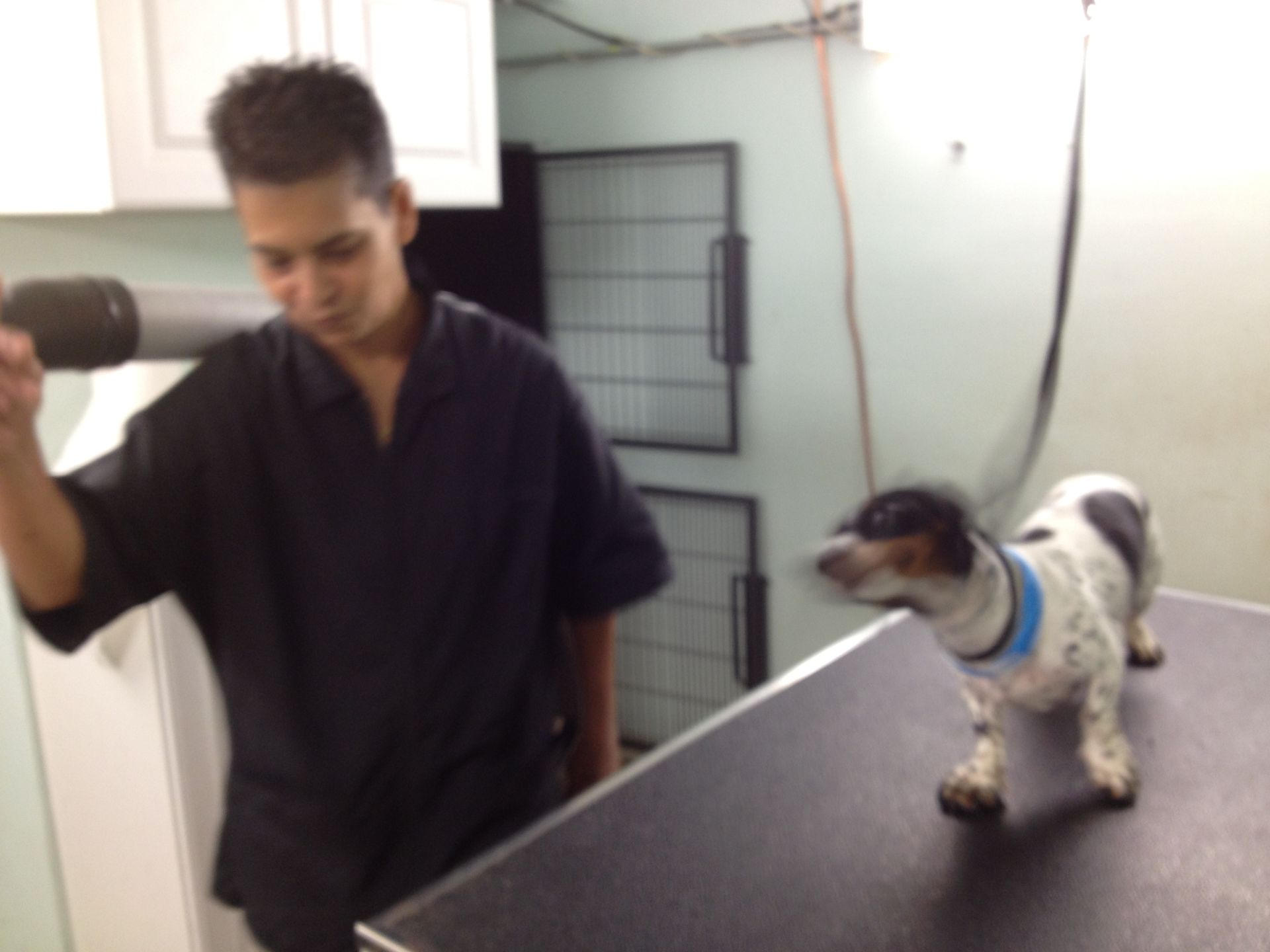 The blow-out meets the shake-out. 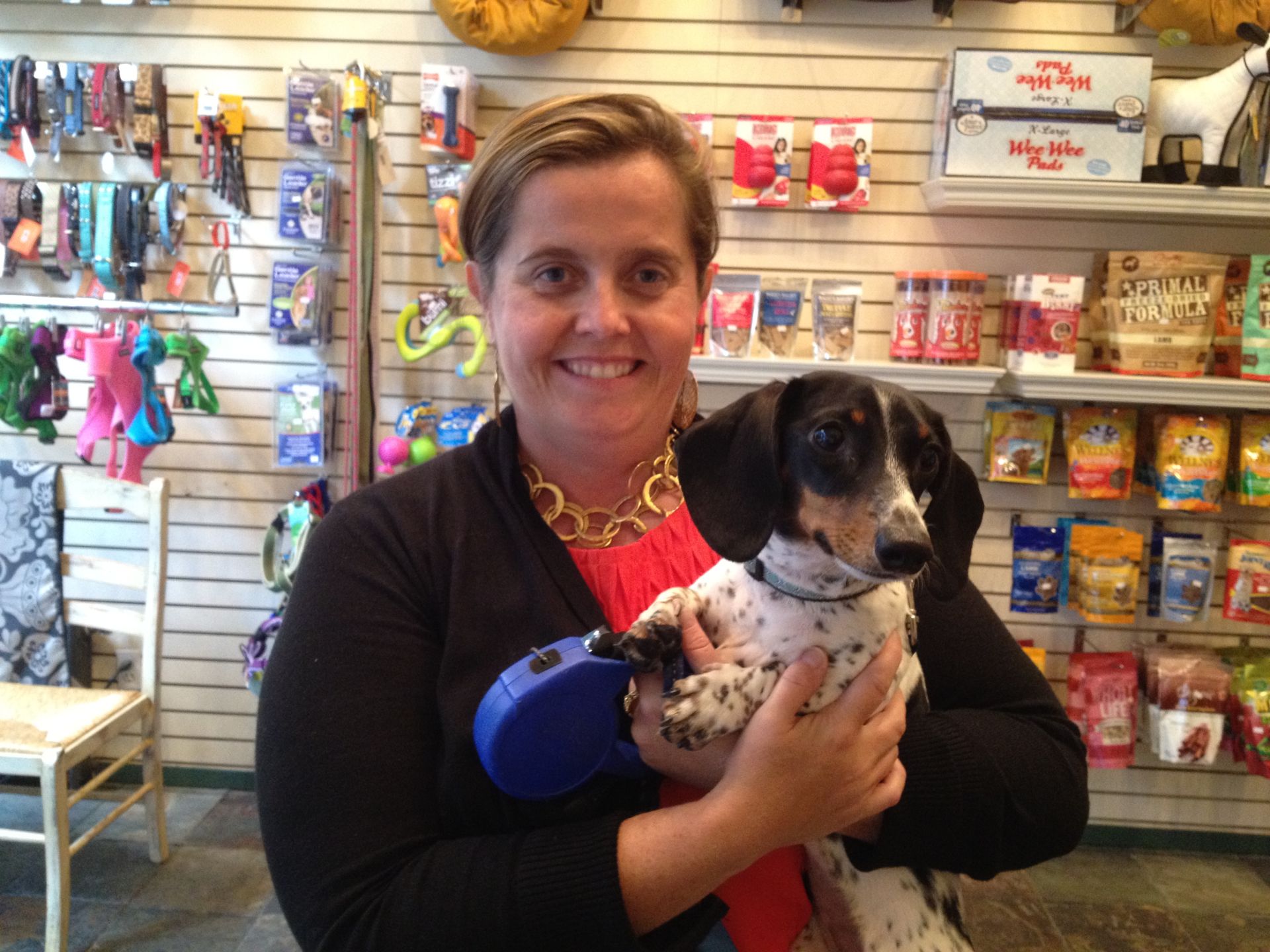 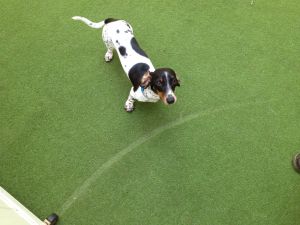 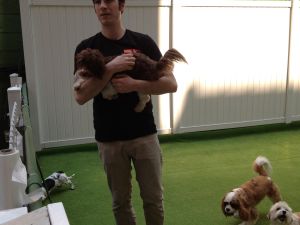 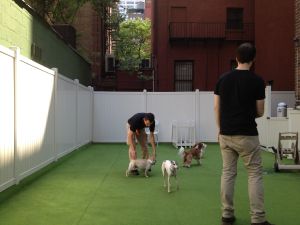 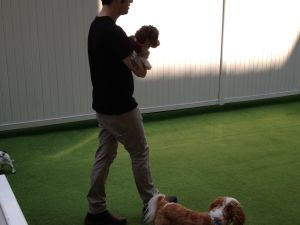 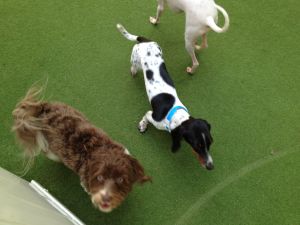 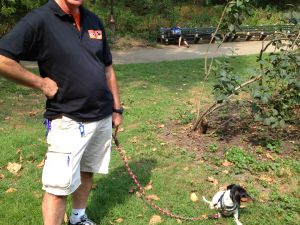 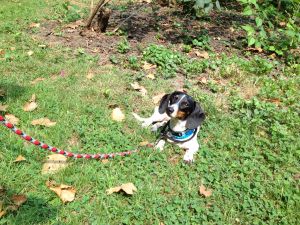 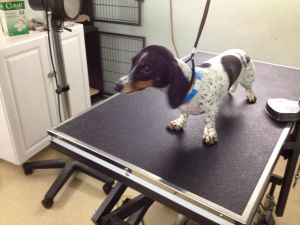 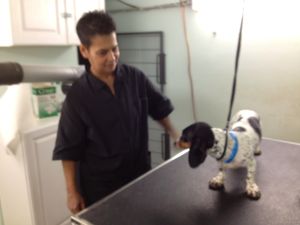 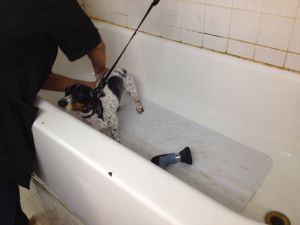 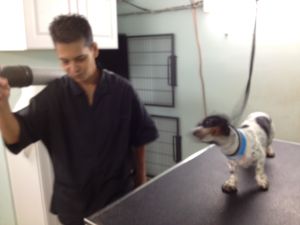 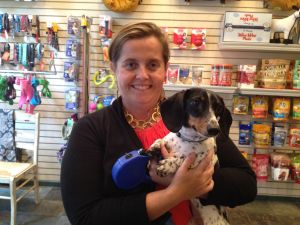 Maggie Morrissey’s day usually starts quite early. She eats a quick breakfast in the West End Avenue apartment that she shares with Bebe Morrissey and her boyfriend. Then Bebe chauffeurs Maggie to The Spot Experience, a place on West 72nd Street where she spends most of weekdays and an occasional weekend.

Arriving no later than 7 a.m., Maggie is invariably received with delight by the staff, who describe her as “the sweetest.” Bebe, who does not enjoy the same life of leisure as Maggie, continues on to her job as a literacy consultant.

At Spot, Maggie’s days are devoted to socializing, sunning, napping and going for long walks in Central Park. She is never alone, but almost always surrounded by a coterie of friends, trainers, handlers, groomers and people who not only ensure her physical health and safety, but are constantly attentive to her moods and mental state.

In spite of her lifestyle, Maggie remains extremely down to earth, and not only in the metaphoric sense: Maggie’s slender belly floats mere inches from the earth. She has the classic dachshund build, low-slung and long with improbably stubby legs, oversized feet and enormous silky ears that nearly graze the ground.

Years ago, a dog like Maggie might have spent her days bored and alone, sleeping fitfully, pacing an empty apartment, with the brief respite of an afternoon walk. The vast majority of dogs still spend their days in this way, of course. But now professionals of means have options.

The staff of Spot, a full-service dog concierge with four Manhattan locations, not only provides all the material aspects of care—supervision, shuttle service, walkings, feedings and groomings—but also obsesses over dogs’ emotional well-being and psychological development. “One of our goals is to have a bark-free day care,” said Mitch Marrow, Spot’s founder and CEO. “People laugh, but it really is a Zen environment.”

Dog walkers and doggie day care have existed for some time, but their services are generally what you might call auxiliary rather than holistic—the nice lady next door taking care of your kid vs. a child-development-focused preschool.

Spot is the Montessori of the dog world, with carefully calibrated environments built around dog psychology.

Here you’ll find none of the aggression and rough play that infects the typical dog park, contends Mr. Marrow. “It’s just like if you threw 60 kids together in a yard. Certain cliques will gang up on other cliques. It’s a very stressful and tortuous environment for the animals.”

His trainers go through more than 80 hours of instruction to learn how to assert their alpha role to ensure Spot’s virtually “stress-free,” no bark environment. Barking is seen as a sign of anxiety or aggression, a charged social signal demanding an equally charged respone. As alpha pack leader, trainers must constantly work to diffuse such tensions before they boil over.

Not that Spot’s inner sanctum is open to just any dog. There is a three-step interview process, during which trainers carefully observe how the dog interacts with the group. About 90 percent of applicants are admitted; dogs that fail are invited to work with trainers to improve their social skills.

Spot can also take your dog to the vet, board it overnight in cage-free accommodations and bring it on holiday to a 13-acre estate in Upstate New York. The farm doubles as a training boot camp (generally about $1,800 a week) and offers a puppy kindergarten program that can take care of “all the hard training.” And of course, the playrooms have webcams so that owners can watch their dogs throughout the day. While Spot encourages deep owner involvement, especially in the training process, it’s also equipped to care for a pet with an almost total lack of it.

“We’ve had some high-profile clientele leave their dogs here for one to two months,” manager Lucas Mandell told us.

A former NFL player, Mr. Marrow spent more than a decade as a hedge funder, trying to balance his crazy work schedule and the care of his two gigantic dogs, a Saint Bernard and a bull mastiff. Not only did he see the need for more extensive care, he also saw that Americans were spending a tremendous amount of money on the things that were already out there, more than $40 billion annually. People want and love pets, but they don’t have the time to take care of them—a reality that he is happy to capitalize on.

“The kind of clients who live in luxury residential buildings have disposable incomes, and they’re willing to pay a premium to feel at ease,” Mr. Marrow explained. “I was definitely was.”

Spot’s membership is $200 annually, which guarantees space in day and overnight care and webcam access. Unlimited doggy day care costs $675 a month, and shuttle service is an additional $350. Other add-ons range from $16.20 for a half-hour group walk to an overnight in the country for $120, so that, all told, it’s easy to exceed $1,000 a month. Demand for services is growing, and a number of luxury buildings have partnered with Spot, earning a discount on the shuttle service, among other perks.

“I don’t know how people live without them,” said Bob Cohen, a TV producer whose wife works on Wall Street. A little more than a year ago, Mr. Cohen gave into the pleas of his 10-year-old son and adopted Spike, a goldendoodle. But the busy family quickly found out that even fitting in three walks a day was tough.

“We pretty much use it for everything. They even drop off food and take the dog to the vet when necessary. It’s one-stop shopping.”

But some owners have absentee guilt, which Mr. Marrow called “one of the biggest issues.” At least with his establishment, “you know you’re not being cruel to the dog,” he said. “You’re giving the dog a good life.”