Still more evidence that Twitter means business about its positioning as a media brand: In an event today at the New York Public Library, head of editorial programming Andrew Fitzgeraldannounced a Twitter Fiction Festival, a wholly virtual event that’ll run November 28 to December 2.

The goal, according to Mr. Fitzgerald, is to “push the outward bounds of what people thing of when they think of content on Twitter.”

The announcement was made at a panel, in concert with the New Yorker and organized by the serial fictioneers at Plympton, on the future of fiction. (Judging from the tote bags and hashtagged tweets, the crowd was heavy on publishing types.)

Before inviting New Yorker fiction editor Deborah Treisman to the stage to discuss the live-tweeting of Jennifer Egan’s “Black Box,” Mr. Fitzgerald gave a brief presentation, titled “Twitter is for storytelling.” Surely you can guess the theme?

Most of us default to tweets when we think about content on Twitter, but Mr. Fitzgerald wants you to reconsider. He pointed to several examples of experiments that move storytelling beyond the simple 140-character format. There was Teju Cole’s seven-part response to Kony 2012, which was essentially an essay. There are characters like @karlthefog, a baleful version of the San Francisco fog, and @MayorEmanuel, which began as a parody account and evolved into a kind of semi-dystopian, parallel-world-skipping science fiction story.

All in all, every day there are over 400 million tweets sent. That amounts to something like 80,000 novels worth of content, daily. (Some of these novels, though, are surely better than others.)

It also makes a nice complement to television programming, he pointed out. He used the illustration of Community, which carried on a kind of parallel Twitterverse plotline, as several characters live-tweeted helping someone move.

More than that, Mr. Fitzgerald argued, Twitter is a “global, realtime broadcast platform in its infancy,” and a wide-open frontier for experimentation. He really spun this metaphor out, complete with powerpoint image of the Nebraska frontier and a final call for us to get out there and pioneer some narratives. Twitter wants to “invite people to go out on this frontier and start building some structures–we’re asking all of you to go out and stake your claim and begin building the future of storytelling.”

And so the festival is an attempt to encourage even more of this. Featured will be a minimum of 10 to 12 stories, though the number might be much larger.  “We think it’s important to do this sort of experimentation, to see how far we can go with the tweet and beyond the tweet,” he explained. 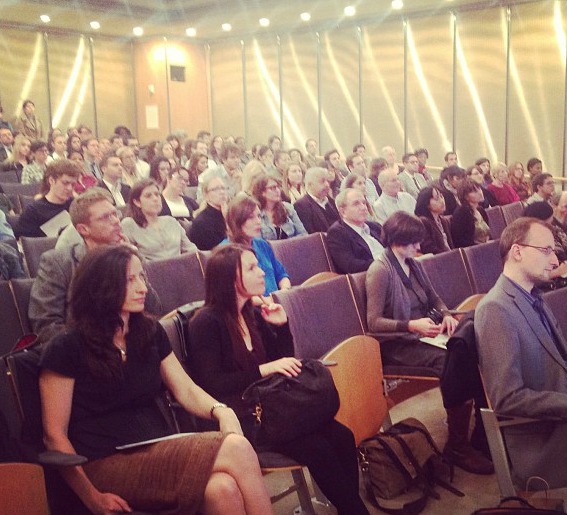