“I love the ,” Blis Laurel said this afternoon, standing beside the choppy waters of the East River. A fierce wind was blowing in across the esplanade where the East River Ferry lands—when it hasn’t been docked to wait out a possibly horrendous storm. Ms. Laurel had ventured down from her apartment on Bedford Avenue to read and reflect, to take in the scene and the energy.

“Mother Earth is so powerful,” she continued. “I love to connect with her; I wanted to come down before the storm and feel the energy. And I want come out in the storm, too, and see what that feels like.”

Ms. Laurel was wearing a white- and rainbow-colored knit cap with white tassels and a green down vest. She had a chain around her neck with a crystal hanging from it. She is from Fort Lauderdale, Fla., and thus well accustomed to the ways of a fierce storm. “Andrew was my first, when I was 3,” Ms. Laurel explained. “Hopefully I won’t be spending any time hiding in the closet again.”

Ms. Laurel said she was not afraid of the approaching Hurricane Sandy or the Frankenstorm it might manifest if the weather conditions turn out to be especially fierce, but she did know it would be something special. “It’s exciting because two celestial events are happening at once,” Ms. Laurel explained. “It’s a harvest moon and a hurricane, which I hear can mean a big storm surge. I don’t know what that would mean energetically, but I think it’s important to be with our thoughts and be in a place of love and not a place of fear.”

She was not the only one feeling the pull of Mother Earth—or Mayor Bloomberg—to this spot on the Williamsburg waterfront.

Behind us soared The Edge and North Side Piers, 30 stories of luxury condo glory, offering some of the best views of the city in the city, for those who can afford it. The condo towers are some of the biggest, some might say gaudiest, pillars of the Bloomberg administration’s physical legacy, the result of a 2005 rezoning of the waterfront to replace old factories and warehouses with these gleaming piles of apartments. Standing tall on the east side of Kent Avenue, these high-end high rises are squarely in Zone A, the first of the flood zones to be hit in the event of a severe weather event.

Not only has this corner of the city begun to resemble Miami, but it is also starting to feel like it. Memories of Hurricane Irene and the evacuation that preceded it still hang in the minds of those who call this place home, looming ominously, if so far harmlessly, like the heavy clouds blotting out the skyline. Many, drawing on the anticlimactic experience of last year, saw little reason to leave, even as a lone NYPD patrol car spent the entire afternoon circling around the base of the towers. As the same loudspeaker recording blared over and over again, it seemed like the vast majority of residents were indifferent to the pleas of Mayor Bloomberg.

This is the NYPD. You are located in Zone A, there is a mandatory evacuation in effect, and the mayor has required everyone to evacuate by 7 p.m. Anyone found to be knowingly violating this evacuation order will be charged with a class B misdemeanor.

“We’re staying,” Javier Andrede said, wearing a windbreaker as he made his way into the lobby of Northside Piers 1, his English bulldog waddling beside him. “There might be a little wind, some flooding, but I’m not worried. After the previous hurricane, I think we’ll be Okay.” Next to him, sandbags had already blocked off the revolving door, and the entrance to the neighboring Northside Piers 2 had been totally blocked off, with a hand-written sign directing residents to use the service entrance.

Mr. Andrede said hello to Zigi Liebold before making his way inside, as Ms. Liebold tried to corral her young daughter, who was dancing around, wired by all the excitement of people coming and going with the gusts, and maybe a little of that energy Ms. Laurel had been feeling. “We’re on a high floor, so we’re not very worried,” Ms. Liebold said. “We’d stay inside anyway, who wants to be outside?”

The amazing thing was, within an hour or so, Ms. Liebold, Mr. Andrede and their neighbors would have no choice but to stay cooped up inside their luxury homes. Building management was taking the mayor’s evacuation declaration very seriously, and after 7 p.m., it would be sealing up the building, turning off the elevators and letting no one in or out. Mr. Andrede said last time that lasted about 24 hours. He had just returned from walking his dog one last time, since the pooch would also be confined to the building as well. “We’re putting down lots of newspaper,” Mr. Andrede explained.

Some people were putting a positive spin on a potentially dire situation. “I’ve got a lot of work to do,” Livia Lee, who works for Lacoste and lives at The Edge said as she dashed out of her building for supplies, imploring this reporter to walk and transcribe as she went. She wanted to get to the store before the last of the supplies ran out.

“I just got these kick-ass new stereo speakers and I am going to listen to those until the power runs out,” Jim Butler, another Edge resident, said, tugging on the doors of the CVS that is part of the complex—it had just closed a few minutes before 5 p.m. “Then I’m going to read and look at my art books. I’ll live by candlelight, get in touch with my 19th century self.” 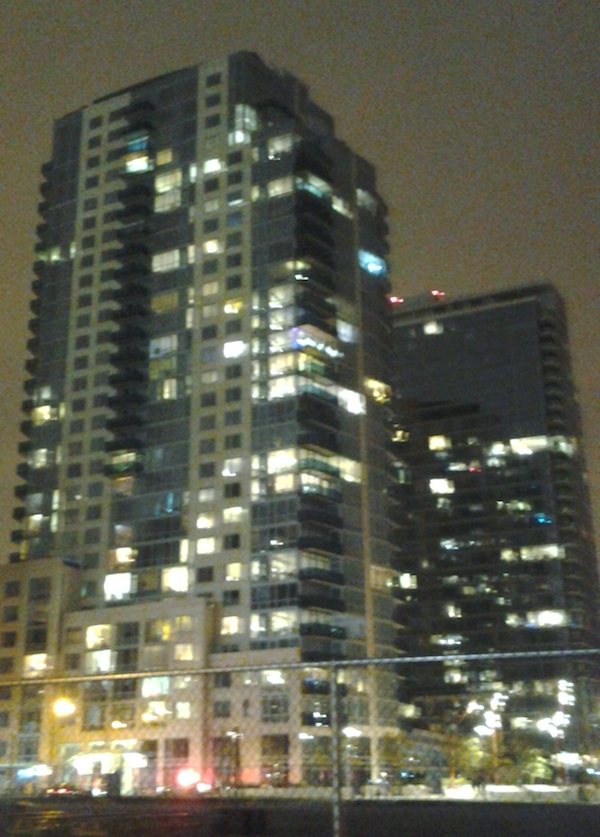