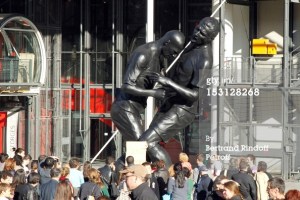 French artist Adel Abdessemed has made a giant bronze sculpture depicting the infamous moment during the 2006 World Cup when the French captain Zinédine Zidane head butt Italian defender Marco Materazzi in the chest. The 18-foot-tall statue, called Coup de Tête, is installed in the courtyard of Paris’s Pompidou Center, where Mr. Abdessemed is currently the subject of a retrospective.

According to an interview in The New York Times‘ ArtsBeat blog:

Mr. Abdessemed, who holds both French and Algerian citizenship, spoke reverently of the head butt. “Zidane, that day, offered us a rapture,” he said, flicking cigarette ashes onto the floor of his Paris studio office. “He expressed himself as a man.”

Mr. Zidane is a popular muse: he is also the subject of a 2006 film by artists Douglas Gordon and Philippe Parreno called Zidane: A 21st Century Portrait.