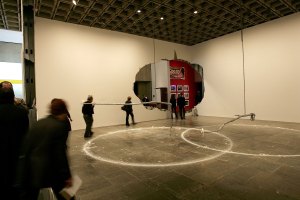 Work by Urs Fischer at the 2006 Whitney Biennial. (Getty Images)

Carol Vogel of The New York Times has a big scoop on the 2014 Whitney Biennial, revealing in her Inside Art column today that three curators will organize the show, each taking a floor of the Whitney’s Breuer Building. Those lucky curators are Stuart Comer, the Tate Modern’s film curator; Anthony Elms, associate curator at the ICA Philadelphia; and Michelle Grabner, an artist who chairs the School of the Art Institute of Chicago painting and drawing department.

Elisabeth Sussman and Jay Sanders, who helmed this year’s edition of the biennial, will serve as advisers on the project.

The Whitney’s chief curator, Donna De Salvo, told The Times, “By slicing the museum up like a layer cake and seeing how it will look collectively, it gives the curators the opportunity to express their own points of view, each on a different floor.”

The last time the biennial had three curators was 2004, when Chrissie Iles, Shamim M. Momin and Debra Singer were in charge. The last four editions of the biennial have been organized by duos.