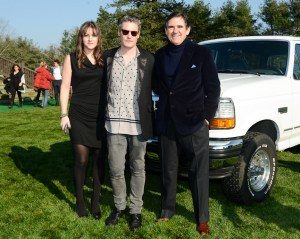 Though Instagram is a new enough medium that nobody has ever used it to photograph any actual murders (probably), the cheery photo app gained a darker filter Sunday afternoon at the Brant Foundation’s new Nate Lowman exhibition, which featured, just outside its main building in Greenwich, Conn., the very white Ford Bronco that O.J. Simpson used for his low-speed chase in 1994, a car that everyone immediately felt the need to Instagram. As soon as the art-world dons began to trickle in, the foundation’s hashtag began to fill with Kodachrome-y shots of the vehicle, looking very white and very unlike (maybe) homicide memorabilia in the sun. Perhaps the best shot featured one of Peter Brant’s sons standing before the vehicle in leather pants, with the caption “When Harry Met O.J.”

It was all very Bret Easton Ellis. The iPhone paparazzi seemed right for the vehicle, which Mr. Brant called “the most filmed car in the history of American television.”He’d paid the Bronco’s owner $15,000 for the privilege of having it on his lawn. (For comparison, he reportedly pays $75,000 annually to maintain the hundreds of flowers on his Jeff Koons Puppy sculpture across the street.) “The guy wanted to sell it for a million,” Mr. Brant told onlookers, “but I told him it was for an art project, so I wasn’t going to do that.” The foundation kept it in one of their barns during Hurricane Sandy.

Mr. Lowman, who is 33 and grew up near Palm Springs, Calif., confessed a long personal relationship with the trial, one that was certainly shared by the Los Angeles contingent in attendance. L.A. dealer Perry Rubenstein had a shot taken as he tried to push the car like Sisyphus. He’d been in Switzerland, for Basel, drinking at the time of the chase itself, and he caught it in his hotel room, transfixed in the early hours there. “I couldn’t believe what I was seeing,” he said.

“O.J. confessed to me, you know,” said the writer Anthony Haden-Guest. “I did a piece for Details where he told me, ‘Anyone is capable of doing something that can change their lives forever.’ I kept saying, ‘Look! Look!’ but nobody paid attention.”

Eli Broad, a trustee at the Museum of Contemporary Art, Los Angeles, lives five blocks from where the murder took place. “You had to show your ID just to get onto the block, it was a nightmare,” he said. He then excused himself, gesturing to the psychedelic dance music coming from the nearby tent courtesy of Gang Gang Dance. “They’re playing my song.”

That performance featured a man in a purple jumpsuit and a burka stomping around a scarf. The art, though, was slightly less weird. It began with a room of Mr. Lowman’s contemporaries, Josh Smith, Dan Colen and Leo Fitzpatrick among them, then moved to a series of Marilyn Monroe portraits, a near perfect blend of Andy Warhol and Willem de Kooning in that they both were both bright and ugly. Next there were some paintings based on photos and, on the lower level, a giant wall of paintings shaped like, respectively, cartoon bullet holes, those evergreen tree–shaped air fresheners that hang in hack cabs and a pizza. Most are done in Roy Lichtenstein–like benday dots.

“You just get such a better sense of him, with a show like this,” said L.A. MOCA Director Jeffrey Deitch, standing in front of an air freshener, “than you would with any single gallery show.”

Outside, the artist Urs Fischer, who had his own show at the foundation in 2010, posed for a photographer with his young daughter and then tried to convince her to eat something in the tent.

“I don’t want to eat!” she protested from his shoulders.

“Eating’s the best thing!” the photographer assured her.

“How about we go to the tent,” Mr. Fischer said, heading in that direction, “And then we start with dessert, and we go slowly, slowly, slowly to the main course, hm?”