As we sloshed, caked with snow flurries, into the Mandarin Oriental for the 2012 Phoenix House Fashion award dinner last Wednesday evening, we couldn’t determine whether it was the way-too-early winter outside, the Sandy-forced relocation or the early start after an endless election season, but at first glance, things looked a bit quiet. (In retrospect, we appreciated the venue upgrade, considering it was originally slated to take place at Pier 60.)

“Well there’s Linda Fargo, at least …” we uttered to a weary-eyed publicist as she sashayed passed us in a crisp black sheath dress, before we sauntered downstairs to cocktail hour.

Below, on the 35th floor, the considerably more lively and notable fashion crowd imbibed, heedless of the blizzard-like winds that howled without mercy on the commoners struggling to get around Columbus Circle.

With the exception of Glenda Bailey, this didn’t feel like a typical fashion event; nay, it was considerably more corporate—a bit cliquey, but not necessarily in a bad way. Dashing executives (well mostly dashing) in flamboyant tailored suits sipped scotch and red wine, while a more demure population of women squawked about recent highs and lows.

This reeked of powerful retail and media industry figures rather than overcompensated stylists and over-photographed fashion mavens.

The Observer wasn’t feeling particularly social, but we decided to meander aimlessly about the lobby, gorging ourselves with vegetable spring rolls every time they passed.

Eventually, someone had the brilliance to ring the dinner gong and get the show on the road.

“You’re stuck with me,” laughed Rose Marie Bravo, the fashion branding and commerce star, as she welcomed the Phoenix House patrons now enjoying their first plating around candlelit tables. She apologized for emcee Ali Wentworth, who was “lost somewhere in the city.”

“This past week has been a tragic one,” she continued. “Many of our friends have been left homeless or without power.” She went on to explain what Phoenix House does: it helps thousands of people struggling with substance abuse and addiction through its pioneering treatment program. For a second or two, The Observer stopped sipping. But only a second or two.

Seated before us was honoree Jim Gold, president of The Neiman Marcus Group; Tory Burch, evasive and on high alert with her pending lawsuit against ex-husband Chris Burch still ablaze; and Calvin Klein’s Francisco Costa. The weather was most likely to blame for the empty seats, and there was substantial mention of Hurricane Sandy and its affect on the Phoenix House community.

He was followed by a young client of Phoenix House, who spoke of his history with drug abuse, dealing and violence. It was simple, honest and very effective. He said he is now rightly on track, working toward a degree in social work.

“Drug abuse can happen to anyone’s child,” said Mr. Meithner, then diving into the politics and ethos of the drug culture in America.

“But recovery is achievable and sustainable,” he concluded, just as Ali Wentworth, our long-lost emcee, finally stampeded in.

“I’ve got a husband who said, ‘I’ve just done 36 hours of ABC election coverage! You’re gonna get into bed with me!’” she blurted to our disbelief, about her hubby, George Stephanopoulos.

Yes, ladies and gentlemen, not only was the fabulous hostess late because she was having a roll in the hay, she announced it to us all! Our kind of gal. And poor George, election aside, he must have still been shell-shocked by his co-host’s odd drunken-like behavior on election night—Cheers, Diane!

“They messengered this to me,” Ms. Wentworth continued, exposing a shiny Olivier Theyskens for Theory blazer that kept her décolletage in check.

“I thought I was chic, but maybe I’m just a shoplifter!”

We decided right then and there that we all wanted to leave and go home with Ali Wentworth.

Our hostess extraordinaire thankfully kept the pace brisk as we cruised into the awards segment. Monsieur Theyskens gave a poignant and astute speech before plopping a Phoenix House award in the hands of Andrew Rosen. The CEO of Theory then delivered a heartfelt personal story of his own family’s struggle with addiction and praised the Phoenix House for its wonderful work.

Tina Brown, editor in chief of Newsweek/The Daily Beast, made an anticipated handoff to Diane von Furstenberg. We never got to pester her with our gossipy questions about her publication’s demise.

Once DvF accept her award, she dove into a tale of how she first met Phoenix House Founder Mitchell S. Rosenthal. Apparently Ms. von Furstenberg had mistaken the addiction innovator for ’80s star Chris Sarandon, whom she mistakenly referred to as Chris Rock. “He was hot,” she said.

“Then I got to know more about Mitch Rosenthal. I’ll spare you the details …”

The romantic jaunts of the fashion queen brought the crowd great delight.

“This young, smashing man who looked like Chris Sarandon—created this place where shame was not an issue,” Ms. von Furstenberg gushed.

“I really want to make sure that we all raise our glass to this special man!”

At that flawless declaration, we lifted our glass, emptied it, and dashed downtown, to partake in rowdier action at Le Baron—alas, without Ali Wentworth. 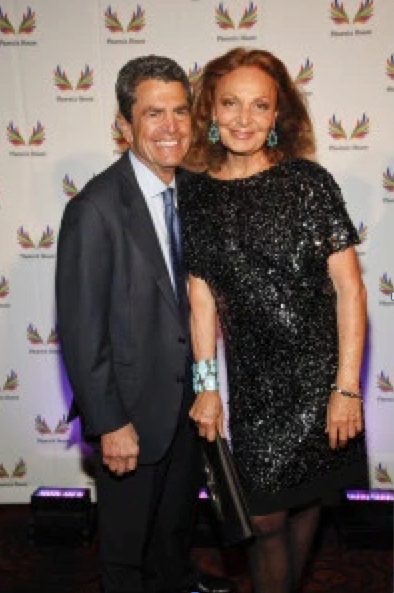