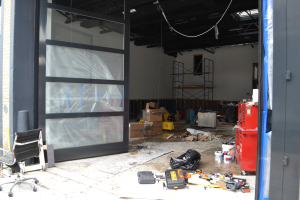 Immediately following Hurricane Sandy, art insurer AXA was hesitant to put a value on the damage to art for its 300 clients in Chelsea and Lower Manhattan. Now, in a press release, President and CEO Christiane Fischer has said “our estimated losses in Chelsea stand at $40 million.”

This estimate follows the organization’s checking in with all its clients and evaluating the conservation work that could be done on the pieces that water had touched. Given that AXA insures some $1 billion of art in Chelsea alone, the neighborhood seems to have indeed dodged a bullet, not that that’s any consolation to those who did lose art.

In the release, Ms. Fischer went on to say, “The magnitude of the situation is completely manageable for AXA Art and we were totally prepared to handle such a challenge. Fortunately, our clients took a lot of preventative action before the storm hit the region. In addition, AXA Art was able to start the recovery actions as early as the morning after the storm.”

Total losses in Chelsea are likely far higher than that $40 million figure since some galleries were covered by insurers other than AXA and still others were not insured against flood damage at all.

Rebuilding efforts in Chelsea are well underway, and Friday saw a good number of openings there. How the art loss will affect the neighborhood remains to be seen.