Union County Democratic Party senators Ray Lesniak (D-20) and Nick Scutari (D-22) want a Cory Booker candidacy and are convinced he would give Democrats the best shot at 2013 statewide victory. But if Booker doesn’t run, they both back Elizabeth Mayor Christian Bollwage.

“I think he’d be an excellent governor,” Scutari (pictured) said of Bollwage.”He has an excellent track record as mayor and as the leader of an urban city. He plays well to the Democratic Party base.”

Unlike the ubiquitous and financially well-connected Booker, money and lack of name ID outside Union County remain challenges for Bollwage.

“I don’t know about the best candidate,” Scutari said when PolitickerNJ.com prodded the senator on Bollwage’s viability. “I think he’d be one of the best governors.”

Lesniak too said he is prepared to back a Bollwage run in the event Booker doesn’t run.

“He’s a grit mayor who has real grit and determination,” Lesniak said of his longtime ally. 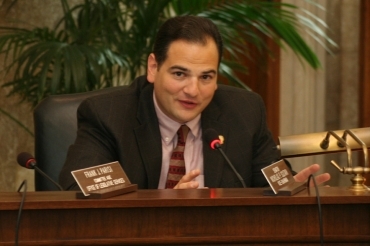