NEWARK – They had an alliance once and a friendship born of street battles fought together as the city’s new political tide.

But West Ward Councilman Ronald C. Rice tonight sees Mayor Cory Booker as an emblem of an old guard establishment he thought they had sworn to defeat.

“I never thought the guy I suppported would ever take a dump on the democratic process,” said Rice (pictured). “Whatever differences we ever had, I never thought he would throw the baby out with the bathwater.”

Booker’s actions tonight at the Newark City Councill meeting and the resulting violent backlash came, inopportunely for the mayor, amid ongoing buzz concerning his potential for a statewide 2013 run at incumbent Gov. Chris Christie.

He plans to make an announcement about his plans by the middle of next month.

Many Democrats see the national-sized Booker – the only New Jersey Democrat with a speaking role at the Democratic National Convention – as the sole candidate who can compete against Christie.

But “he gets nowhere with a divided Newark,” said Rice, a much buzzed about Booker successor as the city’s chief executive. “These kinds of actions divide Newark.”

For their part, Booker’s allies see the councilman on the rebound from a pancaked 10th District Congressional bid in the arms of his own hellish compromise: the octopus embrace of former Mayor Sharpe James and company, hardly the refuge of someone proclaiming good soldier reformer credit.

“She’s a woman,” argued Adubato, pointing out that she’s now the only woman on the council until the city holds a special election next year.

Sources told PolitickerNJ.com they support John Sharpe James, son of former Mayor James – on grounds that he received the most votes in a 2010 losing efffort for an at-large council seat.

Alert to a James family return to City Hall and in attendance tonight just days after Payne vacated his at-large council seat and within a 30-day window to fill the vacancy, Booker rose and cast his vote for Speight.

“The way the rule works is if there is a candidate and there is a tie, the mayor can be tiebreaker,” said Booker’s Chief of Staff Mo Butler. “We did our research; we looked up the statute.”

But Rice didn’t attend the council meeting, and as such did not contribute to a 4-4 deadlock – by statute the only way the mayor could assert his tiebreaking function, Rice argued.

“They’re wrong on legal grounds,” said the councilman, son of state Sen. Ronald L. Rice (D-28). “They don’t have a leg to stand on. The statute is the mayor can only vote if there’s a 4-4 tie. I stayed away from the council meeting. I had some intel they were going to try something like this, and I stayed away from it. I thought if it came to a tiebreaker by not being there even if we couldn’t agree on a candidate it would give us more time to deliberate.”

Booker voted anyway in “a slap at democracy,” Rice said, though Butler poitned out that case precedent doesn’t favor elected offficials intentionally ducking a meeting to avoid the creation of a tie.

As reported by the Star-Ledger, the mayor’s vote prompted a rush of the council by residents attending the council meeting, and the arrest of labor leader Rahaman Muhammad, who allegedly caused Speight to stumble backwards.

“She hurt herself,” said Ramos. “No one did anything intentional but that was an atmosphere we cannot support. It’s unfortunate things disintegrated the way they did.”

The North Ward councilman, a likely 2014 candidate for mayor, described Speight as a solid and qualified candidate for the vacant seat.

“I’m not suprised the mayor came in to play Solomon at the end because the mayor wants to be governor and wants to stay on the good side of the Adubatos of the world,” he said.

“He likes to talk about ‘Street Fight,'” he added of the documentary about their 2002 citywide run against the entrenched powers of Sharpe James. “He ought to go watch ‘Street Fight.’ Ms. Speight never asked me for my support, although I represent one fifth of this city as councilman of the West Ward. John James sent a letter to council members requesting support. Even the way she went about it smacks of machinism. I am appalled the mayor chose to go against his better angels.”

A Machiavellian move at City Hall – very likely – but Butler reminded Rice the object of the young idealists’ fervor in “Street Fight” was named James.

Still, the sound of cops and citizens clashing at City Hall was hardly the solemn drum roll Booker’s allies wanted leading up to the mayor’s announcement about his future plans, as a poll landed showing incumbent Gov. Chris Christie’s approval rating at 65%. 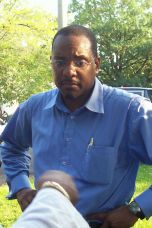