What do you think about when you hear the word “Brazil”? Does it conjure up pictures of beautiful beaches, buxom models, and tropical drinks? Or does your mind immediately go to darker places: Terry Gilliam’s nightmarish visions of bureaucracy gone mad, the slums of Rio de Janeiro, the torture of a Brazilian wax, or poor Eduardo Saverin?

Because, let’s face it, Brazil can kind of be a scary place. Especially since the country’s version of Candid Camera apparently involves terrifying the every-loving shit out of hapless victims who use their elevators, as exemplified in this YouTube video that has been making the rounds?

Those poor people. That poor girl! As Rex Sorgatz wrote on VIEWSOURCE, “That little girl is lucky no one punched her.” Also “Why are Brazilians so cruel?”

Over 64 percent of Brazilians are Roman Catholic, which is definitely not the religious mindset you want to be screwing with when you put Linda Blair Jr. in a metal cage with someone and shut off the lights. The power of Christ compels you…to push the emergency button and pry the doors open with your teeth. 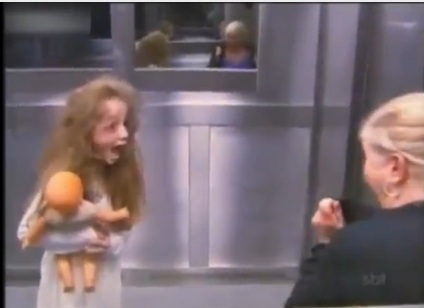