When state Sen. Joe Kyrillos jumped into the race for a U.S. Senate seat, many Republicans were skeptical of the move owing to a difficult year for the GOP with President Obama expected to win the state handily.

Why go out now, some in the GOP reasoned, when he stood little chance to win and every chance to lose big.

Now, both pundits and senior members of the party say Kyrillos’ 19-point loss to incumbent Democratic U.S. Sen. Bob Menendez has all but quashed any future statewide viability.

“He ran a poor campaign that neither introduced him to the voters as a future statewide candidate nor did it engender any affection from statewide Republican leaders who were looking for a strong showing that would help them down ballot.  I don’t think there is anyone in Republican leadership right now that thinks they owe Joe Kyrillos anything,” said Monmouth University pollster and political science professor Patrick Murray.

There is another Senate seat up two years from now and the possibility exists that its owner, Sen. Frank Lautenberg, may choose not to run, leaving a dogfight in his wake.

A statewide run is a coveted chance, said Montclair State political Science Professor Brigid Harrison. There is a stable full of Republican legislators who would like the shot, she said, so why would the GOP choose one who didn’t come close.

“His campaign never really gained any traction and he was never able to separate himself from Menendez,” Harrison said.  “I think he would be hard pressed to say he deserved a second chance.”

Kyrillos, who will remain in the state Senate and is up for election next year, is not without sympathy from party leaders who say Hurricane Sandy stole any potential for news coverage over the final week of the race and Kyrillos’ bases in Monmouth and Ocean Counties were among the hardest hit by the storm.  Obama’s strong showing in the state and the love fest between the governor and the president that played out days before the election also didn’t help, they admit.

But they also point out that Tom Kean Jr. , who opposed Menendez in 2006, also ran in a tough year for Republicans and lost his race by nine points.  In the process, Kean raised $6.2 million ($7.1 million when adjusted for inflation), to about $5 million for Kyrillos, albeit in a non-presidential year when donor dollars are more available.

“I think there is certainly no shame in losing a statewide race in New Jersey, as a matter of fact it’s been the springboard for several people who eventually won,”  said one senior Republican strategist. “But I think the size of the loss is problematic. Some of that is out of his control. The news was sucked up by the hurricane but there are also some people who ran in bad years and did a lot better.”

However, one prominent state Republican disagreed that Kyrillos is finished on a statewide level, saying the factors that led to the wide margin were beyond his control. What’s more, his ability to raise money will make him tough in any primary.

“Joe ran a strong race but ran into factors outside his control,” said GOP National Committeeman Bill Palatucci.  “The storm hitting the Monmouth/Ocean region particularly disadvantaged the Kyrillos campaign since that is his base.  Joe has a great future.” 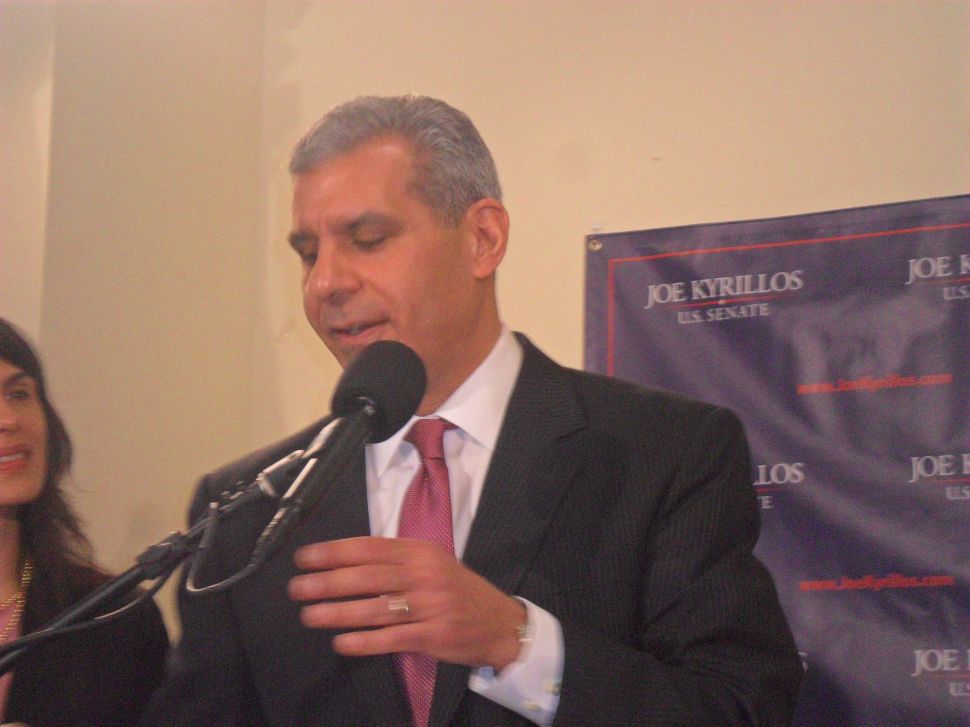