WAYNE – If you don’t reside next to a hospital, you know there’s probably an issue when your next door neighbor takes a cigarette break in a surgical mask and apron.

But a bunch of alleged drug dealers rounded up in the last number of hours were trying to be secretive about their trade, he said, operating several “mills” in Paterson.

These are not your grandfathers’ Paterson mills, mind you.

“They’re mills because they define the activity more than the structures,” Chiesa explained.

Following a six-month investigation by the AG’s Office in conjunction with the Passaic County Sheriff’s Office, Chiesa today announced the arrests of the alleged ringleader and 14 other defendants connected to a major heroin network out of Paterson.

“Drug-dealing is at the heart of the crime and violence plaguing Paterson and our other cities,” said Chiesa, leader of the investigation that seized $255,000 in cash in the takedown.

Last week, on Nov. 13 and 14, a multi-agency force, led by the Division of Criminal Justice, was deployed in Paterson and Prospect Park to arrest the alleged drug suppliers and raid their heroin processing and stash houses, according to a release by the AG.

Detectives searched 10 residences and one vehicle in the investigation, seizing three kilos of bulk heroin, another kilo of heroin packaged in thousands of glassine envelopes for individual sale, and about $255,000 in cash.  The bulk heroin has a “wholesale” value of more than $300,000, and could have sold for in excess of $1 million once cut and individually packaged for sale on the street. The drug network is believed to have supplied multiple kilos of heroin per week to other suppliers and large-scale dealers.  They did not generally sell to street-level dealers.  The ring allegedly distributed heroin to dealers in northern New Jersey, New York, Pennsylvania and Washington, D.C.

“We will continue to pursue these proactive, multi-agency investigations that take aim at the ringleaders and the main sources of narcotics, not just street-level dealers,” Chiesa said.

“We allege that these drug suppliers operated multiple stash houses around Paterson, as well as heroin mills where they cut the heroin and packaged it into bricks – bundles of about 50 ten-dollar glassine envelopes or ‘bags’ of heroin, ready for distribution on the streets of our cities,” said Director Taylor of the Division of Criminal Justice. “In addition to the three kilos of bulk heroin we seized, we seized nearly 500 bricks of heroin, each with a street value of several hundred dollars.”

“This was a true multi-agency operation,” said Passaic County Sheriff Berdnik. “I commend the Attorney General for the coordination his office provided in making these arrests possible. I feel strongly that the only way to truly reduce narcotics trafficking and street crime is by arresting the individuals involved in creating and implementing the distribution network. This operation will certainly go a long way in reducing drug trafficking in Passaic County.”

“This investigation dismantled the Segundo Garcia heroin trafficking organization operating in New York and New Jersey,” said Special Agent in Charge Crowell of the DEA New York Division. “Heroin trafficking organizations are the primary threat to our region and are fueled by the diversion of pain medicine. The tenacity of investigators assigned to this task force has prevented hundreds of thousands of glassines from being distributed to our communities throughout the region. I highly commend the task force team for their efforts on behalf of the public they are sworn to serve. They completely dismantled multiple heroin mills and removed the dangerous threat of alleged significant drug traffickers from our community.”

Investigators seized 1.5 kilos of heroin, a kilo of cocaine, and packaging materials and equipment from an alleged heroin mill located on the first floor of 447 East 21st Street in Paterson.  The cocaine has a street value of approximately $35,000. They seized an additional 1.5 kilos of heroin and $220,000 in cash from a second mill located on the first floor of 246 Maryland Avenue in Paterson.  Workers clad in aprons and surgical masks allegedly worked at these and other locations to cut, process and package heroin for the network.

Garcia, a Dominican national, served more than five years in federal prison for drug dealing beginning in 2000.  He was subsequently deported by federal immigration authorities, but re-entered the U.S. illegally and allegedly established his large-scale heroin distribution network in Paterson.  A second man, Wilfredo “Willie” Morel, 39, of Paterson, allegedly worked with Garcia to obtain large quantities of heroin and also exercised independent leadership control over other members of the supply network.  He was charged with second-degree conspiracy to distribute heroin.

Three of the defendants arrested allegedly served as “middle managers” for the heroin supply network under Garcia and Morel, helping direct the payment of monies and re-supplying of heroin to the wholesalers. They were charged as follows:

Five defendants allegedly served as lower-level managers and suppliers.  They were charged as follows:

Cox and Keeling were arrested on Oct. 11 on Route 80 when investigators stopped the Dodge Caravan in which they were traveling.  Execution of a search warrant revealed 425 bricks of heroin in the van.  Another 65 bricks of heroin were seized last week in a search of Minaya’s house on Danforth Avenue.

The other seven defendants who have been arrested or are being sought on warrants were alleged workers in the supply network who were involved in processing, packaging and transporting heroin.  They were charged as follows:

Almonte and Flores are taxi drivers who allegedly transported members of the network and heroin to and from the various locations used by the criminal enterprise.

The investigation was conducted for the New Jersey Division of Criminal Justice by Detective Travis Johnson, who was the lead detective, and other members of the Gangs & Organized Crime Bureau, under the supervision of Lt. Christopher Donohue, Sgt. Ho Chul Shin, Deputy Attorney General Annmarie Taggart and Deputy Attorney General Lauren Scarpa-Yfantis, who is Deputy Bureau Chief.

The arrested individuals were lodged in the Passaic County Jail.  Bail for Garcia was set at $350,000 cash, with a bail source hearing required.  Cash bails were set for the other defendants ranging from $125,000 to $250,000, with bail source hearings required in every case. 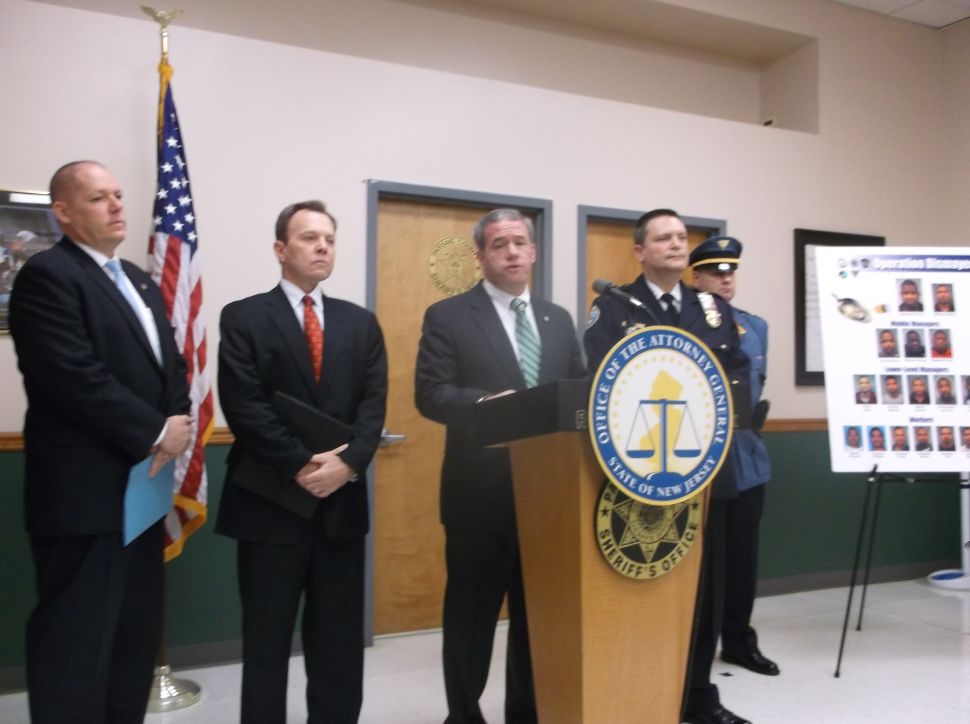