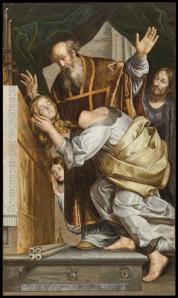 At its sale “500 Years: Decorative Arts Europe” sale on Nov. 29, Christie’s will present a mosaic depicting Saints Valeria and Martial, which was housed at the Altar of Saint Joseph in St. Peter’s Basilica of the Vatican from 1895 to 1963.

The work is for sale at an estimated price between $200,000 and $300,000. It stands 11 feet tall and is credited to Salvatore Nobili, the head of the Vatican Mosaic Studio in the late 19th century.