Former four-star general and current director of the CIA David Petraeus has tendered his resignation to the president. Wire services are still sorting out the details, however NBC is reporting that Mr. Petraeus resigned due to an extramarital affair.

Mr. Petraeus, once touted as a potential candidate for president, played a crucial role in the Iraq war prior to resigning his Army commission to head the Central Intelligence Agency. Republicans and Democrats alike were pleased with his appointment, unanimously approving the choice.

Only the attack on the U.S. Embassy in Benghazi, which has been viewed by some as an intelligence failure, called his leadership into question.

From the White House, President Obama’s statement on the resignation:

David Petraeus has provided extraordinary service to the United States for decades. By any measure, he was one of the outstanding General officers of his generation, helping our military adapt to new challenges, and leading our men and women in uniform through a remarkable period of service in Iraq and Afghanistan, where he helped our nation put those wars on a path to a responsible end. As Director of the Central Intelligence Agency, he has continued to serve with characteristic intellectual rigor, dedication, and patriotism. By any measure, through his lifetime of service David Petraeus has made our country safer and stronger.

Today, I accepted his resignation as Director of the Central Intelligence Agency. I am completely confident that the CIA will continue to thrive and carry out its essential mission, and I have the utmost confidence in Acting Director Michael Morell and the men and women of the CIA who work every day to keep our nation safe. Going forward, my thoughts and prayers are with Dave and Holly Petraeus, who has done so much to help military families through her own work. I
wish them the very best at this difficult time.

Rumors reported via social media that Mr. Petraeus had an affair with an aide to Massachusetts Senator-elect Elizabeth Warren were false.

Mr. Petraeus may have had no choice but to resign. New York Magazine noted a Reuters report regarding rules of conduct for CIA employees in which an agency spokeswoman said, “CIA employees must take – and pass – a polygraph test as part of the process to receive a security clearance, and must regularly undergo reinvestigations to maintain that clearance.”

Earlier this month, Newsweek published “General David Petraeus’s Rules for Living.” Rule number five: “We all will make mistakes. The key is to recognize them and admit them, to learn from them, and to take off the rear­ view mirrors—drive on and avoid making them again.” 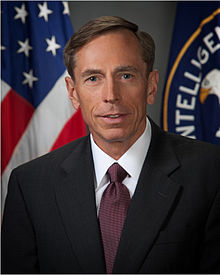