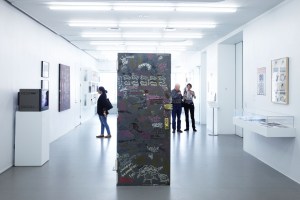 The most prominent item in “Come Closer: Art Around the Bowery, 1969-1989,” on view at the New Museum now through Dec. 30, is the door to Keith Haring’s loft at 325 Broome Street. The front of the door is painted bright red, except for one dull patch where painters have preserved a trademark Radiant Baby. The back boasts tags from Haring as well as his graffiti-writing houseguests: Futura 2000, Fab Five Freddy, Kenny Scharf and LA2.

The door comes courtesy of landlord Saul Fried, who attained it through luck, according to the art historian Marc H. Miller, whose archival website, 98bowery.com, takes its name from his former address and forms the backbone for the show.

“He’s kind of an Old World Jew,” Mr. Miller said of Mr. Fried, his own former landlord. “He was always just a little suspicious. Even though he’d been renting to artists for all these years, unlike some landlords he’s never really let any pay their rent with art.” Not that this mattered, since Mr. Haring was subletting anyway. “So ironically he ends up with a Keith Haring door… he doesn’t even have Keith’s name on the lease!”

Haring’s inscription, marking the artist’s studio to any passerby, is but one work that, in the words of exhibition curator Ethan Swan, “either brings the Bowery into the studio or extends the studio out into the Bowery.” In the former category are Martin Wong’s painting of a nearby tenement and Eve Sonneman’s photograph Spring Street Girls. In the latter are Charles Simonds’s miniature “Dwellings” sculptures and Christy Rupp’s Rat Patrol posters, both, originally, surreptitiously installed throughout the streets.

“It wasn’t like you were gonna put up a painting and then sell it for $80,000,” said Mr. Miller, “so artists were first of all looking for an audience.”

In 2008, Mr. Swan interviewed Mr. Miller for the Bowery Artists Tribute, the oral history project he runs under the museum’s aegis. At the time Mr. Miller was just beginning to build his website. “I guess there’s a little bit of a chicken and egg thing here,” says Mr. Miller, “because I was just in the process of beginning to put it together and then I found myself talking on the tape here.” Meanwhile, Mr. Swan credits Mr. Miller with the inspiration for turning the project into a museum show.

“I had never really thought of the Bowery Artists Tribute as being able to really communicate through art objects, because I think it’s more about the stories,” Mr. Swan said, “Less about what was made and more about how the neighborhood facilitated that. And it was actually Marc’s website that first made me think that those objects could be used to tell that story.”

The Bowery Artists Tribute was started when the museum moved in 2007. The point was, as Mr. Swan puts it, “to point out that the museum isn’t here to establish an arts district or create something new but actually is entering into a very long story.” (Or as Mr. Miller puts it: “to inoculate the museum from charges of gentrification.”) The history it documents begins with the 1955 demolition of the Third Avenue elevated train, whose absence allowed adequate light into the nearby lofts for Abstract Expressionists to set up studios.

“By 1957, John Opper and Mark Rothko are in this building across the street, 222 Bowery, and Lichtenstein was down the street at 190,” Mr. Swan explained, speaking at the museum. “This idea of these men that need these wide open spaces to make their giant paintings, I think it’s such a really incredible story that I’m really interested in, but I do think part of what stands out to me about the ’70s and ’80s is the artists during those times didn’t need space or light in the same way. The relationship with those key elements of the Bowery, at least that initial wave, is much murkier. The show is an opportunity to look more in-depth at why artists continued to come to the Bowery during those decades when it’s not as clear-cut a story.”

The dates of the show are also those of Mr. Miller’s residence on the Bowery. A graduate of the University of California at Riverside (where his classmates included poet Billy Collins), Mr. Miller moved to New York to pursue a Ph.D. and NYU’s Institute of Fine Arts, but his encounters with his roommates’ works (five of Come Closer’s 20 artists lived at 98 Bowery at one time or another) inspired him to produce art of his own. Included in “Come Closer” is Harry Mason, Harry’s Bar, 98 Bowery, NYC (1974), a series of photographs by Mr. Miller depicting a day in the life of a local barman, who annotated each by hand in all-caps (sample text: “I AM RINGING UP A SALE ON MY REGISTAR [sic]”). Also in the show are “paparazzi self-portraits” that depict Mr. Miller and collaborator Bettie Ringma posing with ’70s celebs like Andy Warhol, George McGovern and the Ramones.

Those punk legends are heavily represented, with drawings by Joey and Dee Dee and T-shirts designed by Arturo Vega, who shared his Second Street loft with the musicians. There are also flyers for shows by the likes of E.S.G., Liquid Liquid and Jean-Michel Basquiat’s band Gray. The show’s public programming includes a performance on Nov. 30 by Arto Lindsay of DNA and a panel on Dec. 13 called “Parallel Lines: Visual Art, CBGB and Downtown Nightlife.”

Mr. Swan—who himself played in the band Silk Flowers—cited Arleen Schloss’s performance salon, A’s, as an example of the way artists of different media used to interact.

“On one night it could be a slide show film, a band playing, somebody doing performance, a Xerox flyer show—you know, like people making Xerox art, and then they’d be taped up to the wall for one night,” Mr. Swan said. “The Coachmen, which was Thurston Moore’s band before Sonic Youth, played all their first shows there. Gray played their first show there. Because it was so informal and because it was a little bit off the beaten path and because none of the neighbors were ever gonna complain about noise, it was a place where a lot of artists were able to get their start with performance because there was just no parameters of what could happen there. [Ms. Schloss] really wanted to let anything that wanted to happen there happen there.” An 8mm film in the exhibition shows Ms. Schloss postering in the area.

It’s difficult to compare the Bowery of 2012 with that depicted in “Come Closer.” There’s a “certain romanticizing of an artist community in the midst of that kind of decay,” Mr. Miller said, and compared the neighborhood to 19th-century Montmartre. The galleries that blossomed around the New Museum in the past few years are more hidebound than 5 Bleecker, and few of their artists work in the area. Just this week, Sperone Westwater opposed the construction of a highrise hotel just behind the gallery, which is just down the block from the museum.

“An artist who’s coming to this neighborhood now,” Mr. Swan said, “a young artist, is gonna have a much different relationship with why they’re here or what’s happening here.”

Tomorrow at 7 p.m. the New Museum will present a performance by Arto Lindsay of DNA.