The campaign of Republican congressional candidate Christopher Wight believes there was a conspiracy behind the endorsement of his Democratic rival, Carolyn Maloney, in the local Our Town newspaper (also known as the N.Y. Press). Nick Mackey, a spokesman for Mr. Wight, sent out a statement entitled ”’Our Town’ Newspaper Sells Endorsement to Maloney” this weekend detailing the campaign’s belief the paper traded its endorsement for ad sales.

“Kate Walsh of the New York Press (Our Town newspaper) sales department recently informed Christopher Wight’s campaign that Carolyn Maloney had spent over $10,000 on ad buys in their newspapers during this election cycle and encouraged Mr. Wight to do the same,” Mr. Mackey wrote. “In addition, Ms. Walsh coordinated the October 26, 2012 endorsement interview between Mr. Wight and newspaper’s editors. During several conversations with campaign staff to arrange the endorsement interview, Ms. Walsh strongly encouraged the campaign to purchase ad space in the online and print editions of the newspaper.”

Our Town is published by Manhattan Media LLC and the company’s CEO, Tom Allon is running as a Republican in next year’s mayoral election. Mr. Allon referred questions about this story to the company’s chairman, Richard Burns, who vehemently denied his paper engages in “pay for play” and said it would be “irresponsible” to “run a story based on a press release of a disgruntled political operative casting libelous aspersions.”

“I want to be quite clear: there is no pay for play in the Manhattan Newspaper Group’s political endorsement process,” Mr. Burns said. “The editorial teams at Manhattan Media are in no way influenced by business people or ad buys in determining which candidates receive our endorsements. As you know, these endorsements are widely acknowledged as highly influential in local races, a reputation of which we are extremely protective.”

“Earlier this year, Mr. Wight accepted an invitation to the publication’s midtown offices for an interview with Megan Finnegan Bungeroth. Upon arrival, Mr. Wight was first guided through the ad sales department and given a lengthy sales pitch on buying ad space before being interviewed by Ms. Bungeroth,” wrote Mr. Mackey. “Subsequently, in the publication’s July 5, 2012 issue, Mr. Wight appeared on the front page accompanied by a positive article highlighting his platform and ideas. The Wight campaign has never purchased advertisements from New York Press. Carolyn Maloney received the endorsement.”

In the July article Ms. Bungeroth noted Mr. Wight’s promise not to enact anti-abortion policies as part of his larger belief that “health care decisions should be between doctors and patients.”

“Wight is the type of Republican who might stand a chance with Manhattan voters—that is, fiscally conservative but socially liberal,” Ms. Bungeroth wrote. “He believes that the government shouldn’t get in the way of a woman’s right to chose, an opinion that aligns with his political philosophy of getting government out of the way.”

In her endorsement of Ms. Maloney, which was published on Friday, Ms. Bungeroth didn’t give as much credence to Mr. Wight’s pro-choice claims saying he “has said that he is pro-choice, he doesn’t have a platform for promoting continued access to abortion and reproductive healthcare.”

We reached out to Ms. Maloney’s campaign to see if they had any comment. There was no answer at her campaign office. 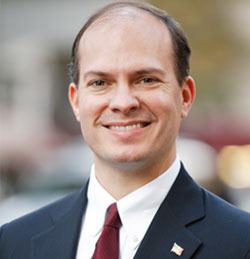