Assemblyman Sean Connors (D-33) grew up in the political high chair of the Hudson County Democratic Organization (HCDO), but today – with the news that he won’t back the re-election of Jersey City Mayor Jerry Healy – he’s off the reservation.

Slamming Healy’s response to Hurricane Sandy, Connors took the opportunity to praise Republican Gov. Chris Christie, who this afternoon formally announced his plans to run for a second term.

“Gov. Christie elevated himself,” Connors said. “He got into the trenches and physically heped us out.”

On the same day he acknowledged distance from the HCDO and Healy, Connors didn’t rule out supporting Christie for governor.

“His numbers have grown very high,” said Connors, a JC police detective. “If we don’t have the right Democrat to challenge Chris Christie, we’ll be wasting resources against him.”

At his Port Monmouth press conference this afternoon, the governor refused to take a shot at Healy concerning the mayor’s response to Sandy. “Assemblyman Connors has his own opinion,” said Christie. “We’re in the process of doing an after action assessment. We’re gathering information from all the counties.

What about Newark Mayor Cory Booker?

The assemblyman’s withdrawal of support for Healy sent a shock wave through the Hudson County political world, and caused veterans to savage Connors off the record with the allegation that he demanded a job that Healy couldn’t deliver.

“That’s not true,” said Connors, when PolitickerNJ.com asked him if he tried to land a job from Healy. “Unequivocally not true. I could retire next year from the police department. I have 25 years in.”

For at least several weeks, sources have buzzed about Connors running for a ward seat on a ticket with Healy. Per statute, he would have to have given up his police job to sit on the local council.

Today, Connors was coy about his connective tissue to Fulop, whom he bashed not long ago as a rich man’s candidate.

“I would consider supporting him,” said Connors, who added that he would prefer to run for re-election than seek a local council seat.

“I love the position I’m in,” he said. “I want to see what Councilman Fulop’s overall plan is for the city.”

He has ruled out his own run for mayor.

“I feel bad that Healy resorts to ridiculous allegations to save face but it is not surprising,” said the mayoral candidate. “There is no truth to any of it but the reality is that their Ward F loss, and the Connors event their campaign is falling apart so it is not surprising they will try to throw around crazy accusations.”

As for Stack, the renegade senator at odds with the HCDO, and the top of the ticket in the 33rd, “He’s doing a wonderful job,” said Connors.

Already on record saying the sitting GOP governor is the “best ever,” Stack is a potential public backer for Christie 2013. 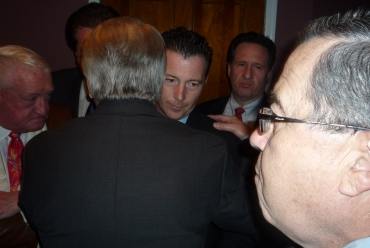