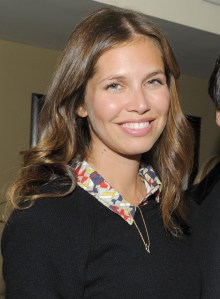 Is “curate” the most overused word of the past few years? Everyone at the annual Independent Curators International benefit auction last Monday seemed to think so. Which made sense, if you think about it. These people had paid top bucks to celebrate the field, so you knew that it had to bug them extra when the word is used to describe websites or outfits, what have you.

“You can curate a living room,” said the artist Sheree Hovsepian, rolling her eyes slightly. Asked for the verb’s dumbest use, in her experience, she had to go with the time she’d heard it applied to a cocktail list.

But enough about that. The curators, collectors and men with cocktail-dispensing tank backpacks had gathered at the Prince George Ballroom to raise money for ICI and to toast Dasha Zhukova, winner of this year’s Leo Award.

The award puts the super collector in the ranks of past winners like Chuck Close and Roy Lichtenstein, and in her acceptance speech Ms. Zhukova celebrated ICI’s ability to “mold tomorrow’s museum professionals.”

No help was needed in forming consensus in the auction, though, which saw spirited bidding for its top lots. A small painting by the artist KAWS, who would have a float in the Macy’s Thanksgiving Day Parade a few days later, went for a whopping $21,000, thanks partially to the plaintive style of auctioneer Alexander Rotter, head of the contemporary department at Sotheby’s.

“I hope I wasn’t too obnoxious,” Mr. Rotter said after the bidding. “But as a charity auctioneer, obviously it’s different than it is at Sotheby’s. You can kind of poke at them, you make them feel really bad about themselves. But that’s the trick, you know? They wouldn’t be here if they didn’t want to give.”

He demonstrated the appropriate method for eliciting a bid, leaning forward with his hands open and his eyebrows raised solicitously. “Do you want to bid?” Eye contact, he said, is very important, even from across the room. He’d even managed to nab a number of $5,000 bids for a lot that purchased the bidder nothing but the assuagement of guilt. “I picked some people who I knew could afford it,” he said.

In all the night took in $330,000 for the organization, money that curator Hans Ulrich Obrist said would go to shaping the future of extra-website curation.

“It’s very important because there are not many grants for curators,” he said. He curated his own first show in the kitchen of his apartment in Switzerland as a student, with works by Fischli/Weiss and Christian Boltanski. Hans-Peter Feldman decided he wanted to exhibit in the refrigerator, a bit of institutional critique, “so it was an exhibition within the exhibition, like a Russian babushka.”

It was fun, but not the ideal circumstances for curatorial training. “I got a grant from the Cartier foundation,” Mr. Obrist said. “And it changed my life. For three months I went to Paris, I could visit studios. Everything happened, kind of, because of that. So it’s important to support the beginning because it makes a huge difference.”

“You can’t teach taste,” said ICI Executive Director Kate Fowle, in agreement. “But you can learn how things work and how not to reinvent the wheel.”