Like Chelsea these days, the closest town to the Chernobyl Nuclear Power Plant, Prypiat, is largely populated by workmen. They live in the ruins there not by choice but because their job is to pour concrete, over and over again, on the disintegrating reactor, and it’s thanks to them that all of Eastern Europe is not poisoned by radiation.

These men would tease the artist Diana Thater when she was there in 2010 filming for her installation Chernobyl, which opens at David Zwirner gallery tomorrow. A Los Angeles native, she would bundle up with several layers of hoodies to prowl the abandoned buildings there, accompanied by an entourage that included a Prypiat forest ranger, a scientist, an assistant and a translator.

“The locals would always yell at me, ‘Hey! Where’s your stalker?'” she said Thursday at the gallery. The reference is to the 1979 sci-fi film of that name by Andrei Tarkovsky, in which men called stalkers lead tourists through the supernatural Zone.

Though the film was pre-Chernobyl, it does have an eerie resemblance to Ms. Thater’s movie. The film shows scenes of the wilderness in all its forms, dismal apartments with peeling wallpaper, the geese that swim on former cooling lakes, the wild horses that walk the streets of Prypiat.

There’s also some enjoyably complicated framing in Ms. Thater’s film. It’s projected on six walls of the gallery, projections that show not the nature scenes themselves, but film of that footage being played in Prypiat’s movie theater, the front and back screens dominated by the image of a desolate auditorium in a local school. The projectors shown in the film are in the room with you, and the work gained a meatier context Thursday, as men cleared Sandy damage in the next room, pulling in the street outside, where trucks unloaded dumpsters in front of the Kitchen. The neighborhood, the city at large, fell into the piece.

“David [Zwirner] thought it would be great to put this piece in the context of a hurricane,” Ms. Thater said. “Not that a nuclear fallout can be compared to a hurricane, but the imagery resonates and I think that’s what David was after, this kind of play.” Yesterday there was no heat in the gallery, but after Prypiat Ms. Thater had no complaints. “At least there’s no radiation,” she shrugged.

The show had been originally scheduled for January, but was thrown together last Thursday as soon as Mr. Zwirner had realized he could do a show for this week. It has been acquired by the Stedelijk museum in Amsterdam, and been shown around the world, but never before in New York.

“People consider me a colorist,” Ms. Thater said, “because I work a lot with color and color has great meaning in my work. This is a work where that’s not necessary.” She gestured at the rubble and a giant mural of Lenin, now fading, “this is complicated enough.” 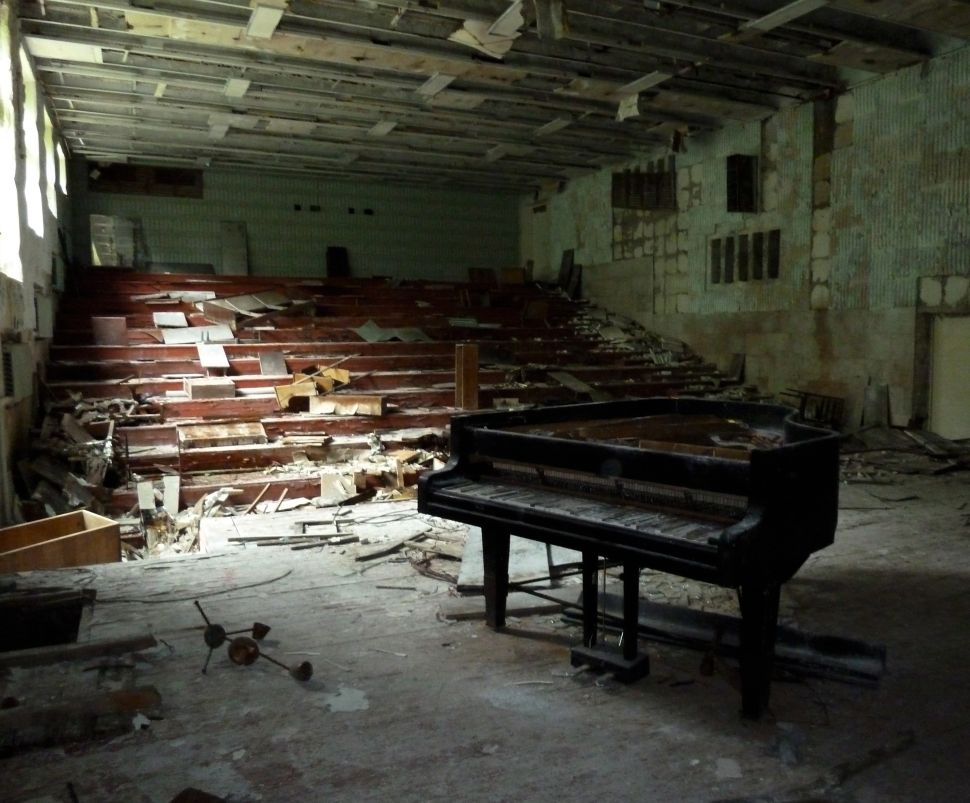