[Ed. note: When Hurricane Sandy hit the art district in Chelsea, it put the following three exhibitions on pause. All three galleries plan to have the exhibitions open again soon, however, possibly within the week. Please call them for further information.]

Jason Brinkerhoff draws women. In the first small untitled piece in his exhibition “Some Women” he gathers together nine or 10 of them, sitting, kneeling or leaning over, in a tightly chaotic grouping with the accidental elegance of a compositional palimpsest. Rendered in black graphite with the loose, curving line of an academic painter’s first sketch or a fashion designer’s last, the figures are overlaid with pink pencil and partially colored in with wax pastel, spray paint, oil and acrylic, creating a final effect of frantic, unresolved obsession.

Mr. Brinkerhoff will try anything to get at his singular subject. He draws from life, fashion photography and art history, plucking eyes from Brâncuși, poses from Vogue and biomorphic collage from Matisse. He renders the body with close affection, as a final, concrete truth, and treats it as merely a pretext for formal experiment. It’s an abstraction of perfect curves and circles, called into being by the male gaze—even his most realistic life drawings have impossibly circular breasts—and it is its own carnal reality, an animal that gives birth and shits. One series of paintings features a repeated figure seen from what can only be called an obstetrician’s view. Some are only notionally human figures, while others, especially one pencil drawing of two girls seated together, capture living personalities with transfixing economy.

The frequent use of collaged paper ovals in place of the figures’ faces can read as both Duchampian humor, like a clown nose on an undertaker, and an uncomfortable lingering on the line between critique and misogyny—and sometimes simply as impatience. But it may also be that blank masks are more true to life than the faces Mr. Brinkerhoff draws so well, because what drives his fascination with women as a subject is that he hasn’t yet figured them out.

Psychiatrist Leo Navratil began asking his patients to draw for him in 1954, published Schizophrenie und Kunst (Schizophrenia and Art)in 1965, and, despite a skeptical view of the non-therapeutic merits of what he considered “condition-related art,” scored his patients their first formal entry into the art world with a group show at Vienna’s Galerie nächst St. Stephan in 1970. Johann Feilacher, Mr. Navratil’s successor, changed the emphasis from therapy to art for art’s sake, and in 1986 he renamed the building outside Vienna where his patients live “House of Artists.” “The Artists of Gugging,” at Ricco-Maresca, includes work by eight of these artists, which range from Johann Korec’s incandescently intense watercolors to Franz Kernbeis’s ghostly, portentous graphite apparitions. What most of the pieces have in common are distorted conceptions realized with religiously sharp lines.

August Walla’s untitled graphite drawing shows a many-knuckled, pigeon-toed God, dressed in a robe with six patch pockets, standing over a cute little house, while above him, clearly labeled GOTT, a separate incarnation sits in heaven with two rockets, two totemic trees and a multitude of branches. Nothing is filled in; there is only the line. But each branch is exactly as wide as the spaces between it and the surrounding two, so that altogether the space is quivering and striated, neither black nor white, neither at peace nor really moving. Johann Hauser’s oil crayon red devil is so exuberantly sinister as to be cheery, while his Rote Rakete (Red Rocket), a recumbent, whale-shaped missile with two floral fins around a little green orifice, seems to stand, like Moby Dick, for almost (but not quite) everything in the world.

My Bag, one of the coffin-sized, envelope-shaped tan canvas bags that comprise Seth Price’s exhibition “Folklore U.S.”at Friedrich Petzel’s new space on 18th Street, has straps wide enough to carry gold bullion or securely buckle a straitjacket, and is lined with white linen emblazoned with UBS logos. (The logo shows three crossed keys, one more than St. Peter has.) Bringing to mind 16th-century sumptuary laws, “packaging” as a metaphor for marketing and the creation of identity, and tourists buying counterfeit Gucci on Canal Street, it offers a straightforward enough critique of the arbitrariness of all human values, aesthetic as well as economic. The question is, if you get a splinter in your finger and the skin closes over it, have you been infiltrated, or has the splinter been co-opted?

To go with a full season’s line of “bags,” there are more literal envelopes painted on sheets of plywood, a couple of garments like Tony Outfit, an exploded white parachute suit lined with the comfortingly clean and fungible golden lettering of American Express World Service, and then, covering most of the walls, an extensive formal inquiry into compartmentalization. Mr. Price covers square frames in vacuum-formed clear plastic and then runs through an extensive series of superficial variations: he fills the squares with gatorboard or leaves them empty; colors the plastic from the underside with acrylic, enamel, epoxy, marker, resin or powdered pigment; turns squares into door-sized rectangles by putting two together; or ornaments them with dynamic coils of knotted rope that press painfully through the surfaces like Han Solo in carbonite, sometimes partially unbraided but still spiralling like DNA, sometimes tumbling backward out of the plastic, sometimes hanging down behind the frame as in a Japanese omamori. The gamble is that speaking the truth can acquit you; the question is, can anything live inside vacuum packaging? 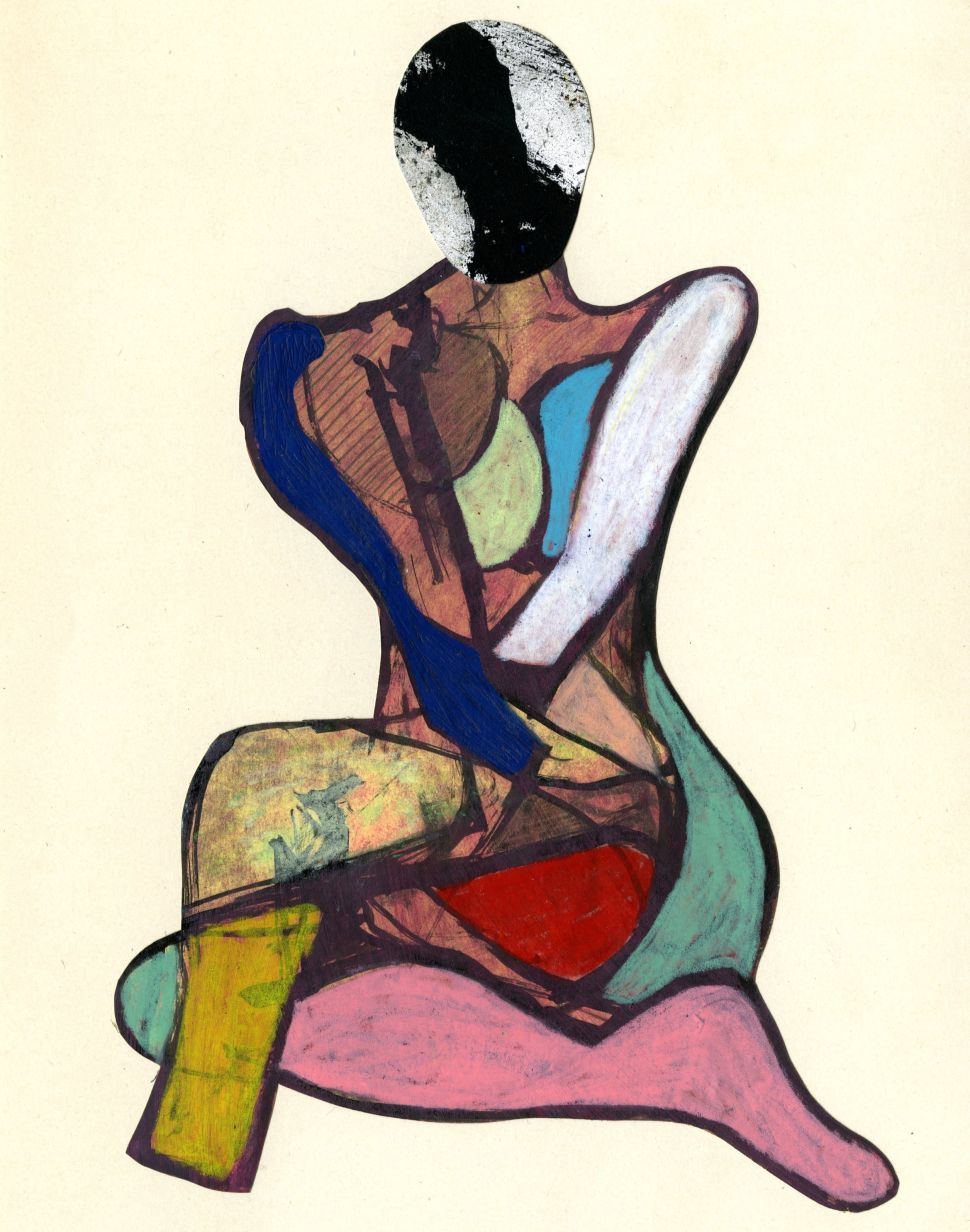