In the aftermath of congressional redistricting and a subsequent 9th District Democratic Primary bloodbath, the state found itself treated to 12 virtual non-contests that not even the most exorcised press handlers could make compelling.

Six Democrats and Six Republicans stayed cemented in their chairs of power at the end of Tuesday’s night’s election, prompting Obama-energized New Jersey Democrats to point a finger in the direction of the same Heldrich Hotel staircase leading up to the backrooms where Republicans last year crafted the successful congressional redistricting map.

“As you know, this map was a product of 13th member John Farmer,” said State Democratic Chairman John Wisniewski. “He started with certain conditions, including protecting certain incumbents, and that produces a 6-6 delegation.”

Sources say Farmer’s thinking was that the 7-6 balance of the old map was upset by the loss of a seat. The population deficit that caused the loss was not spread evenly throughout the state, but concentrated in one area.

The top three districts in terms of population deficit all happened to be D districts; not politics – just a demographic reality.

According to sources close to the tiebreaker, in order to preserve their seven seats, Democrats presented pretzeled districts that swerved from Farmer’s priorities of compactness and continuity.

The end result – Tuesday – infuriated Democrats stuck with an exactly even representation of Democrats and Republicans in the U.S. House, in spite of Obama’s 17-point win over Romney, and U.S. Sen. Bob Menendez’s (D-NJ) blowout of state Sen. Joe Kyrillos (R-13).

But while Democrats blamed that map on their party’s inability to capitalize on the president’s 17-point trouncing of Republican challenger Mitt Romney, the chief GOP commissioner said strategy – not the map alone – played a role in Tuesday night’s outcome.

Mike DuHaime, who led the redistricting commission for the GOP and submitted the winning map to Dean John Farmer, described the document as exceedingly fair.

“As the results show,” said the Republican operative.

“The Democrats had three districts where they reasonably could have won given the voter registration and past election results (CD 2, 3 and 5),” he explained.

Incumbent U.S. Rep. Scott Garrett (R-5) defeated unfunded Democratic challenger Adam Gussen of Teaneck, 55.5% to 42.5% in a contest some Democrats say was closer than it should have been given Gussen’s financial nonperformance.

“In CD 5, Congressman Rothman chose to move his home and run against a fellow Democrat, so Congressman Garrett was able to win comfortably without a strong challenge in what had become a much more competitive district,” DuHaime said. “In CD 2, Congressman LoBiondo is simply an excellent Congressman, so Democrats are unable to beat him in what is a Democrat-leaning district. This is a testament to his decades of service to South Jersey. And in CD 3, Congressman Runyan has turned out to be a very effective Congressman, and he was rewarded with a convincing re-election.”

“It is hard to blame the map when our members of Congress were simply much better and stronger than the challengers the Democrats offered up,” DuHaime said.

Still, Wisniewski noted District 3’s loss of Democratic-dominant Cherry Hill and addition of Brick as a significant challenge for Adler.  “We saw the numbers and the exclusion of Cherry Hill made it very difficult for her to win,” the state chairman said.

“The map John Farmer decided on creates a 6-6 division,” Wisniewski insisted. “There are extraordinary events that move an electorate, but absent fallout from a Watergate, for example, this is pretty much what it is.”

Several Democrats fixed on Teaneck Deputy Mayor Gussen’s respectable showing with no money against Tea Party darling Garrett as evidence that a better financed candidate could have given Garrett a real race.

“It’s always a fair observation that a challenger with more resources could have done better,” acknowledged Wisniewski.

Patrick Murray, political scientist and polling director for Monmouth University, agreed for the most part with Wisniewski’s assessment of the map’s incumbent-protecting priority.

“Challengers would only have had a shot at open seats,” Murray said. “Every incumbent was protected. The map’s unfair simply because it wasn’t drawn with community of interests in mind. It was drawn to protect incumbents.

“The biggest winner was Rush Holt,” he added, “who became much more solid in his district.”

”Based on Tuesday night, the 3rd opens up again with no incumbent,” Murray said in a nod to Runyan’s nine-point margin of victory.

“The second district like that could be the 5th maybe if it opens,” Murray added.

Criticized by his party and the media for failing to run against Garrett and instead facing U.S. Rep. Bill Pascrell (D-9) in a Democratic Primary that finished his congressional career, Steve Rothman might have beaten Garrett, Murray said.

“But he might not have,” he added. “Hindsight is always 20-20. It’s more Garrett’s than Rothman’s district by a long-shot, but considering Obama’s turnout in New Jersey, maybe he could have done it.”

Notwithstanding Tuesday night’s results and the map’s leading role, Wisniewski said “it’s not baked for a decade.”

“Populations are not static,” said the party chairman. “Over the course of a decade, populations move the map. It’s conceivable, for example, to see Democratic populations move from Hudson and Essex into the 5th District over that time period and make the 5th more Democratic.” 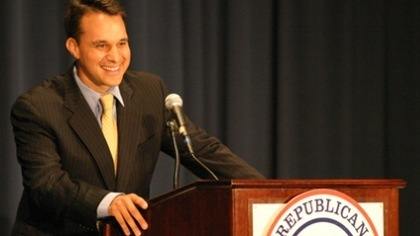