“He hasn’t said anything to me about it,” said Phil Thigpen, chairman of the Essex County Democratic Committee, referring to a potential Booker run for governor. “I hear he’s talking to chairmen but he hasn’t talked to the chairman of Essex County. I’m not sure what’s going on. This could be a dress rehearsal for 2016, for all I know. I have to be an interested observer like everyone else. We’ll just wait and see.”

“That’s between him and me,” Essex County Executive Joe DiVincenzo told PolitickerNJ.com when asked if he and Booker have talked about a prospective Booker run for governor.

Effusive in his assessment of the mayor, there’s also no organizational evidence that DiVincenzo wants any part of Christie versus Booker. The county’s powerful Democratic Party county executive has a great relationship with Christie, so he’s not exactly bucking for a general election fight, and that’s putting it mildly.

He heaps local praise on Booker.

“I’m so proud of what’s going on here in Newark, especially these last six years with the leadership of Newark Mayor Cory Booker,” the county exec said, and others at a ribbon cutting event today fleshed out some of the corporate block building, including a Marriott ribbon cutting, a new Prudential World HQ, Teachers’ Village underway, and Panasonic opening in the city.

There’s just no additional room for Joe D. – obviously, given the contours of the political relationship between Christie and DiVincenzo – to give public utterance to a party war cry against Christie.

Booker also must consider further political diffusion in this county’s Democratic Party, part of it in the form of a local South Ward under the auspices of former Mayor Sharpe James, committed to exacting political payback on the mayor; and in a softened West County environment, where sources say state Sen. Richard Codey (D-27) has talked to party chairs about his own – not Booker’s – 2013 run for governor.

What it translates into is zero Democratic Party organization chest-thumping here for Booker in his home county as sources say he mulls a run.

Against that less than ideal backdrop, Booker is encountering members of his own team telling him they don’t think he should run against the sitting GOP governor who sits atop a 67% job approval platform and enjoys close ties to Democrats like DiVincenzo.

A source told PolitickerNJ.com the mayor’s political feel-out effort beyond Essex County contains a consideration of a future U.S. Senate run.  But other forces in the party remain hopeful of the mayor throwing in against Christie despite Hurricane Sandy catapulting the sitting governor’s numbers into almost untouchable territory, for the moment.

Complicating matters for Booker is the fact that local politics hardly provide a zen-like cone of quietude while he stares at a self-imposed mid-December deadline for making a decision about governor.

A week after City Hall descended into a maelstrom of bad behavior following the mayor’s tiebreaking vote to fill a council seat in his favor, the Booker administration summoned a feel-good story, out of Rock Plaza Lofts: 80 renovated residential downtown units, including a 20% portion of affordable housing stock.

As the Booker administration appeals to a judge to uphold the council vote or compel the council back to City Hall for another consideration of the new council person, according to a report by the Star-Ledger, a circus tent appeared this afternoon at the intersection of Market and Mulberry.

At-Large Councilman Luis Quintana still bristled with a hurtful email message he said he received from former Mayor James, who had wanted to derail Booker from getting a majority on the council and blames Quintana, his former deputy mayor, for voting with Booker instead of the allies of James.

“It’s one thing to come after me,” said Quintana. “It’s another thing when you say something bad about my family.”

When Quintana walked into the event today, he pounded a hand into the outstretched grasp of the mayor, and bookended Booker along with At-Large Councilman Carlos Gonzalez.

“Doing things in Newark is not easy, it’s difficult,” said Booker. “The next five years in our city are going to be some of the most exciting in our country. The wheels have been greased. Newark is the place to be.”

Wrangling in court, Booker’s allies know if they win, the mayor’s life will get a little easier, at least, as a 5-4 council majority will enable him, for example, to secure his long sought-after revenue-generating municipal utilities authority (MUA).

The mayor today praised the community confluence of interests that gave rise to the lofts and accompanying Dinosaur Barbecue, flow-over features of a downtown neighborhood renovated around the anchor of the Rock Prudential Center.

“Let no one say ever again that Newark isn’t a major international city when the Rolling Stones are coming here,” said Jeff Vanderbeek, owner of the New Jersey Devils.

But when he took a reporter’s questions after the ribbon cutting, the mayor considered last week’s local conflagration, not governor.

“People came in there to yell and scream,” said Booker. “There should be respect for our governing body.” 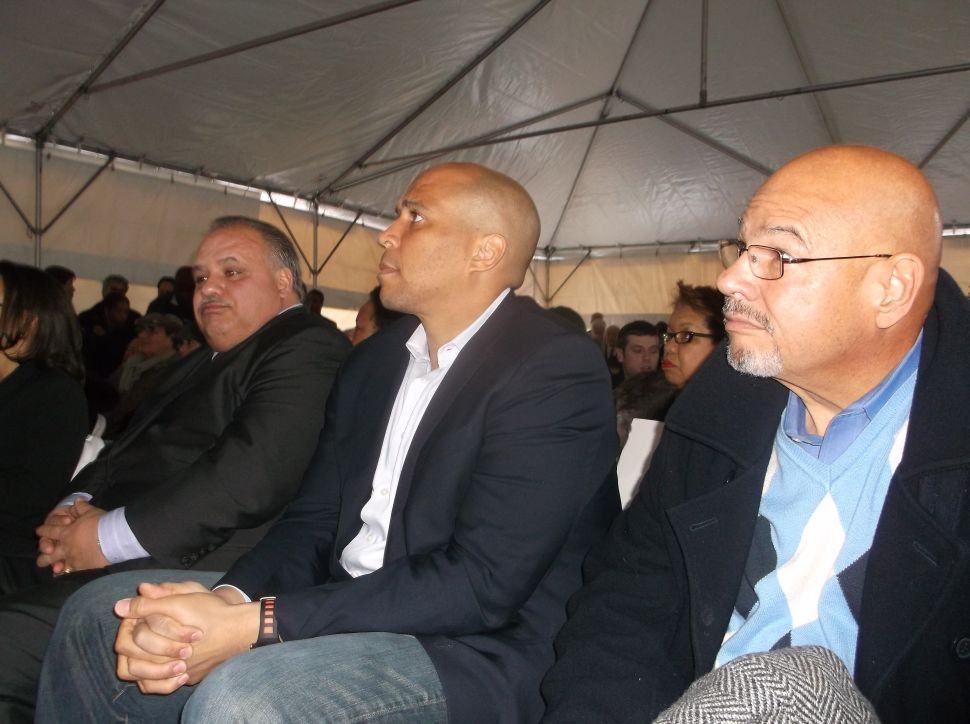