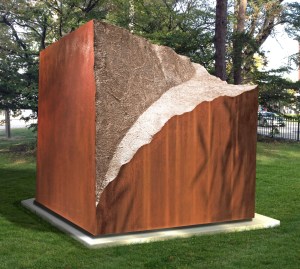 Sculptor Jonathan Prince’s Vestigial Block has been permanently installed at the recently-opened Eli and Edythe Broad Art Museum at Michigan State University in East Lansing. The piece was donated by Julie and Edward J. Minskoff and is one of three works currently featured in the museum’s sculpture garden.

Vestigial Block was first exhibited at the Sculpture Garden at 590 Madison Avenue in New York as part of Mr. Prince’s “Torn Steel” exhibition. Another work by the artist, called G2V, is currently on view in New York at the Dag Hammarskjold Plaza near the United Nations building.