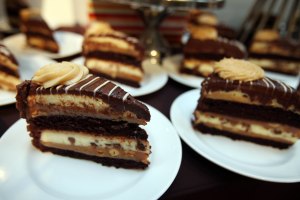 It’s a time of transition at the Whitney! Today the museum announced the three curators who will organize its 2014 biennial, and tomorrow evening, Jay Sanders, who co-curated the 2012 show and was named a full-time curator of performance this summer, will present his first event in that role. (He’s also responsible, along with curator Chrissie Iles, for the just-opened exhibition “Dark and Deadpan: Pop in TV and the Movies.”)

The event he’s organized for Friday, tantalizingly titled Emergency Cheesecake, is presented in collaboration with Wade Guyton, whose really handsome show, “Wade Guyton OS,” is on view on the museum’s third floor through Jan. 13. The two go way back, and Mr. Guyton’s partnership with Kelley Walker, GuytonWalker, was represented by Greene Naftali, where Mr. Sanders used to work as director.

“We had this idea that we could co-curate a group of younger artists that he and I know,” Mr. Sanders said earlier this week. “You see a kind of emerging generation of people who work across mediums, and it’s a chance for them to do something new and different. It’s a party event—music, action, film and video.” (It’s also pay-what-you-wish night!)

Among those on tap for Emergency Cheesecake are Amy Yao and Lisa Jo, who will present a new trailer for their forthcoming film “Sorry, can’t talk, I’m at work” CISF, I.U.D. (a band formed by Lizzi Bougatsos and Sadie Laska) and the combined forces of Sam Pulitzer and Mathieu Malouf.

Virginia Overton, who’s better known as a sculptor, also has a piece in the works. “It’s going to involve a pickle, and something special is going to happen,” Mr. Sanders said. “She’s kind of keeping me in the dark a bit.”

Mr. Sanders is planning more one-off performances in the future, and is also planning programming for “Blues for Smoke,” a MOCA Los Angeles show centered on the blues that arrives at the Whitney in February.

As for the title of Friday’s program, Mr. Sanders was tight-lipped about its exact source, but a Google search brings up a fine-looking array of recipes and images.