1. Even for a show about espionage, this episode was unusually concerned with the seen and the hidden (Quinn disrobing in front of Carrie; Aileen asking for a window, talking about the light, needing reading glasses; Brody hiding his scars from eager watchers). What did this episode allow us to see/understand that was previously hidden?

I’m pretty sure this one was just a set-up. Two words: Quinn ass.

2. Quinn seems to say what Carrie is thinking several times, most notably “Brody is everything.” Chart the likelihood that Quinn has actually died and is now just a Tyler Durden-esque outgrowth of Carrie’s subconscious.
I’d say these two were Tyler Durden-esque, but that would assume one of them was the manifestation of the other’s nihilistic tendencies. In fact, Quinn and Carrie are the opposite of Tyler Durden: Instead of being one person split between his desires and society’s demands, these two think exactly alike. They both run around like they are all id and superego but no ego. I mean, was it any coincidence that Carrie saw how cray-cray it looks when you wake up from being exploded in a terrorist attack and your first instinct is to pull out the I.V.s and go back in the field? Neither of them have any control over their impulses except where they draw their own moral lines. If this was another kind of show, they’d be superheroes. Like Batman. Or super villains. Like Bane. No, the Joker. No, Bane. I’m going to stick with Bane.

3. The Talmudic rabbis claimed that every line in the bible could be interpreted in four distinct ways. How many different levels of meaning are present at once in Carrie’s conversation with Mike? (E.g., “I hope you get what you want.”) How many of these levels is Carrie aware of?
Okay, Saul.
1. Agent Mathison: This is the Carrie that’s relating to Mike as a professional; a member of the C.I.A. telling him to “back off” his investigations into Brody because it potentially jeopardizes their entire mission. (Hence, “I hope you get what you want” could actually be seen as somewhat of a threat. As in “I hope you get what you want, but don’t go around trying to get it to happen because we will disappear you so fast your assistant’s head will spin.”)

2. Compassionate Carrie: This is the one that Carrie pulls out of her sleeve and uses on Brody a lot when it’s convenient. She allows Mike to see that she’s in a similar situation as he is, without revealing that he’s part of the reason why she’s in that position. (Hence, “I hope you get what you want … because I too, want someone who desires me but is unable to be with me because of familial obligations.”)

3. Crazy Carrie: The next layer on the cake is the Carrie we all know and love, the one who only understands the world through Brody-filters. (Hence, “I hope you get what you want because that means I’ll get Brody and then you and Jessica can move far, far away, and while I don’t hope you die because someone needs to take care of Dana–who I will reintroduce myself to later in the episode like I’m Jack Donaghy’s avian-boned fiance on that season of 30 Rock–I will not want her to be part of our lives. The younger one, maybe.”)

4. Off her meds mental patient: Here is the one who is about two blue pills away from causing another 9/11 because she’s about to tell this guy Mike the world’s shittiest-kept secret. (Hence … exactly above, but she says it out loud, and then gets all crazy-eyed.)

4. By this point it has become clear that Carrie is using her real feelings for Brody in part to control him, and Brody explicitly acknowledges that he knows this. How does this map onto Homeland‘s increasingly obvious methods of manipulating its audience?
Oh, I love the idea that this is the writers’ way of tackling the issue of government transparency in foreign relations. “Look, when one of us asks another one of us if we are just manipulating each other, and our answer is ‘I don’t know,’ that’s our way of telling you that we are definitely manipulating you. And just as Brody ‘likes’ being manipulated by Carrie (which, by the way, keep it in the bedroom you guys!), you too have come to love of us despite of … nay, because of … all this fantastical bullshit we keep throwing your way.” Note: This only refers to white people.

5. Once again, Carrie’s incompetence ends up looking like competence, while Saul’s professionalism ends up making him look like a buffoon. If you were Mandy Patinkin, how would you feel about what the writers have done with your character? How about if you were Bill Hader?
Er … I’m not really sure what you are referring to here. Carrie was actually quite competent (and surprisingly compliant with the C.I.A.) this week. Saul was not being professional; he let himself be emotionally manipulated by a desperate woman, per usual. So: competent? 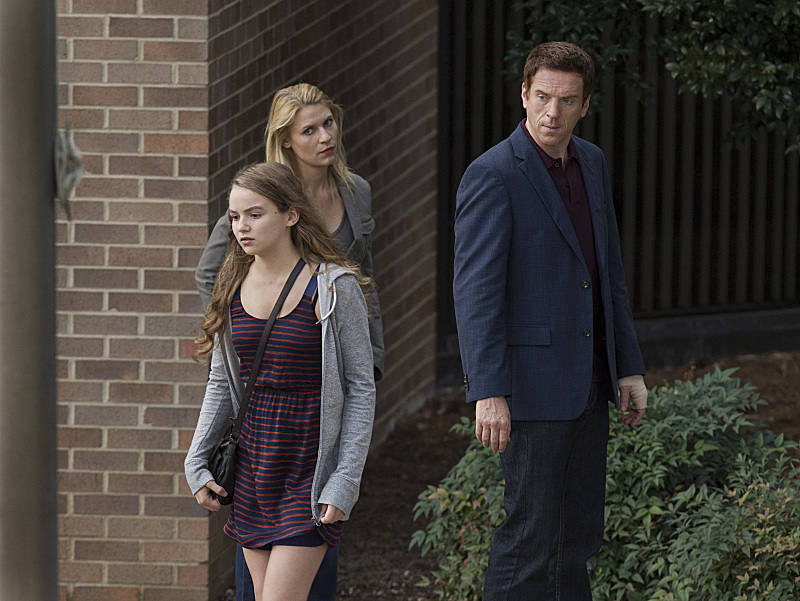